Former New York City mayor Rudy Giuliani this weekend helped to illustrate what I was getting at last week when I suggested that G.K. Chesterton’s anti-Semitism has something to teach us about racism and white supremacy here in 21st-century America.

Chesterton wrote of what he called the “Jewish problem.” The nature of that problem was simply that Jews exist. Chesterton viewed Jewish people as “foreigners, only foreigners that were not called foreigners” — meaning they were perpetual aliens whose allegiance, he was convinced, must always lie elsewhere. Therefore, for Chesterton, Jews could never be trusted — they must always be viewed with suspicion, as guilty unless proven innocent.

This idea of a “Jewish problem” became the lens through which Chesterton viewed any discussion Jewish people and their rights as citizens. With that lens in place, Chesterton didn’t need to deny the obvious reality of anti-Semitic prejudice or to deny that Jewish people, as a minority, often suffered from injustice. His “Jewish problem” construct enabled him to reinterpret all evidence of such prejudice in a way that reinforced his own anti-Semitism and, in his view, justified such prejudice. If those untrustworthy Jews have been treated unjustly, then that’s just more reason not to trust them — they’ll want payback.

The “problem” half of Chesterton’s “Jewish problem” construct was his way of acknowledging that such injustice existed, and even that it was regrettable. But this way of framing the “problem” stunted his otherwise brilliant intellect — restricting his ability to even think about any ways of solving this problem that didn’t involve placing all of the blame for it exclusively on the shoulders of the victims themselves. Thus even a brilliant man like Chesterton made himself stupid. He rendered himself incapable of recognizing the basic distinction between injustice done against Jews and injustice done by Jews.

This same stunted, stupid-making framework is at work here in 21st-century America in much of our discussion about “race.” Every day, somewhere on your television and your radio dial you will find white people discussing race and racism as “the Black Problem.”

Former New York City Mayor Rudy Giuliani (R) got into a heated argument about race and crime with Georgetown professor Michael Eric Dyson during a discussion on Ferguson, Mo. 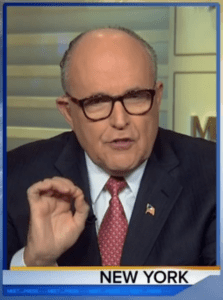 “But the fact is, I find it very disappointing that you’re not discussing the fact that 93 percent of blacks in America are killed by other blacks. We’re talking about the exception here,” Giuliani said on NBC’s Meet the Press while discussing whether police forces reflect the demographics of the communities they serve.

Dyson called this a “false equivalency.”

“Can I say this, first of all, black people who commit crimes against other black people go to jail. Number two, they are not sworn by the police department as a agent of the state to uphold the law,” he said. “So in both cases, that’s a false equivalency that the mayor has drawn, which is exacerbated tensions that are deeply imbedded in American culture.”

Later in the argument Giuliani argued that while police officers are only present in certain communities because black people are committing crimes.

“It is the reason for the heavy police presence in the black community,” he said. “White police officers won’t be there if you weren’t killing each other 70 percent of the time.”

I cannot believe that Rudy Giuliani is as wholly ignorant as he pretends to be when he repeats this hogwash about “you’re not discussing” black victims of black violence. I do not believe that it is possible that a man who served for years as the mayor of New York City is completely unaware of the witness of the black church in New York. This is a deliberate, brazen lie on Giuliani’s part.

It is a lie frequently told in America as part of what Ta-Nehisi Coates calls “The politics of changing the subject“:

The notion that violence within the black community is “background noise” is not supported by the historical record—or by Google. I have said this before. It’s almost as if Stop The Violence never happened, or The Interruptors never happened, or Kendrick Lamar never happened. The call issued by Erica Ford at the end of this Do The Right Thing retrospective is so common as to be ritual. It is not “black on black crime” that is background noise in America, but the pleas of black people.

Nothing Coates says there is new or news. And none of it is unknown to Rudy Giuliani. When Giuliani speaks as though he does not know all of this, he is simply lying.

Giuliani is lying — and doubling down on those lies — in service of the construct of “The Black Problem.” That is the only frame Giuliani will allow for discussion of the injustices faced by black people in America. When an unarmed black person is killed by a white police officer — as happens here in the U.S. about once a week — Giuliani, like so many others, is desperate to force that slaying into the constricted framework of “The Black Problem.” The blame for such unfortunate events must, somehow, be attributed to some intrinsic quality of these perpetually suspect “foreigners that are not called foreigners.”

The point here is not simply that what Giuliani is arguing is racist, but that he has accepted — and is promoting — a framework that doesn’t allow for any thought or response that could ever be anything other than racist. The framework of The Black Problem allows for different degrees of white supremacy and slightly different gradations of racism, but the construct redefines the subject in such a way that any non-racist response is prohibited. Any such response is, for people like Giuliani, unimaginable.