Postcards from the culture wars (12.3)

“They think that a passionate desire for equality rises from a place of hatred rather than from an abiding sense of fairness. They misunderstand equality as the destruction of one group instead of the salvation of another.”

“As a black member of a majority-white congregation after the Brown and Crawford incidents, I find it alienating when a pastor ignores these issues or halfheartedly speaks about ‘diversity.‘ It is hurtful when he talks about racism as if it is something with which both black and white people have to contend equally.”

“No, voter ID supporters might not hold racial animus, but they end up in the same place as a racist who does: Supporting laws that restrict the vote and hurt minorities.”

“The long history of associating immigrants and disease in America and the problematic impact that has on attitudes toward immigrants should make us sensitive to the impact of ‘othering’ African immigrants to the United States in the midst of the current Ebola outbreak in West Africa.”

“The noose is a uniquely American symbol.”

“We ain’t taking no n*ggers here.” 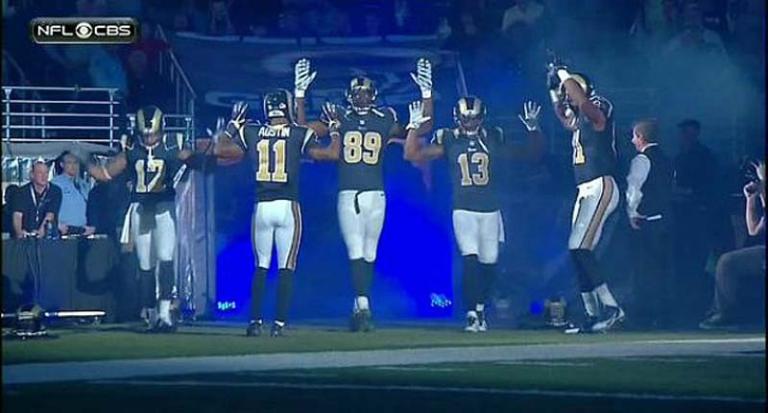 “Hansen said he was the victim of a ‘carefully orchestrated attack to remove a conservative Republican from a major leadership role in State government.'”

“President Obama has faced three times as many threats as his predecessors, according to people briefed on the Secret Service’s threat assessment.”

“‘Many hours of praying’? My goodness, she gave the big guy an earful.”

“Walking, with my hands in my pockets. Walking.”

“I don’t know, but the law is the law and you’re under arrest.”

“It wasn’t really meant to be a threat; it was more or less to wake them up to what was going to happen down the road.”

“White evangelicals feel disenfranchised, marginalized and discounted even though, in Texas, they have the body politic by the short and curlies.”

“Your kids are getting shafted.”

“I don’t know if the good conservative Christian white people of Georgia will eventually hold rallies to honor Darren Wilson the way they did for William Calley, but it would not surprise me at this point.”

“Earlier this month, district officials hired a private investigator to find out if the 7-year-old girl actually lived in Orinda.”

“This is not some person I read about. This is my mother.”

“People may absorb these things without knowing them.”