Left Behind Classic Fridays, No. 12: ‘The Naked Truth’

According to Left Behind, the clothes of true believers will, like heathens and liberals, be left behind. This means both a sudden influx of nudity in Heaven and the sudden appearance, here on Earth, of billions of piles of unoccupied clothes.

If you saw a dozen people instantaneously vanish, leaving only a pile of clothing where they formerly stood, you would probably take a look at those piles of clothing to try to figure out what just happened. But then you’re not a character in Left Behind. …

Here we read with greater detail — although less detail than we might like — of how LaHaye and Jenkins envision the bodily rapture of believers, but not of their clothes. Thus:

Harold’s clothes were in a neat pile on his seat, his glasses and hearing aid on top. The pant legs still hung over the edge and led to his shoes and socks.

L&J seem to envision a great gathering in the clouds of all the believers in their born-again birthday suits. At the very least, this invites a rewording of some of the old gospel hymns about heaven: “When the roll is called up yonder, I’ll be bare.”

There’s a logic to this idea, I suppose. Before the Fall, Adam and Eve are described as going about naked and unashamed. So if the shame of nudity is a temporal, this-worldly consequence of fallenness and sin, then one could argue there’s no need for clothing in heaven. (Admittedly, it’s difficult for me to imagine this without also imagining the redeemed frolicking about, playing volleyball.)

This heavenly disrobing also seems a bit suspect coming from the writers who created Rayford Steele — poster-boy for raging lust and repression. There’s a whiff, perhaps, of something lascivious in this unexpected promise of heavenly nudity.

L&J may also be missing a cross-promotional marketing opportunity. Back in the 1840s, William Miller made a nice profit selling his followers white “ascension robes.”

The news that Harold’s eyeglasses and hearing aid are left behind along with his clothes follows the same logic about the restoration in heaven of all that is fallen, broken and less than whole. The heavenly Harold angel will hark without need of a hearing aid.

But reading this about the hearing aid and eyeglasses makes one want to know more. You want Rayford or Buck to examine these piles of abandoned clothes more carefully. Isn’t that what you would do? If someone vanishes leaving only their clothes, wouldn’t you want a closer look at those clothes?

And if the hearing aid is left behind, what about fillings, pacemakers, prosthetic limbs, toupees and silicon implants? In heaven, one imagines, teeth and hearts are healthy, missing limbs are restored, bald head’s bloom like Rosenzweig’s desert, and breasts are, well, everything that breasts are meant to be.

Yet it doesn’t occur to any of the characters on the plane to take a closer look at the rumpled piles in any of the empty seats. Even Buck, the GIRAT, remains steadfastly incurious in the face of this sudden mystery.

Consider again the description of Harold’s clothes and see if it doesn’t remind you of something:

Harold’s clothes were in a neat pile on his seat, his glasses and hearing aid on top. The pant legs still hung over the edge and led to his shoes and socks.

Somehow, no one on the plane is reminded of having seen this exact scene in dozens of “shrinking man” movies. My favorite such example is in the Beatles’ Help, the scene titled “The Exciting Adventure of Paul on the Floor.”

Paul accidentally gets injected with the shrinking serum that was supposed to shrink Ringo’s finger so that he could remove the ring of Kaili. The others look away, then look back, and Paul’s clothes are in a neat pile on his seat. The pant legs still hung over the edge and led to his shoes.

Paul meanwhile, has been miniaturized, slipping down his pantleg and onto the floor where he dons George’s discarded gum wrapper, and bathes in orange soda in an ashtray. 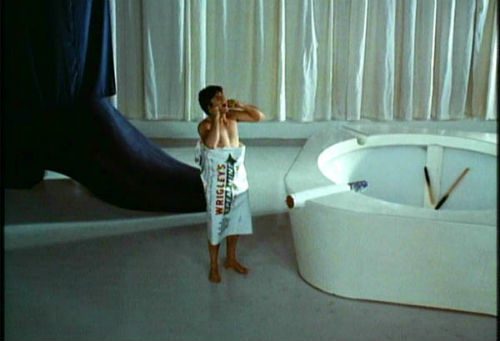 We readers know, of course, that Irene had been right, and Left Behind is a rapture story — not the story of the fantastic voyage by an adventuresome band of microscopic airline passengers. But it seems strange that the characters should know this as well.

Confronted with the bewildering sight of all these Pauline piles of clothes, you’d think it might have occurred to the folks on that plane to tread carefully. If I were on that plane, I’d be checking my shoes on the off-chance that Harold and the others missing were now on safari among the harsh, tree-like strands of the plane’s carpeting, fashioning its microfibers into crude weapons with which to battle gargantuan, monstrous dust mites.

I’m not saying that the shrinking scenario (whether via the filthy eastern ways of Kaili, or via a shrinking ray from some trite hackneyed mad scientist) is the most plausible explanation for the passengers’ disappearance. But it’s no less fanciful than any of the other suggestions that might quickly spring to mind.

These would include, among others: mass hallucination/insanity, alien abduction, rapture/Enochian assumption, spontaneous human combustion, rapid-acting flesh-eating bacteria, wormhole in the space/time continuum, the return of D.B. Cooper and his extended family, and/or an evil sorceror from an alternate dimension plucking away slaves to work in his sulfurous mines. You can probably think of others.

Sherlock Holmes famously said, “When you have eliminated the impossible, whatever remains, however improbable, must be the truth.” Confronted with the apparent impossibility of the mass disappearance, it ought to occur to the people on that plane to begin speculating on the possible, if improbable, explanations.

What’s bewildering is the characters’ lack of bewilderment, their lack of curiosity. No one inspects the piles of clothes. No one seriously attempts to consider who disappeared and what else they might all have in common.

If you were on a plane, and 50 or so passengers suddenly disappeared shortly after dinner, wouldn’t it be good to find out whether or not they all had the salmon?

December 18, 2014
The Bible used to get a lot of things wrong
Next Post