Accept it that soon we’ll be drenched to the bone

Accept it that soon we’ll be drenched to the bone December 22, 2014 Fred Clark

It’s almost 2015. That seems impossible. That’s too futuristic-sounding to be the actual date on a real calendar. It looks more like a “stardate” or like the coordinates some mad scientist should be punching into the console of his time machine.

At a purely rational level, of course, I accept that it is now December of 2014 and that in less than two weeks it will be the following calendar year and I will need to start writing “2015” on checks. But some part of my brain still associates that number with the future. Just look again at IGN’s terrific science fiction timeline, or the one at scifi.wikia. 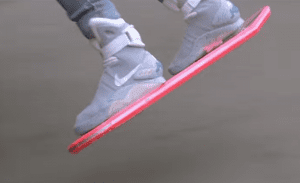 It can’t be 2015 yet, because that’s the future world of hoverboards and holograms from Back to the Future II.

If it’s already 2015, then that means within just four years — during the current term of U.S. senators elected last month — replicants will roam the streets of a rain-soaked dystopian Los Angeles (Blade Runner), the most popular TV show in the world will be The Running Man, and an electromagnetic pulse will turn the Pacific Northwest into a militarized police state patrolled by flying drones (Dark Angel). Those stories were all set in 2019.

I’ve been absorbing stories like those my whole life, and along with that, I’ve acquired the odd half-held sense that the future is a fictional place — that 2015 and 2019 are not real places, but simply the fictional setting for fantastical stories. So, partly at least, the idea that it’s almost 2015 strikes me as like being told that in a couple of weeks we’ll all be in Narnia.

As the years pass by, though, all of those science fiction stories and their futuristic settings have also reinforced a kind of automatic skepticism in response to any predictions made about future-sounding dates. Remember Space 1999? How about 2001: A Space Odyssey? Ray Bradbury’s Martian Chronicles were set nine years ago.

The problem is that neither of those reactions is helpful when I encounter scientist’s predictions about the impending, near-term future. Consider, for example, the projection that by the year 2030, the city of Philadelphia will face more than 30 days of significant flooding every year.

I just wrote “the year 2030” because 2030, to me, still doesn’t quite seem like a four-digit number automatically recognizable as a date. Yet of course it is. And it’s only 15 years away. That’s really soon.

Here’s David Roberts sketching out some of what we can expect for those intervening 15 years, and why it won’t do to think of this planning for the future as an exercise in science fiction:

Rising sea levels don’t have to rise very much before they get annoying, and then burdensome, and then overwhelming. This fact is well-captured in some interesting new research from NOAA scientists William Sweet and Joseph Park. (Over on Mashable, reporter Andrew Freedman has a great write-up.)

Rather than focus on average sea level, researchers focused on the frequency of “nuisance-level” flooding events, defined as water one or two feet higher than local high-tide level. (The name is deceptive — it’s expensive to clean up and repair after such events, especially if they reach vulnerable infrastructure.) Two important insights emerged.

First, the frequency of nuisance-level flooding is rising faster than average sea level, and on a non-linear trajectory. Such floods are already five to 10 times more common than they were 50 years ago. Long before the sea rises far enough to literally swamp coastal towns and cities, it will rise enough to bedevil them with frequent floods.

Second, lots of American cities and towns are on the verge of serious trouble. The researchers identified 30 or more days of nuisance-level flooding a year as a “tipping point,” the level at which flooding goes from burdensome to overwhelming. The tipping point has already passed in some places and it’s rapidly approaching in others.

This may not be an issue in the 2016 election, but it surely will be in the presidential election that follows it. “The year 2020” is just five years from now. And by then places like Charleston and Baltimore and Atlantic City will already be dealing with more than a month of flooding every year.

The future is here. Better start swimming or sink like a stone.

December 22, 2014
Charlatans in leisure suits saw dollars dancing in their heads
Next Post