A spray can scrawl on the cemetery wall

A spray can scrawl on the cemetery wall January 7, 2015 Fred Clark

• As with Mark Driscoll, Ben Carson’s plagiarism problem isn’t just that he seems to have stolen other authors’ words, but that he chose to steal from such shoddy material.

Cleon Skousen’s Five Thousand Year Leap? Really? That’s like plagiarizing Lyndon LaRouche. The choice of material to plagiarize is far worse than the act of plagiarism itself.

• “My guess is that the single most important important factor in the new growth of the Nones has been the establishment of ‘Nones’ as an available demographic category.”

• I’m no Nate Silver, but I predict that this candidate won’t be elected as the next mayor of Colorado Springs.

• “The Church becomes very feminized,” complains recently demoted abuse-apologist Cardinal Burke. “The activities in the parish and even the liturgy have been influenced by women and have become so feminine in many places that men do not want to get involved.”

That’s from this guy: 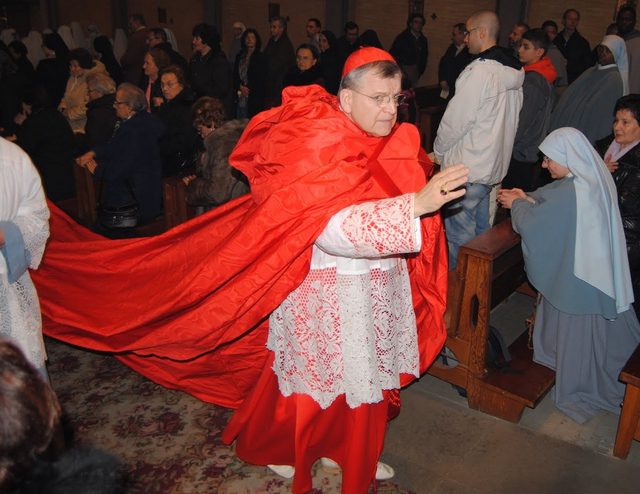 • “Miami archbishop warns employees against supporting gay marriage, even in a tweet.” That’s a challenge, isn’t it? An invitation, practically.

I mean, Thomas Wenski is saying that if anyone he has power over tweets something favorable about marriage equality, he will punish them for it. Doesn’t that mean that everyone over whom Thomas Wenski does not have power is obliged to flood @CatholicMiami with tweets celebrating marriage equality in Florida?

• Speaking of anti-gay sanctimony, the Internet is having a good laugh at a bizarre pamphlet distributed by an anti-gay “Christian” group in Ireland that asks, “Should Children Be Exposed to the Sounds of Sodomy?”

Here’s the next best thing to the Sounds of Sodomy, the sounds of Rum Sodomy & the Lash — the Pogues’ 1985 masterpiece.

January 7, 2015
Please forgive me for the actions of extremists I have never met who commit acts of violence that I have never advocated
Next Post

We've made God in our image, and we're...
Ever since Inauguration Day, Evangelical Christians have been declaring on social media...

Postmodernism Wasn’t the Problem
Some conservative evangelicals and other voices are trying to blame the last...
view all Progressive Christian blogs
What Are Your Thoughts?leave a comment
Copyright 2008-2020, Patheos. All rights reserved.