Please forgive me for the actions of extremists I have never met who commit acts of violence that I have never advocated January 7, 2015 Fred Clark

NOTE: This is a post from August 2010 that got lost in the transfer over from Typepad. Thanks to Phil Ebersole, I can recover the text and restore it here. I’m happy about that. I’m unhappy that it’s still sadly relevant.

As a white male Baptist, it is my duty today to denounce the violence perpetrated by Patrick Gray Sharp, 29, who yesterday attacked the police headquarters in McKinney, Texas, in a heavily armed but ineffectual assault involving a high-powered rifle, road flares, “gasoline and ammonium nitrate fertilizer.”

So I denounce this attack and state unequivocally that we white male Baptists do not all believe in this kind of violent extremism. I beg you all not to condemn all of us for the actions of this lone member of our community, although of course I will understand if you decide that you must do so and will humbly accept whatever restrictions on our full participation in society that you see fit to impose. That’s only fair.

I further beg your forgiveness for my not denouncing this violent act sooner. Unlike the nearly identical failed attack in Times Square, this attack wasn’t the lead story on our local news and the newspaper I work for somehow didn’t mention it at all. Then today I was outside most of the afternoon cutting the grass and just didn’t hear about the story until now. I plead with you to understand that as soon as I learned of this incident, I rushed to post this denunciation. 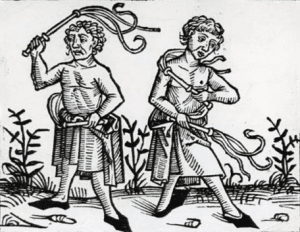 That’s no excuse for the delay, of course, and in no way diminishes my obligation to constantly monitor the behavior of every white male Baptist, denouncing anything that might reflect badly on the WMB community. That is, after all, the foremost duty and purpose of every religious adherent, ethnic group and gender. My failure to promptly condemn Patrick Gray Sharp for specific actions I have previously condemned more generally cannot be excused just because the lawn needed mowing.

I fully appreciate that as a justifiable consequence of yesterday’s extremist violence, it will be decades before any Baptists ought to consider gathering for worship in McKinney, Texas or anywhere else in Collin County. I humbly request that local Baptists be permitted to worship in neighboring Grayson County, but if anyone anywhere feels that is still too close — too much in the shadow of Collin County — then of course I don’t think it would be unreasonable for Baptists during the next few decades to travel across the state line into Oklahoma for Sunday worship. That would be the least we could do to demonstrate our vicarious contrition and our deep respect for the tender sensibilities of the television pundits and ambitious politicians to whom we must all defer as the authorities in these matters.

I hope that this denunciation and expression of substitutionary remorse meets with the approval of all non-white non-male non-Baptists. Should any of you feel that my denunciation is inadequate or insufficient, I would be happy to expand and embellish this initial statement.

Please excuse me now as, like all white male Baptists in the wake of this attack, I must go rend my garments and sprinkle ashes on my head in an extravagant show of remorse.

UPDATE: Boy is my face red. This is so embarrassing — I totally skimmed past the fine print on the unwritten rules and completely missed the exemption for hegemonic classes. It turns out that we white people, males and Protestants never have to worry about extravagant displays of vicarious contrition. As a white male Protestant, apparently, I don’t need to promptly denounce every evil act committed by any and every other white male Protestant.

This is awesome. Do you realize how much time this is going to save me?

Plus just the relief of no longer having to watch the news on pins and needles, worrying every time there’s a crime or a gun-nut on a spree that it’ll be some white male Protestant guy and that everyone is going to assume we’re all like that. What an enormous relief to be judged only as an individual and not prejudged according to the worst thing ever done by anyone ever claiming to belong to my faith community, or sharing my gender or my ethnicity.