• “Surveillance video … does not appear to support the officer’s version of events.” The events in question involve that officer choking a man and throwing him to the ground because he was videotaping the police in public. Videotaping the police is all kinds of legal. Choking people, throwing them to the ground, violating their First Amendment rights and then lying about it isn’t.

• Let’s be very clear, #NotAllCops would attempt to use an underage drinking arrest as a chance to extort nude photos from a college student. This is just the work of one bad apple.

• The allegations here involve an off-duty cop. I’m sure the random belligerence, senseless violence, and racist slurs he allegedly used while off the clock have no reflection on what his behavior might be like in the line of duty. 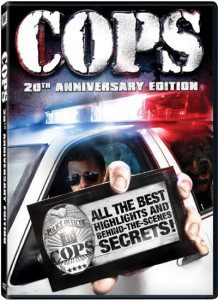 • “The central fact concerning the death of Keith Vidal, 18, does not seem to be in dispute: after the schizophrenic youngster was Tasered and restrained by two officers, a third stepped up, said ‘we don’t have time for this,’ fired into the scrum, then tried to do so again before being restrained. Vidal, who celebrated his birthday last month, was killed by the gunshot.”

• If the men who committed these acts at an Alabama shopping mall had not been police officers, they’d be going to prison for a very long time for assault, false imprisonment, kidnapping, etc. As police officers, they still have no legal right to do any of this, but they won’t ever be punished for it. That pretty much makes them a violent street gang with badges.

• Video shows an unarmed man lying on his stomach, arms extended in surrender. Video shows a Missouri police officer kicking the man in the face. The police explanation is that the video lacks audio, so you can’t hear the officer yelling “Stop resisting! Stop resisting!” And, according to these officers, as long as you yell that, you’re allowed to kick people in the head and to arrest them for not cooperating with their getting kicked in the head.

• The “good” news here is that at least this bad apple got fired: The police department in Victoria, Texas, fired Officer Nathaniel Robinson after video showed him tackling and Tasering a 76-year-old man while trying to arrest him for a missing inspection sticker. (Oh, and it was a dealership car, so it didn’t need an inspection sticker.) It’s good to know that the Victoria PD won’t tolerate officers who allow such behavior to be recorded on public video.

• “Police depositions contain blank spaces to describe a woman’s clothing. Police arrested one woman for pairing a peacoat with jeans that ‘outlined her legs.’ If they can’t find a scantily clad woman, they invent one. Cops arrested one of Modzeleski’s clients on claims she was waving while wearing a low-cut top and miniskirt. But the woman’s attorney found her in a jacket and pants at her arraignment. The case was dismissed after the attorney presented photos, but the cop suffered no consequences for lying.” (in “Special Prostitution Courts and the Myth of ‘Rescuing’ Sex Workers,” by Molly Crabapple)