“The devil is a human dream, a dream of the human, and that’s what makes him frightening,” Matthew Cheney writes at Press Play in the introduction to a fun short video surveying portrayals of the devil in film.

The Bible gives us little more than a name or a title. We supply the rest. We read that name or title and we bring to it a vast panoply of connotations and associations that the writers of the text could never have imagined. We see the word “Satan” and, for us, it means 10,000 things it did not and could not have meant to the biblical writers. Our understanding of that word comes from elsewhere — from movies, TV, novels, poetry, folk tales, folk songs, apocryphal pseudo-Gospels and ideas stolen or borrowed from other religions.

Cheney’s infernal montage captures a key aspect of this cultural creation of the devil in that he doesn’t just include high-brow arty films made with lofty literary ambition. He also includes things like Little Nicky, Bedazzled, the South Park movie, and Vincent Price camping it up in The Story of Mankind.

That matters because Vincent Price is theologically significant. Price wore a devilish goatee that made him look like Satan. How do we know that’s what Satan looks like? We learned it from Vincent Price — and from a thousand other pop-culture and folk-culture figures preceding him. 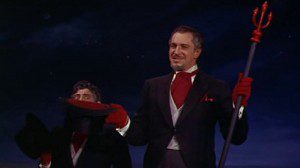 Price carries a pitchfork — a red one, of course. That tells the audience that he’s the devil. What does a pitchfork have to do with the devil? Simple: It’s what we always see him carrying in movies. The pitchfork simultaneously references those folk traditions and reinforces them for future audiences.

Paul Davidson has a terrific discussion of this, “Princes of Darkness: The Devil’s Many Faces in Scripture and Tradition.” He lists five of the “main attributes generally associated” with the devil by Christians today:

Some of those have been elevated to the status of dogma. Others are just Stuff Everybody Just Kinda Knows.

Davidson notes that the Hebrew scriptures don’t support any of those five points, while the New Testament only provides a bit of support for three of them. Those New Testament references, though, don’t so much teach these things as they do refer to such beliefs as ideas widely held. The Bible mentions and sometimes builds on such beliefs, but it does not introduce them — it is not their source.

The source of these beliefs lies outside the Christian and Jewish scriptures. As Davidson summarizes:

The popular Christian image of the Devil finds its roots in numerous ancient, unrelated theological strands. The two most important seem to be the Enochic story of the fallen angels (Watchers) influenced by Genesis and Greek mythology, and the highly dualistic Jewish theology that developed in the second and first centuries BCE under Zoroastrian influence. These ideas eventually coalesced around the figure of the Accuser who appears briefly in three books of the Old Testament. No systematic demonology can be found in the New Testament, but later theologians and writers fleshed out the ideas that are now considered to be a core part of “traditional” Christianity, including Satan’s origin as the angel Lucifer, his prideful rebellion, his banishment from Heaven to Hell, his involvement in the Fall, his authority over demonic forces, his role in mischief and misfortune, and so on.

Thousands of years ago, the idea of the devil was shaped by things like “The Book of the Watchers” and “The Testaments of the Twelve Patriarchs.” It was filtered through Zoroastrianism, through Islam, through Dante and Milton.

And now, today, the idea of the devil is mainly shaped by movies and TV. The character of The Devil has 1,126 appearances in his IMDB filmography. That’s about twice as many as Jesus has — and it doesn’t even include the multitude of stories that mention or discuss demons and devils without including the Prince of Darkness as an onscreen character.

We started making movies about the devil pretty much as soon as we figured out how to make movies. Here’s Georges Méliès in his 1901 or 1902 short The Devil and the Statue — one of at least five times the pioneer filmmaker portrayed the devil in the early years of cinema:

Méliès seems more interested there in inventing new camera effects (check out the disappearing cloak at around 1:13 in that video) than in the actual story — a moralistic little vignette of divine protection against the wiles of the tempter. But this is, nonetheless, a theological document.

That movie — like the 1,126 others listed on IMDB — is a point on a line that begins with 1 Enoch, runs through Dante and Milton and Robert Johnson and Vincent Price, and continues now on the pages of Charismanews, where all of these centuries of stories and folklore are presented and re-presented as dogma and the “biblical truth” about Satan.