When some faction says they, and they alone, are the Real, True Christians, you shouldn’t take their word for it

Graeme Wood’s Atlantic essay, “What ISIS Really Wants” is getting a lot of deserved attention. Wood makes a strong, convincing case that the group’s religious perspective and religious self-concept is the key to understanding its motives — and therefore essential for any strategy to oppose it. It’s a fascinating, insightful, informative article. Go read it. (And then, when you’re done, read Adam Silverman’s supplemental essay at Balloon Juice, which adds to and clarifies Wood’s main point.)

But while Wood is, I think, enormously helpful for understanding the religious nature of ISIS, he’s also misled and misleading when it comes to understanding the religious nature of religion. Wood and Princeton scholar Bernard Haykel, on whom he leans heavily, both seem to be working from a couple of flawed assumptions about religious faith — assumptions that we can visualize in graphic form.

Here’s a diagram of one of these flawed assumptions, a graph I’ve posted a few times before: 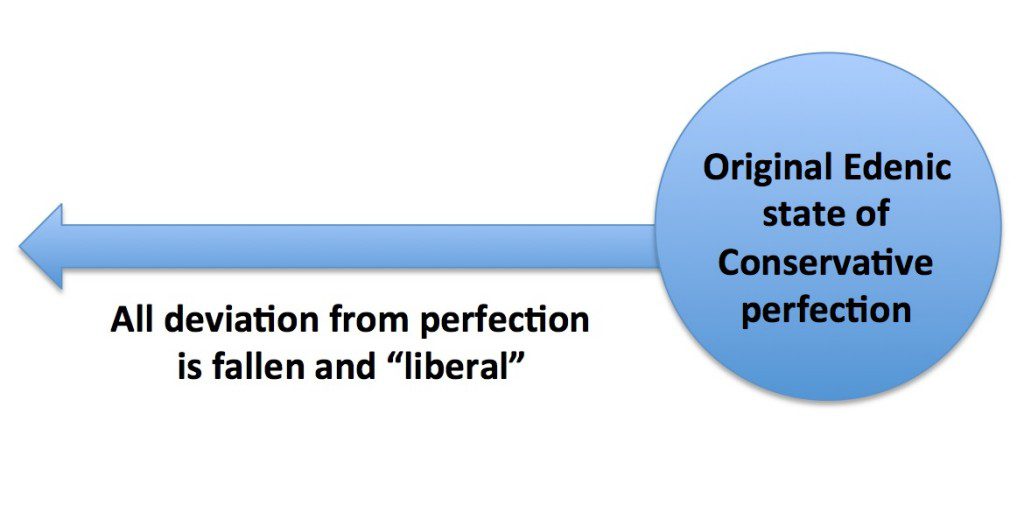 This framework, I’ve written before, is “an efficient machine for manufacturing stupid” and “a retrovirus of the brain that ensures those infected by it will never allow themselves to learn anything, ever.” This is the essence of a great deal of fundamentalist propaganda. It’s not at all surprising that self-proclaimed “conservative” fundies would find it useful to promote this self-serving framework, but it’s always surprising when others uncritically accept it at face value.

This model is the self-aggrandizing mythology undergirding what I sometimes call “Real, True Christianity.” I was forced to adopt that phrase while working my way through the Left Behind novels. Those books are set in a “post-Rapture” world after Jesus semi-returns to snatch away all Christians, taking them back to Heaven in the twinkling of an eye. But Tim LaHaye and his co-author Jerry Jenkins want to be clear that not everyone who claims to be a Christian will be taken away in the Rapture. Nor even will everyone who thinks they’re a Christian. Only the genuine Christians — the Real, True Christians — will be taken.

Thus the Left Behind books, like all “Rapture” talk, become an exercise in separating and distinguishing Real True Christians from all of the inauthentic posers, apostates and backsliders, and from all of those who have been deceived by one of the many “false” strains of Christianity. Separating the wheat from the weeds is a major theme of those books (despite Jesus having said, explicitly, that this is not our job).

The compulsion to elevate oneself as the righteous remnant, and to draw boundaries between Real True Believers and everyone else, is the hallmark of a particular strain of fundamentalist religion. It is a mark of religion that, I think, has replaced the cardinal virtue with the cardinal sin — substituting pride for love. That pride drives the obsessive need to constantly make and enforce distinctions between Us, the righteous few, and Them, the apostate hordes falsely claiming the name of our religion as they trundle down the broad path toward destruction.

Graeme Wood (and Adam Silverman) are particularly insightful in illustrating how this kind of righteous-remnant fundie ideology drives the leaders of ISIS, who regard themselves as holding a near-exclusive claim to being Real, True Muslims. Wood and Silverman both argue, convincingly, that this strain of religious belief has a tendency to implode, to consume itself as it draws ever-tighter boundaries between the righteous and the unrighteous in a legalistic game of musical chairs.

Here’s how Silverman predicts this will play out for ISIS:

When you take this reality of everyone measuring everyone else’s prayer mat to ensure it is the appropriate size, because everyone is an arbiter of what it really means to be Muslim and you combine it with the millenialistic/apocalyptic component, then for all its strength ISIS becomes quite weak. Baghdadi will eventually fail to do something that someone thinks he should do or he will do something someone thinks he should not do. Sooner or later someone will publicly charge him with failing to “promote the good and forbid the evil” and there will be a schism. Woods recounts that this has already happened within ISIS when he covers the break between al Maqdisi and ISIS. ISIS will eventually be at war with itself. When this happens the Sunni Muslims in Iraq, but I would also think in Syria and in other places, will stop being supportive. This is because ISIS will no longer be controlling the chaos, instead it will be part of its creation.

This kind of separatist/exclusivist, prideful fundamentalism will always be schismatic. That’s its nature. That’s true whether we’re talking about Real True Christians or Real True Muslims. Their entire self-concept is driven by the need to confirm their own authenticity by condemning the inauthenticity of others — or, rather, by accusing others of inauthenticity and seeking or inventing new ways to support that accusation. And they can never stop doing that.

This is the defining characteristic of Real True Christians and of Real True Muslims and of “Real True” believers in any other religion or arena — even of Real True Harry Potter Fans. Their particularism matters far more than whatever particulars they may choose to emphasize at any given time. What matters is the pride that they can manufacture by distinguishing themselves from others.

What this means for the rest of us is that we cannot hope to learn anything about the substance, character or meaning of any religion, belief system, or fandom, by looking to those who proclaim themselves the Real True believers. They may be the ones talking the loudest about “authentic” Christianity/Islam/fandom, but they are bound to be the least reliable examples of what such “authentic” belief might entail.

February 20, 2015 The framework of fundamentalist propaganda distorts how we view every religion
Recent Comments
0 | Leave a Comment
Browse Our Archives
Related posts from slacktivist