The narrative of decline cannot abide hope and change

In his recent book, Changing Our Mind, ethicist David Gushee discusses the “narrative of cultural, ecclesial and moral decline” that shapes how many white evangelicals approach … well, everything — from eschatology and evangelism to sexual ethics, politics and politicized faith, and the endless “culture war” in which they view themselves as heroically standing in the breach to oppose the decline they also say is inevitable and divinely ordained.

Here’s Gushee’s summary of this narrative of decline: 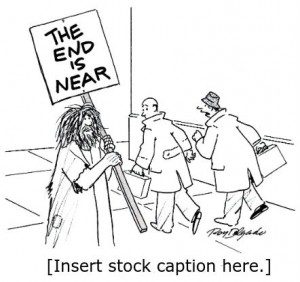 This narrative sees modern western and U.S. history as mainly a sad story of apostasy from an original Christian core. Rarely focusing on historic conflicts and failures in Christian, western or U.S. history, this story instead focuses on, dreams of or ruminates about a time when Christianity held the dominant position in western and American culture, when Christian theology and morality more often prevailed, and when sexual ethics was understood along traditionalist Christian lines — heterosexual, marital, faithful, permanent, etc. The role of the faithful Christian church is to stand against cultural decline, or at least against the encroachment of such decline into the Church itself.

Every day in every way, this narrative says, things are going to Hell in a handbasket. The world is getting worse and worse, and it will keep getting worse until Jesus comes back to destroy it all.

The narrative can be summed up in two words: Hope and change. Change, it says, is always bad. And that’s why there’s no hope.

This pessimistic presumption of perpetual decline doesn’t sound much like Good News. It can also be a self-fulfilling prophecy. Progress takes work. If you believe that progress is impossible because decline is inevitable, then you’re unlikely to attempt that work. If you’re convinced ahead of time that all progress is an illusion, then you’ll start to view even positive changes as bad — as somehow further confirmation of the narrative of decline in which you’ve put your faith.

The ascendancy of this narrative of decline has theological roots. It’s fed by pessimistic premillennial eschatology and by even more harshly pessimistic embellishments of Calvinist anthropology. It also has cultural roots as an expression of anxiety in response to the erosion of WASP-y patriarchal hegemony and the senseless sense of loss that comes from seeing privileges for a few turned into rights for everyone.

But lets put off exploring the roots of this narrative of decline for a later time. What I want to talk about here is the way this anti-change narrative of hopelessness influences the way many white evangelicals respond to President Obama. I think it’s probably the second-biggest reason that they choose to find him offensive even when they can’t find any substantive pretext for taking offense.

In President Obama’s speech Saturday in Selma, he addressed this narrative of decline directly, employing a theologically loaded term for it: despair.

Selma teaches us, as well, that action requires that we shed our cynicism. For when it comes to the pursuit of justice, we can afford neither complacency nor despair.

Just this week, I was asked whether I thought the Department of Justice’s Ferguson report shows that, with respect to race, little has changed in this country. And I understood the question; the report’s narrative was sadly familiar. It evoked the kind of abuse and disregard for citizens that spawned the Civil Rights Movement. But I rejected the notion that nothing’s changed. What happened in Ferguson may not be unique, but it’s no longer endemic. It’s no longer sanctioned by law or by custom. And before the Civil Rights Movement, it most surely was.

We do a disservice to the cause of justice by intimating that bias and discrimination are immutable, that racial division is inherent to America. If you think nothing’s changed in the past 50 years, ask somebody who lived through the Selma or Chicago or Los Angeles of the 1950s. Ask the female CEO who once might have been assigned to the secretarial pool if nothing’s changed. Ask your gay friend if it’s easier to be out and proud in America now than it was thirty years ago. To deny this progress, this hard-won progress -– our progress –- would be to rob us of our own agency, our own capacity, our responsibility to do what we can to make America better.

Of course, a more common mistake is to suggest that Ferguson is an isolated incident; that racism is banished; that the work that drew men and women to Selma is now complete, and that whatever racial tensions remain are a consequence of those seeking to play the “race card” for their own purposes. We don’t need the Ferguson report to know that’s not true. We just need to open our eyes, and our ears, and our hearts to know that this nation’s racial history still casts its long shadow upon us.

Ezra Klein describes those last two paragraphs from the president’s speech as “a precise distillation of Obama’s view of America, and the role politics must play in it”:

The first paragraph is Obama’s case for hope: America is improving; it has always been improving, and to deny that improvement is to steal from Americans a belief in their country that they have more than earned. “To deny this progress — our progress — would be to rob us of our own agency,” he said.

The second paragraph is Obama’s case for change: America’s sins are not vanquished; its hatreds remain real; its racism still breathes. “We know the march is not yet over,” Obama said, “the race is not yet won, and that reaching that blessed destination where we are judged by the content of our character requires admitting as much.”

Set aside any particulars of Obama’s agenda or any concerns about partisan politics. This isn’t about party, but about possibility. Is positive change possible?

I think Klein overstates the case when he says America “has always been improving.” Progress isn’t steady or linear. And it sure as Hell isn’t inevitable. But it is possible. And unless we acknowledge that much, then all the other things we need to discuss — What does progress mean? What does it look like? What does it require? — are irrelevant.

So let’s drive a stake through the heart of the hopeless narrative of decline. Despair is a sin. Hope is virtue and a duty. Positive change is possible. Accepting the possibility of progress is, itself, a form of progress.