Phil Robertson, who plays the grandpappy on the scripted “reality” TV show Duck Dynasty, supplements his TV and duck-call-sales income by moonlighting as a right-wing pseudo-Christian culture warrior. 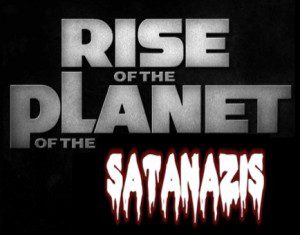 Culture warriors like Robertson bear false witness against their neighbors because it allows them to indulge in a prideful fantasy of moral superiority. The point is not “Liberals are evil,” but rather, “We are better than them.” By clumsily jumping right to Hitler, Stalin, Satan and the Satanazis, Robertson reveals a terrified insecurity. He seems to think only the most extreme examples of superlative evil will suffice to make him feel superior by comparison.

Last Friday, Phil Robertson addressed a “prayer breakfast” in Vero Beach, Florida,* where he repeated his usual Satanazis shtick and then attempted to go even further with a long, grotesque fantasy in which he attempted to argue that atheists are depraved monsters by telling a story in which he delights in the prospect of monstrous depravity being done to atheists.

It’s weirdly incoherent. Robertson is apparently trying to show that atheists are evil, so you’d think he’d tell a story that shows atheists being evil. But instead he tells a story in which he gleefully approves of horrific evils being done against atheists. That makes somebody look like a deranged sicko, but not the somebody Robertson seems to think.

Phil Robertson clearly relishes the evil performed in this story, cherishing every R-rated detail. Don’t let the kids read this, please — it may have been his “prayer breakfast” sermon, but it is not suitable for children. It’s like Robertson’s version of the old “Aristocrats!” joke,** except he changes the punchline to “The Atheists!”:

“I’ll make a bet with you,” Robertson said. “Two guys break into an atheist’s home. He has a little atheist wife and two little atheist daughters. Two guys break into his home and tie him up in a chair and gag him. And then they take his two daughters in front of him and rape both of them and then shoot them and they take his wife and then decapitate her head off in front of him. And then they can look at him and say, ‘Isn’t it great that I don’t have to worry about being judged? Isn’t it great that there’s nothing wrong with this? There’s no right or wrong, now is it dude?’”

Robertson kept going: “Then you take a sharp knife and take his manhood and hold it in front of him and say, ‘Wouldn’t it be something if this was something wrong with this? But you’re the one who says there is no God, there’s no right, there’s no wrong, so we’re just having fun. We’re sick in the head, have a nice day.’”

“If it happened to them,” Robertson continued, “they probably would say, ‘something about this just ain’t right.’”

And then the atheist with the decapitated wife, the two dead daughters, and the bleeding crotch turns to the two guys and says, “So, tell me … what do you call your act?”

Phil Robertson is talking about atheists, but he’s telling us about himself. He is only able to describe their unbelief in the terms of his own beliefs, and what he reveals about those beliefs is appalling.

And just as disturbing, note what it is about God that Robertson says restrains him. He does not say it is due to God’s love for him, God’s love for all people, or the love that God gives him for those other people. Love isn’t part of the equation at all.

Robertson’s only concept of ethics is precisely the same as that of the grandmother in Flannery O’Connor’s “A Good Man Is Hard to Find“:

“She would of been a good woman,” The Misfit said, “if it had been somebody there to shoot her every minute of her life.”

The reassuring news here, such as it is, is that Robertson believes there is “somebody there to shoot him every minute of his life.” He believes that God is that somebody. This is a monstrous theology — making God out to be a cosmic version of O’Connor’s remorseless Misfit — but at least it has the happy side effect of, for the time being, helping to restrain Phil Robertson from acting out his fantasies in real life.

But Robertson’s “God” is not the God revealed in Jesus Christ. This is not the God of the Gospels who so loved the world, nor the God that 1 John describes:

Beloved, let us love one another, because love is from God; everyone who loves is born of God and knows God. Whoever does not love does not know God, for God is love. …

God is love, and those who abide in love abide in God, and God abides in them.

* “Prayer breakfasts” should be presumed guilty unless proven innocent. Doubly so if the gathering is a “Men’s Prayer Breakfast.”

To understand the roots of the Vero Beach Prayer Breakfast, you should read Jeff Sharlet’s The Family: The Secret Fundamentalism at the Heart of American Power. This event is part of that movement, and it’s past speakers include Jerry Falwell and Kirk Cameron.

The folks who organize and attend the Vero Beach Prayer Breakfast, in other words, are the spiritual and actual heirs of the good white Christians of Vero Beach whose Jim Crow piety forced Branch Rickey and Walter O’Malley to build Dodgertown as an outpost of integration with its own barracks and dining hall. Those good white Christians, you see, wouldn’t have allowed Jackie Robinson or Roy Campanella, or even Sandy Koufax, to enter the same hotels and restaurants as the rest of the team.

** Here’s the first part of the hilariously wicked documentary The Aristocrats. Please note that this link is not even remotely safe for work. It’s not really safe for home, either. It’s inappropriate for all audiences, everywhere. And this rendition from Gilbert Gottfried is even worse.

March 25, 2015
Fingers that are picking turn to dust
Next Post