In the last post we discussed Duck Dynasty star Phil Robertson’s prayer-breakfast sermon as a more disturbing variation of the old Aristocrats joke. That comparison seems necessary because Robertson starts his story like he’s beginning to tell a joke: “Two guys break into an atheist’s home …”

Ooh, I think, and lean forward a little in anticipation. This is how jokes begin, and Robertson has the same cheerfully expectant tone that people have when they begin a good joke.

I want to hear this joke. I’m a little concerned with the initial set-up — it really ought to be three guys, after all. Or, better yet, a Catholic priest, a Baptist minister, and a Jewish rabbi. But, still, I’m eager to hear the rest. I’ve never heard this one before. I hope it’s good.

Robertson continues the set-up, fumbling a bit, but it still sounds, formally, like the traditional structure of a joke proper:

And then things take a really ugly turn as Robertson continues:

Gnyaaah! This is not a joke. I have no idea what it is that Robertson is telling us — or why he creepily switches to the second-person “then you take a sharp knife …” — but it’s definitely not a joke.

But then, in a whiplash-inducing twist, Robertson reverts to the structure of a joke — hitting us with a punchline, a little flourish, and a rimshot to cue our laughter:

If it happened to them … they probably would say, “something about this just ain’t right.”

Those stoopid atheists don’t believe in my God who tells me what’s right and wrong, but I bet if somebody did them wrong, they’d know it! If two guys broke into their house and you tied them up, and then we raped and murdered their families, and then I cut off their penises, then I’d bet they’d admit that what those two guys were doing was wrong!

Again, as I said above, gnyaaah.

The best we can hope for Mr. Robertson here is that his staggering ignorance applies equally to himself.

I mean, it seems apparent that Robertson doesn’t have any close friends who do not share his particular sectarian ideology, but surely he must be, on some level, aware that such people exist. And he must recognize, on some level, that the overwhelming majority of those other people — atheists, Jews, Mormons, mainline Protestants, Muslims, Buddhists, Hindus, Pagans, Rastafari, etc. — do not seem to be going around breaking into strangers’ homes, raping and murdering and cutting off penises. 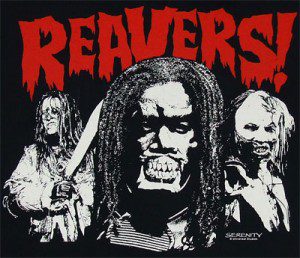 I’m sure that Robertson has heard of Richard Dawkins, for example. And he probably thinks Dawkins is evil and damned and rude. But, as a simple matter of fact, he must also know that Dawkins and Sam Harris have not been going around breaking into houses, torturing, dismembering and decapitating people all willy nilly because atheism.

Robertson’s horrifying nightmare of a “joke” seems to be based on his confused partial perception of a common, bogus argument peddled by many of the pop-“apologetics” acts touring the right-wing Christian circuit. These self-proclaimed Christian apologists like to argue that Christianity (i.e., their own particular sectarian strain thereof) is the only sustainable basis for morality. Only faith — and only their faith — can teach us the difference between right and wrong. Thus, they say, we cannot be “good without God.”

And, therefore, there can never be any such thing as a good Samaritan. Q.E.D.

But even the clumsiest of these Francis Schaeffer wanna-bes — even the ones operating at a Josh McDowell-level of smuggery and self-righteous intoxication — don’t try to take this as far as Robertson does. They’ll at least acknowledge the existence of other approaches to morality, if only to avoid the dilemma Robertson creates for himself of having to explain why the world doesn’t look like a chaotic cesspool of perpetual Mad Maxian violence and depravity. They may present those other approaches to morality as cartoonish strawmen in order to make their preferred Revealed Rulebook approach seem superior, but they don’t pretend, as Robertson does, that everyone who isn’t a white evangelical is running around saying there’s no difference between right and wrong.

Robertson is also, I think, confused about the meaning of the Calvinist doctrine of “total depravity.” This is a popular confusion that I hate encountering because it puts me in the position of having to defend Calvin. The idea of “total depravity” (which comes from Augustine as much as Calvin) really would be better described as pervasive depravity. The idea isn’t that we are totally depraved and superlatively evil in every possible way, but rather that sin affects us totally — affects every part of us, every aspect of our humanity. At the same time, both Calvin and Augustine insisted, we are also totally bearers of the imago Dei, meaning that no part or aspect of our humanity does not also reflect the spark of the divine.

Total depravity doesn’t mean what Robertson seems to imagine it means — that without salvation we are inhuman reavers, conscienceless, bestial creatures of the sort described slaughtering the atheist family in his “joke.” That idea of human nature is not just a confused distortion of Calvinism, it’s also empirically false. There are more than 5 billion non-Christians here on planet Earth, and they do not, in actual fact, act like reavers.

This is why I hope that Robertson’s vast ignorance encompasses himself as well. Because Robertson isn’t just saying that his atheist neighbors are all sub-human reavers, he’s also saying that he would be a reaver himself if he hadn’t gotten “saved” at the right kind of church. His statement about those atheist neighbors is demonstrably ignorant. Let’s hope he’s equally ignorant about himself and that he doesn’t have any actual knowledge that what he’s accusing himself of might be true.

Because if what Robertson says about himself is true, then we should all double-check the locks on our windows, just in case he ever has a crisis of faith.

March 26, 2015
Duck Dynasty's loveless ethics and ... the Aristocrats!
Next Post

March 27, 2015 Left Behind Classic Fridays, No. 26: 'Go to Hell'
Recent Comments
0 | Leave a Comment
"Wife saw a facebook meme suggesting that God had indeed planned to end the world ..."
Ross Oops
"Scientists of 2022, in fiction: And that is how we put a man on EuropaScientists ..."
Ross Oops
"U-Pb is common for very old rocks. Bertram Boltwood introduced it, and of course Clair ..."
Marja Erwin Oops
"Maybe Poul Anderson's *Tau Zero*? It's on my expanding to-read list. And Larry Niven's *Known ..."
Marja Erwin Oops
Browse Our Archives
Related posts from slacktivist