Ireland: ‘We are a generous, compassionate, bold and joyful people who say yes’

The official result for the marriage equality referendum was declared at Dublin Castle shortly before 7pm this evening, with the final tally ending up 62.1 percent Yes against 37.9 percent No. 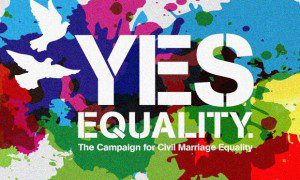 Large crowds have gathered at Dublin Castle to celebrate the resounding Yes.

Speaking after the official result was announced, Taoiseach Enda Kenny said Ireland had made history today. “Our people have truly answered Ireland’s call… we have made history.”

Adding: “Those who voted no did so due to genuine held views which should be respected.”

Meanwhile, Archbishop of Dublin Diarmuid Martin called the Yes result a “reality check” for the Catholic Church in Ireland.

Well, yeah. Perhaps not, Fr. Martin. Good of you to notice.

This wasn’t just some urban elite vote, either — the results were the same throughout the country.

Ireland has voted by a huge majority to legalise same-sex marriage, becoming the first country in the world to do so by popular vote in a move hailed as a social revolution and welcomed around the world.

Some 62 percent of the Irish Republic’s electorate voted in favour of gay marriage. The result means that a republic once dominated by the Catholic church ignored the instructions of its cardinals and bishops. The huge Yes vote marks another milestone in Ireland’s journey towards a more liberal, secular society.

Out of an electorate of more than 3 million, 1,201,607 backed gay marriage, while 734,300 voters said No. The result prompted a massive street party around the gay district of central Dublin close to the national count centre.

Directly addressing Ireland’s gay community, taoiseach Enda Kenny said the result meant that “a majority of people in this republic have stood up for them [those in the gay community]”. He said: “In the privacy of the ballot box, the people made a public statement. With today’s vote we have disclosed who we are. We are a generous, compassionate, bold and joyful people who say yes to inclusion, yes to generosity, yes to love, yes to gay marriage.”

And quoting the late American politician and LGBT rights activist Harvey Milk, she said: “Hope will never be silent.”

That’s why those trying to make a big deal out of the fact that the Irish Republic voted to amend its constitution somehow differs from what’s happening here in America, where the courts are finding that marriage equality for same-sex couples is already constitutional. America legalized same-sex marriage by popular vote in the 1860s — it just took our courts more than a century to acknowledge that fact.

Or, as Rachel Maddow put it, “Here’s the thing about rights. They’re not actually supposed to be voted on. That’s why they’re called rights.”