John Perry is an impressively prolific writer. I can’t say that any of his books seem like anything I’d want to read, but I do have to admire the sheer volume of his literary output.

Well, “literary” may not be quite the right word to describe Perry’s body of work. He’s more of a hired gun — the ghostwriter or, more euphemistically, “co-author” of soft-focus political and “inspirational” memoirs, pop-histories, and slender, hagiographic biographies. 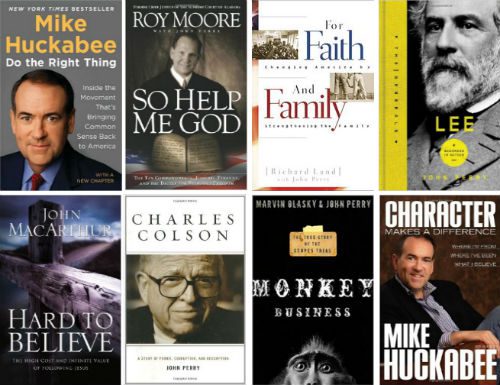 Many of Perry’s prominent clients — the non-writers he writes “with,” or for, or as — come from the Southern Gothic Fundie fringes of the religious right. He’s written for/with/as Alabama theocrat Roy Moore, Southern Baptist race-hustler and plagiarist Richard Land, and Randian/Calvinist crackpot Marvin Olasky of World magazine. All of whom were, unsurprisingly, very happy to work with a writer whose fan-boy biography of Gen. Robert E. Lee was subtitled both “A Life of Virtue” and “Goodness in Action.”

For white fundamentalists like Moore, Land and Olasky, “virtue” and “goodness” are synonymous with treason in defense of slavery, rape, torture, and trafficking in children. “Christian heritage” and all that.

John Perry has also written two books for former Fox News host and former Arkansas Gov. Mike Huckabee, one titled Character Makes a Difference and the other Do the Right Thing: Inside the Movement That’s Bringing Common Sense Back to America. Both are campaign books, written with an eye to establishing and reinforcing Huckabee’s political brand as an avuncular moral scold who’s condescending and sanctimonious … but in a charming, folksy way.

Huckabee is currently stumbling in his second attempt to win the Republican nomination for president. In a very crowded field of candidates with mostly indistinguishable policy ideas, Huckabee so far stands out mainly for being the only candidate to defend the Duggars and their attempts to cover-up and excuse the sexual abuse eventually confessed by their oldest son. Huckabee has long supported the reality-TV-famous family, and vice versa, as John Seavey puts it: Huckabee “has hitched his wagon pretty hard to the creepy cult/family, holding them up as a shining example of American family values to contrast with the neglectful, even abusive decision on the part of the Obamas to let their kids listen to Beyonce.”

Seavey was sure that this link — compounded by Huckabee’s doubling-down on his defense of the family and their defiant non-response to Josh Duggar’s creepy criminality — would doom Huckabee’s presidential aspirations. “As political strategies go,” Seavey writes, “standing in solidarity with the child molester and the people who helped cover up his crimes” should mean that “Huckabee is never going to be taken seriously as a politician in this country ever again. He might not even be able to get his Fox News job back.”

That seems reasonable. It seems like it ought to be true. But I don’t think it is. Mike Huckabee’s viability as a conservative politician and Fox News host (I repeat myself) is based on his appeal to a considerable niche of the Southern white Christian voting bloc. As long as that niche continues to support him, he will continue “to be taken seriously as a politician.” And the Southern white Christians of that niche are, apparently, pleased that Huckabee is “standing in solidarity with the child molester and the people who helped cover up his crimes.”

If anything, the Duggar scandal has reinforced their support for Huckabee in that it reinforces his/their self-aggrandizing narrative of “persecution” from the nasty liberal media conspiracy.

Spinning Josh Duggar’s confessed crimes into evidence of this “persecution” — and thereby further evidence of his and their own Christian virtue — was quite a trick. Now we’ll have to see if Mike Huckabee can perform that same trick a second time.

A 2012 police investigation of Perry’s alleged offenses found that “the allegations of sexual battery were sustained” but that the statute of limitations had expired.

… Another filing, submitted by Perry’s ex-wife’s attorney earlier in the same proceedings, refers to Perry’s “admitted sexual abuse” of a minor child. Perry’s response to that filing — also submitted prior to his ex-wife’s affidavit — does not deny the abuse, or that Perry admitted it.

… a police investigation launched in 2012 found the allegations against Perry “were sustained,” according to a police department spokesperson, but that statute of limitations had passed.

“The alleged sexual battery was reported to have occurred when the victim was between the ages of 11 and 14,” said Nashville police department spokesperson Don Aaron in a statement to BuzzFeed News.

“As a result of the investigation, the allegations of sexual battery were sustained, but it was determined that the statute of limitations had tolled, barring prosecution. The victim was age 18 when she first disclosed the allegations to non-law enforcement and said at that time she did not want the matter reported to the Tennessee Department of Children’s Services or the police.”

The same “alleged sexual battery” of a young victim apparently also forced Perry to resign as a deacon at his PCA (conservative uber-Calvinist Presbyterian) church, from which he was later excommunicated because he “confessed to committing heinous and repetitive sin […] and has not shown evidence of repentance.”

You won’t find any “evidence of repentance” in the statement John Perry offered in response to Buzzfeed News’ report, either. His non-denial denial states only that “the person behind it has been pursuing a vendetta against his former church for years and this story is one of the means he has used.”

(For a very detailed background on this alleged “vendetta” and that church’s attempts to gaslight dissenters against an apparent cover-up of Perry’s abuse, see this 2014 post by Wayne Burleson.)

Perry, apparently, is hoping to pull off the same trick the Duggars have used — characterizing reports of his own criminal deeds as an attack on the church and a form of anti-Christian persecution.

How will that go over with the right-wing white Christians who support Mike Huckabee, Roy Moore, Richard Land, Marvin Olasky and Robert E. Lee? It just might work. Perry’s offering them a double-shot of the intoxicating narrative of self-righteous indignation over imaginary persecution. And as we’ve already seen countless times, when they’re drunk on that stuff, these folks will swallow anything.