It has been “An Embarrassing Week for Christians Sharing Fake News,” Ed Stetzer writes for Christianity Today.* By “Christians,” Stetzer means the CT audience, which is to say white evangelicals. White evangelicals, he says, seem particularly susceptible to believing and spreading fake news stories because they are “gullible”:

So, here is the deal.

We are too gullible. …

You just make us all look gullible when you don’t do simple steps like that. …

Be less gullible next time.

That’s the gist of Stetzer’s entire post, which makes a commendable case against credulous gullibility and offers some practical advice for how to be more skeptical when evaluating outrageous-seeming news stories online.

All well and good. But all, also, utterly beside the point. Gullibility is not the problem.

It would be nice if it was. Gullibility, after all, is a kind of innocence — an honest mistake. And it’s easy for anyone to make such an honest mistake, gullibly getting tricked by a fake news story, a subtle parody or a well-crafted poe and then passing it along to others while genuinely believing it to be true.

That happens, too, to just about everyone at some point. And when that happens, the advice Stetzer provides applies:

You fell for a hoax. Say it and move on.

You were deceived. It’s OK to admit that. You don’t have to try to cover your tracks and make some sort of lame excuse to make yourself look better.

Have some humility, be willing to admit someone fooled you, and move on.

But even such simple cases of apparent gullibility are rarely wholly innocent. They tend to be “Some Guy” stories — Some Guy from the Other Tribe did a foolish/hateful thing. It takes a bit of effort to double-check such stories to confirm that they are true, and we may not be inclined to make that effort because we’re already predisposed to believe such things about people from the Other Tribe. We can call that being “gullible,” but note that this gullibility includes at least an element of both laziness and prejudice — and neither laziness nor prejudice can be defended as wholly innocent or an honest mistake. 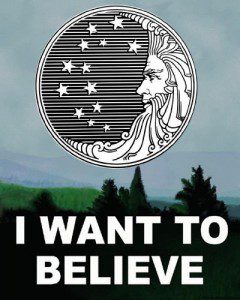 But the stories Stetzer describes in his post are not even this kind of semi-innocent mistakes. These are Scary Stories, and simple ignorance or laziness are never an excuse for passing along Scary Stories. It I tell you that Some Guy said something foolish, and then it turns out that he never actually said such a thing, I can plausibly claim that I “fell for a hoax” or that I was “deceived.” But if I tell you that a zombie horde is shambling toward our town when, in fact, no such army of the undead exists, then I cannot defend my passing along this false claim by saying I was innocently deceived and mistaken.

Why not? Because the urgency of the alleged threat is such that it would not be possible for me to genuinely believe it to be true without also stopping at nothing to prove it such to myself and to others. It’s conceivable that I was just too lazy to confirm what Some Guy said before passing along that fake story, but if I really believe that the Scary Story is true, then I should really be scared, and that fear should have roused me from the apathy, laziness and ignorance that might keep me from bothering to confirm some less-consequential bit of dubious gossip about Some Guy.

Anyone who genuinely believes a Scary Story to be true will be compelled to confirm it and to reconfirm it with a desperate urgency borne of that genuine belief.

This is why Ed Stetzer’s post about the “embarrassing” gullibility of credulous, naive Christians getting duped by “fake news” ultimately feeds into and reinforces the very problems he’s reacting against. By misidentifying the problem as one of innocence and honest mistakes, he fuels the self-righteous fantasizing that drives this phenomenon.

The fake stories Stetzer describes are not being spread in good faith by innocent dupes. They are not innocent and they are not dupes. And the stories are not merely “fake,” but false. The biblical term for what he’s describing is “bearing false witness against your neighbor.”

An innocent dupe — or even a partly innocent dupe — spreading a fake story in good faith isn’t deliberately lying. They’re stating untruth, but only because they have been deceived, not because they are attempting to deceive others. But those who are bearing false witness against their neighbors have not been, themselves, deceived. They are, rather, choosing to pretend that they have been deceived in order that they can, in turn, invite others to choose to pretend the same thing.

Consider Stetzer’s first example — the clumsy bogus story about a pastor supposedly being arrested for refusing to conduct a same-sex wedding ceremony. Pretending to believe such a story can, for a while at least, feel good. It lets you indulge in that emotional kick that comes from imagining yourself to be one of the righteous who is being persecuted for righteousness’ sake. It’s not a lie so much as a form of play — not all that different from fantasy role-playing games or from children in the yard delighting themselves by tying a beach towel around their neck and pretending to be Superman.

The spreading of such stories isn’t so much an attempt to get others to fall for the hoax as it is an invitation to join the game. “Come play with us” — come participate in our fantasy game of make-pretend.

The real problems arise when enough people have been recruited into the game that their collective participation in the pretense makes it begin to seem real to them — when the children with their beach-towel capes start jumping off the roof because they’ve convinced themselves they can really fly.

C.S. Lewis discusses all of this in his book Mere Christianity — a favorite book revered by Stetzer’s white evangelical audience of Christianity Today subscribers. Here, again, is what Lewis has to say about the “Christian” habit of spreading fake news that Stetzer tries to address:

The real test is this. Suppose one reads a story of filthy atrocities in the paper. Then suppose that something turns up suggesting that the story might not be quite true, or not quite so bad as it was made out. Is one’s first feeling, “Thank God, even they aren’t quite so bad as that,” or is it a feeling of disappointment, and even a determination to cling to the first story for the sheer pleasure of thinking your enemies are as bad as possible? If it is the second then it is, I am afraid, the first step in a process which, if followed to the end, will make us into devils. You see, one is beginning to wish that black was a little blacker. If we give that wish its head, later on we shall wish to see grey as black, and then to see white itself as black. Finally we shall insist on seeing everything — God and our friends and ourselves included — as bad, and not be able to stop doing it: we shall be fixed for ever in a universe of pure hatred.

Notice that Lewis never uses the word “gullible.” Unlike Stetzer, he recognizes that gullibility has nothing to do with it.

Lewis recognizes that the problem isn’t simply the “embarrassment” of credulous Christians naively accepting fake stories about their neighbors or their enemies. He’s seen that happen sometimes, and finds it disappointing, but it’s not the thing that really disturbs him or the thing that he condemns in his harshest language.

Far more upsetting than any supposed gullibility is the reaction of these Christians to being confronted with the evidence that their fake-news Scary Story is, indeed, fake. They’re disappointed. They’re defensive. They’re angry.

And that, as Lewis says, is all you need to know. That is all the proof you could ever require that we are not dealing here with gullibility or innocence or even ignorance. We are dealing with self-righteous fantasizing, and with malice.

Someone who is gullibly frightened by a fake Scary Story will be relieved and pleased and grateful to learn that the purported threat is not real, that the monster is not under the bed, the barbarians are not at the gate and the sky is not falling. When we do not see such relief, joy and gratitude on learning the truth, then we can see — we can know — that we are dealing with something other than gullibility.

* A publication that believes gay and lesbian couples are “destructive to society.”

July 14, 2015
Everywhere is somewhere and nowhere is near
Next Post