You can learn a lot on the Internet. Today, for example, I learned that Pepsi cola is made with “flavor enhancers” manufactured from the kidney cells of aborted fetuses.

I learned this thanks to a real, true Christian commenting on a Religion News Service report on the latest “undercover” exposé of the Satanic baby-killers of Planned Parenthood — a video edited to create the impression that those evil, evil SBKs are selling body parts to mad scientists. This real, true Christian commenter has a great deal of disturbing information to share with us about “the abortion industry”:

Fetal tissue is the single most productive purpose in Planned Parenthood, clinics at large, abortion at large. Huge dollar revenue. Food, drugs are ladened with tissue. It is the industries main industry. And I believe if all those contemplating abortion could be told this awful truth, it would halt the abortion ‘industry’. Make no mistake, abortion is a profitable industry. And the result is cannibalism.

Months ago I reported in comments about Pepsi and Nabisco products of which Creamora is one (both these products have been removed from my diet), have been given tissue for the sole purpose of enhancing flavor. I can call this nothing but cannibalism. And that alone is beyond disgust. Remember the movie “Soylent Green’? Charleston Heston. Why in the world has both ‘food and drug’ been combined into one agency? Why?

This Scary Story about Satanic baby-killers making actual Soylent Green is not new. It last bubbled up several years ago as a creatively biotech spin on the much older genre of Scary Stories involving infant-cannibalism (see Mike Warnke, Bob Larson, etc.).  The bogus rumor was widely spread and shared by righteous Christian people on social media, producing enough of a panic to prompt an Oklahoma state senator to introduce legislation banning the non-existent practice. (“No person or entity shall manufacture or knowingly sell food or any other product intended for human consumption which contains aborted human fetuses in the ingredients,” read Sen. Ralph Shortey’s 2012 bill.) 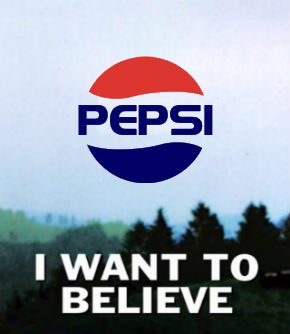 The Scary Story was thoroughly debunked by folks like Snopes.com, and resoundingly mocked into retreat. But such stories never completely go away. They are retained by those who desperately want to believe them.

Again, it may seem odd that this is something that anyone would want to believe. Given a choice between the real world and such a nightmare alternative, most people would prefer to live here in reality, where our popular soft drinks do not involve cannibalism and the refreshing taste of dead babies.

So what is it that makes some people prefer the fantasy nightmare instead?

Well, for one thing, nightmares are exciting. Our mundane, day-to-day existence can sometimes seem boring, what with the drudgery of our 9-to-5 jobs, catching up on laundry, and our drearily cannibal-free selections of sodas. The prospect of a massive evil conspiracy of evil conspirators conspiring to do evil livens things up a bit. People sometimes wish such stories were true for the same reason they sometimes wish that things like vampires and werewolves were real. Nobody actually wishes that such fantastic creatures of the night were really out there, hunting us after sundown … but if they were, wouldn’t that also be sort of thrilling?

These Scary Stories also let us imagine ourselves to be heroes — champions battling evil and slaying dragons. One day you’re just some average nobody sitting there in the break room numbly stirring a bit of non-dairy powdered creamer into your cup of sub-par office coffee. But if you agree to the bargain of pretending the Scary Story is true, then the very next day, in the very same place, you can be a hero — boldly refusing to use the Cremora and thereby striking a blow against the nefarious baby-killing “industry.”

But wait — isn’t focusing on the outrageous credulity of this one Internet commenter just an unfair case of nut-picking? It might be, if the commenter’s eager delusion and desire to believe outlandish Scary Stories were wholly unrelated to the article that prompted her comments. But the article itself is just another version of the same Scary Story — the latest iteration of a false rumor peaking on social media.

The headline for that article — a mainstream Reuters report reprinted by RNS — is just the latest in a long series of very similar headlines: “Planned Parenthood blasted after secret video purports to show [fill in the blank].”

This latest story of this latest video purporting this latest Satanic baby-killer atrocity follows the familiar pattern. The video itself, despite painstaking selective editing, scarcely supports the outrageous claim — only providing “evidence” for those who desire to find it, and who are willing to squint, and twist their necks, and cover one eye to maybe kinda sorta make it seem like it might show something that, if taken a certain way, might be horrifying.

“This is the test,” C.S. Lewis said. How will such people respond when confronted with evidence that this latest Scary Story is not true? Will they be relieved to learn — thank God! — that this nightmare of a black market in dead-baby body parts isn’t a horror they need to fear? Or will they deny all such evidence, growing angry with the spoilsports who point it out and thereby ruin all the fun of believing it was true?

“If it is the second,” Lewis said, “then it is, I am afraid, the first step in a process which, if followed to the end, will make us into devils.”

White evangelical Christianity in America is now three decades along in that process. And it’s gaining momentum.