Open your eyes, boy, we made it through the night

• Our friends at Vox have an explainer for everything. So if you haven’t been keeping up with the Kardashians and want a quick overview to explain who these inexplicably famous people are, check out Alex Abad-Santos’ introduction at “The Kardashians, explained.”

Weirdly, despite some insightful discussion of Caitlyn Jenner and her former life as Bruce Jenner, Abad-Santos never mentions this fact: Jenner won the gold medal for the decathlon at the 1976 Olympic Games in Montreal. That was kind of a big deal at the time and, usually, it’s considered kind of a big deal for all time.

One other area Abad-Santos neglects — perhaps because it’s an almost-invisible part of the celebrity personas they project — is discussed in Josh Cobia’s surprising recent piece for The Washington Post, “I went to church with Bruce Jenner. Here’s what Caitlyn Jenner taught me about Jesus.” Cobia reveals that this famous family is also, very much, a product of the world of Orange County evangelicalism. 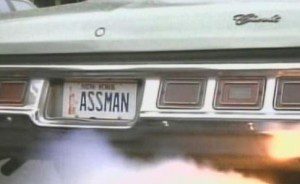 • Abi Sutherland gives us a useful word: Koinopoiesis — “It refers to both the moment when a crowd becomes a community and the processes which create that transformation.”

• Noel Murray of The AV Club discusses “10 episodes of Angel that show how it was more than Buffy redux.”

I think Angel was a thematically necessary spin-off. Buffy was the Slayer — the good hero who fought evil by destroying it. While the show and the storytellers who gave it to us worked hard not to let it become a simplistic tale of Good Heroes slaying Evil Monsters, that idea was baked into its central metaphor. That required a counterpointand a corrective  — a parallel story with a hero who was, himself, a “monster,” and that was less concerned with slaying evil than with redeeming the irredeemable.

• “The Texas Supreme Court Will Soon Decide if Bible Banners at High School Football Games Are Legal.” In Texas, apparently, high school football fans like to cheer on their teams with Bible-verse banners that say things like: “I can do all things through Christ which strengthens me” or “But thanks be to God, which gives us victory through our Lord Jesus Christ.”

As important as it is to have judges weigh in on the First Amendment implications of such banners, I think it may be even more important to perhaps commission a panel of New Testament scholars to explain to these Texas football fans that neither Philippians 4:13 nor 1 Corinthians 15:57 means anything at all like what they’re trying to make those verses mean.

• The hypothesis we are testing, again, is that over the past three decades, white evangelical Christianity has been replaced with a religion of anti-abortionism. This new faith using the old name has as its central, paramount doctrine the belief that women are untrustworthy, irresponsible and morally incapable.

Here is Exhibit B: 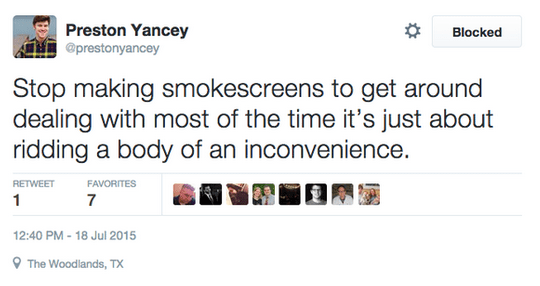 This is exactly the sort of thing our hypothesis predicts — sweeping, dismissive, arrogant statements presuming without evidence that the decisions and choices women make are unwise, unvirtuous, selfish and unworthy, coupled with a complete disinterest and incuriosity in actually exploring anything — data, personal testimony, conversation — that might provide actual information about the actual reasons that women have for the actual decisions they actually make.

For an alternative explanation of this man’s apparent disdain for women and his defiantly ignorant refusal to question his assumptions and generalizations about them, it’s possible that he … um …

Nope. Sorry, I can’t think of any alternative explanation.

(The image/Tweet above links to Sarah Moon’s “Why I Don’t Trust Pro-Life Feminism,” which is where I snurched it from.)

• And let’s call this Exhibit C. (That’s from a WorldNetDaily column, which is different from, say, a Ross Douthat column or a more “mainstream” white evangelical column because at WorldNetDaily they don’t realize they’re not supposed to say the quiet parts loud.)

July 30, 2015 The gospel according to 1 Corinthians 13 (part 2)
Recent Comments
0 | Leave a Comment
"You can't “miss” what you don't care about.If you view a dangerous, high-contact sport as ..."
Delta If the Q fits …
"As disabled activists have pointed out, WFH used to be something employers would squawk at ..."
Delta If the Q fits …
"Yeah, dairy really kills the hot. Whole milk is much better than water for a ..."
Mits If the Q fits …
"I am not particularly looking at Gary Johnson voters. My only point about the Sanders ..."
arcseconds If the Q fits …
Browse Our Archives
get the latest from
slacktivist
Sign up for our newsletter
POPULAR AT PATHEOS Progressive Christian
1