The gospel according to 1 Corinthians 13 (part 1)

J.R. Daniel Kirk and Hemant Mehta are two bloggers I enjoy because they’re both smart, funny, thoughtful and challenging. They’re also coming from two very different perspectives: Kirk is a devout Christian and New Testament scholar, while Hemant is better known as the Friendly Atheist. So when two people I respect make the same point, coming at it from two different angles, I pay attention.

First, here’s Kirk, speaking to us as a theologian. He’s reflecting on this verse from the Sermon on the Mount: “Let your light shine before others, so that they may see your good works and give glory to your Father in heaven.”

[Jesus] put the judgment of our works, as the people of God, into the hands of the outsiders.

It’s we who are to shine, and the people of the world who are to see the light and recognize it as such.

Let me put a finer point on it: If someone has to agree with your theological system in order to agree that what you are doing is “love,” then you are not loving your neighbor as yourself.

People know love when they see it.

That was still bouncing around in my head (along with the bassline from “You Are the Light of the World” in Godspell, which happens to me every time anyone brings up this passage), when I read this, from our friendly neighborhood Friendly Atheist:

She also says a prayer for him, and this is the sort of prayer I could get behind. Not because it improves anyone’s situation, but because it was backed up by real action. She didn’t *just* pray for him. …

If faith inspired everyone to do what she did, it’d be much harder for people like me to argue against it.

This is, essentially, an unsolicited confirmation of Kirk’s point: “If someone has to agree with your theological system in order to agree that what you are doing is ‘love,’ then you are not loving your neighbor as yourself.”

That’s a negative statement of the idea. Hemant’s story flips it around into a positive statement: If you are loving your neighbor as yourself, then no one needs to agree with your theological system in order to agree that what you are doing is “love.” People will see that what you are doing is love even if they very much otherwise disagree with your theological system.

We all know love when we see it. And when we see the genuine article, we’re awed by it, regardless of the “theological system” (or absence of any such system) of those who show such genuine love.

Consider, for example, Dr. Kent Brantly, the American missionary doctor who contracted Ebola while caring for the sick in a hospital in Liberia. Brantly serves through Samaritan’s Purse — the relief and development agency founded by the Billy Graham Evangelistic Association.  I’ve always been somewhat skeptical of the “theological system” behind Samaritan’s Purse — a theology that sees its corporal works of mercy as benevolent, but optional, a secondary tool of value due mainly to its utility to the primary function of proclamation evangelism.

But I became even more skeptical of Samaritan’s Purse after the BGEA chose to use it as a vehicle for the rehabilitation of Billy’s trouble-making oldest son. Installing Franklin Phineas Hophni Graham as the nominal leader of Samaritan’s Purse was supposed to be a way to bring him back into the fold of respectability, but Franklin has spent most of his energy in recent years turning that post into a platform from which he hopes to become a culture-war player. He has used that platform to promote hate, not love — spouting some of the vilest anti-gay, anti-Muslim, anti-feminist, anti-everybody garbage you’ll hear from even the furthest fringes of the religious right.

All of which is to say that I do not and cannot agree with the theological system of Samaritan’s Purse. Yet that has no bearing on how I respond when I witness the genuine loving-of-neighbors-as-oneself demonstrated by Kent Brantly and his missionary colleagues in Liberia.

We know love when we see it.

We should note that the passage Prof. Kirk is discussing in the Sermon on the Mount is from the pericope that immediately follows the Beatitudes. Specifically, it immediately follows the last few Beatitudes — the few verses that American white evangelicals ever cite from the dangerously liberal Sermon on the Mount (well, along with the little riff in the middle about divorce). Those last few Beatitudes are frequently invoked in support of the delusional persecution fantasy nurtured and promoted by the culture warriors of the white Christian right. First come all the Beatitudes that they ignore or spiritualize into ethereal nothingness:

Blessed are those who hunger and thirst for justice, for they will be filled.

None of that is of any value for someone composing a sermon or a direct-mail fundraising letter appealing to the worser demons of our nature. None of that helps to rally the troops for the great war between Us and Them.

But the final few Beatitudes get plenty of use in that cause:

Blessed are those who are persecuted for righteousness’ sake,* for theirs is the kingdom of heaven.

Blessed are you when people revile you and persecute you and utter all kinds of evil against you falsely on my account. Rejoice and be glad, for your reward is great in heaven, for in the same way they persecuted the prophets who were before you.

Ah, there we go. This is useful fodder for the fabrication of a persecution complex. From those last few Beatitudes it’s possible to weave a “worldview” that views the world as hateful and deserving of hate — a faceless, mindless mob of the children of darkness who oppose us as the children of light.

But as Kirk shows, that won’t work here. We can try to twist the next set of verses into an affirmation of this — arguing that if we are to be salt and light it must mean everyone else is, well, rotting meat and darkness, I guess. Yet what Jesus says here about salt and light only makes sense if “the world” — Them, the others — are capable of tasting and seeing the goodness of goodness, the goodness of love.

To paraphrase Eleanor Roosevelt, Jesus isn’t telling us to curse the darkness, but to light candles.

[Jesus] put the judgment of our works, as the people of God, into the hands of the outsiders.

It’s we who are to shine, and the people of the world who are to see the light and recognize it as such.

Let me put a finer point on it: If someone has to agree with your theological system in order to agree that what you are doing is “love,” then you are not loving your neighbor as yourself.

People know love when they see it.

* The indefensible custom in our English translations of the New Testament is to render the Greek word dikaios as “righteousness.” That’s a dubious choice to begin with, but it becomes wholly wrong in American English — in a culture that invests the word “righteousness” with a host of denotations and connotations that are utterly incompatible with the meaning of that word.

Dikaios means justice. The history of why this has been euphemized into “righteousness” in English translations is long and complicated, but it began as a habit back when it was still possible to argue that righteousness and justice, righteous and just, were rough synonyms. That is no longer credibly true. It is no longer credibly true, in part, because of this choice in our English translations.

In American English, righteousness conveys the wrong idea — a whole bunch of wrong ideas. It suggests rectitude, respectability, adherence to prevailing norms and rules, manners and mores. All of that completely distorts the meaning of this word dikaios here in the Beatitudes — rendering them nonsensical.

Think about it — “Blessed are those who hunger and thirst for rectitude and respectability.” What on earth could such a thing possibly mean? No one does that. No one has ever done that and no one should ever do that. (It suggests, to me, the kind of person who seems to have a large broomstick in his tightly clenched rectitude.)

This is why, as a general rule, I substitute the better, more accurate, more sensible and sensical word “justice” for the misleading “righteousness” that litters our English translations. You should too.

I didn’t do that here, though, in quoting Matthew 5:10 — “Blessed are those who are persecuted for righteousness’ sake” — because what I’m trying to show above is the way this verse gets misused and abused by white evangelicals fabricating a self-indulgent fantasy of non-existent “persecution.” They do not imagine they are “persecuted for fighting injustice” (which is how Nicholas Wolterstorff says we should best translate this verse). They imagine, rather, that they are persecuted for “righteousness’ sake” — by which they mean, for the sake of their rectitude and respectability, and for the sake of their upright indignation at others’ lack thereof.

That’s not loving and that’s not love. And people know that absence of love when they see it.

July 28, 2015
Something happened and now I know
Next Post 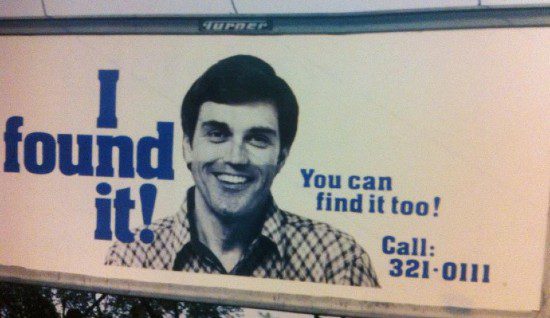 Progressive Christian
'I Found It!'
slacktivist