This is Monday and we’re making pies

• Reading Jonathan Chait’s piece on the resignation of House Speaker John Boehner — “Conservatives Hated Boehner Because He Couldn’t Get Rid of Obama” — makes me think René Girard may be on to something.

Paul Bibeau seems to have a similar idea: “Conservatives’ Next Move Will Be to Burn John Boehner in a Large Wicker Statue.”

• The same people who brought us the iPad are planning the iRing. The iRing is still under development, so I guess that makes it an iUD. Next up: the iSponge?

• Katie Grimes remarks on another aspect of Pope Francis’ invocation of MLK:

This moment is even more remarkable precisely for what seems entirely unremarkable about it. He did something so unremarkable in fact that the vast majority of us probably did not even realize that it happened: the Pope lifted up a Protestant named after Martin Luther as a model of Christian discipleship.

This would not have been possible in another age.

Good point. I’m so accustomed to thinking of Martin Luther King as wholly distinct from his namesake that I almost forget he has one. Remembering that namesake doesn’t just make Pope Francis’ public commendation of MLK surprising — it also makes this photo all the more remarkable: 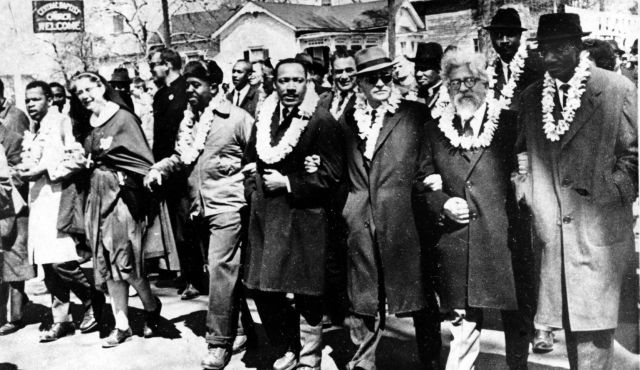 • Amanda Marcotte looks at “The Math on Planned Parenthood’s Alleged Fetal Tissue Profit Scheme.” Granted, seven clinics making a profit of $0 per transaction might not seem like big money, but she doesn’t understand the First Citiwide Change Bank business model.

• Here’s John Fea on Adam Laats on what it is that makes a “fundamentalist” school fundamentalist. Fundamentalist, like “evangelical,” is a term that we can try to define theologically, but such attempts invariably prove unsatisfying because those theological or doctrinal parameters don’t capture all the essential cultural and tribal aspects at work.

• A monument at Oklahoma’s state capital declares the state’s preference for Protestantism and its belief that wives are the property of their husbands. Turns out that’s not constitutional, so the monument has to go. The Oklahoma Republican Party has offered its headquarters as a new home for this granite Nehushtan. Cool. A private graven image on private property is constitutional for all the same reasons that a sectarian public monument on public grounds is not.

October 6, 2015 You ought to quit this scene too
Recent Comments
0 | Leave a Comment
Browse Our Archives
Follow Us!