New e-booklet: ‘Long March of the Koalas (And other creationist adventures)’

I’m trying to combat the ephemeral nature of blogging by putting together some very slightly less ephemeral ebooks. This one’s more of an e-booklet: “Long March of the Koalas (And other creationist adventures).”

It’s now available at Amazon.com for just 99 cents. (Kept the price low by cutting way, way back on cover design.) 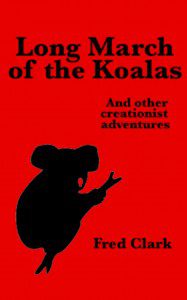 This compiles many of the posts here addressing, assessing, unpacking, or just straight-up mocking, the pernicious ideology of young-Earth creationism. Yet somehow it only comes out to about 84 pages. That’s pretty succinct, considering just listing all the things that are wrong with young-Earth creationism would take thousands of pages more.

I recommend this booklet as an excellent gift for any fundamentalist/creationist friends you may have. It may make them angry, but they’ll be angry with me more than with you, and that’s fine. (Still, though, you’ll have to figure out how to give them this booklet without it being creepily passive-aggressive about it. There are ways that can be done, but there are also ways that shouldn’t be done.)

The essays collected in Long March of the Koalas are very slightly adopted from blog posts here, of course, and all of those posts are still accessible here at the blog, for free, with just a bit of clicking around. If you’d like to save 99 cents and read them all that way, that’s cool. But if you want to read them all and the clicking around bit gets tiresome, then, hey, check it out, only 99 cents.

My sales target for Volume 1 of The Anti-Christ Handbook was 666, because that seemed appropriate. We met that (thank you!), so I’m going to be more ambitious with this one. I’m hoping to sell 6,000 copies — one for each year of the universe’s existence since God created it in six literal days.