Light a little light down here

• Ben Carson wasn’t ever going to carry Vermont anyway, but still, there’s a big difference between losing votes in Vermont and misplacing the entire state.

• There’s a Black Tax on car insurance. Also, “Insurance companies often use credit scores to determine their premiums. This can result in drivers with DWI convictions — but pristine credit — paying less for insurance than drivers with pristine driving records, but poor credit.”

More and more every day, Equifax, Experian and TransUnion are begging for a knock at the door from a torch-and-pitchfork mob. 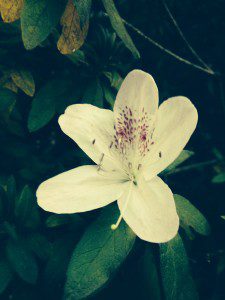 • Azaleas bloom in the spring. One of ours has gotten a bit confused — popping out new flowers here in the middle of November. It’s not blooming blooming, but it now has six lovely flowers on it. On November 18. OK, then.

(And here’s that song, if you’re not familiar with it.)

• I’ve never seen an episode of Hank, nor even heard of this series before. But given the current cost of college and of student debt, and given how much better we’ve gotten at the sit-com format, this seems like a premise that could be revisited and reinvented for a new generation. Lose the laugh-track mentality, change the protagonist to a Dreamer, and I’d watch that.

• Ted Cruz pulls a Romney. The presidential candidate from Texas boasts that his economic policy would create 4.9 million jobs in a decade– unlike the dismal situation under the Obama administration, which has only seen a measly 5 million jobs created in the past 22 months.

• I don’t remember how I first found John McKay’s blog, archy, but it has become my essential go-to source for mammoth-discovery news. He reminds us, though, that “It’s not just mammoths” — alerting us to the news that the frozen and remarkably preserved remains of two Pleistocene cave lions were recently discovered in Siberia.

As McKay says, “The Internet really fell down on the job. These are not just lions; they are lion cubs — kittens. Isn’t this the reason the Internet was built?”

Maybe the story will get more attention if it turns out that these cubs were killed by a prehistoric midwestern dentist.

November 18, 2015
Google says that Google+ is fetchin' -- here's what would make it work
Next Post

November 19, 2015 Cursed be anyone who deprives the refugee of justice
Recent Comments
0 | Leave a Comment
Browse Our Archives
get the latest from
slacktivist
Sign up for our newsletter
POPULAR AT PATHEOS Progressive Christian
1