Virginia Ramey Mollenkott is in an ideal position to review the new book by Deborah Jian Lee, Rescuing Jesus: How People of Color, Women & Queer Christians Are Reclaiming Evangelicalism. In order to describe how white evangelicalism in America is being “reclaimed” — or redeemed, or reborn — Lee has to explore the context of it preceding, and requiring, such reclamation. She has to explore what it was that people of color, women & queer Christians were rescuing Jesus from. And that involves a brief history lesson in the tribal dynamics of late-20th-century white evangelicalism.

Mollenkott knows that history because she lived it. That history is her story — personally and professionally. Here’s a taste of her review:

I have been a member of Christian Feminism Today ever since its founding as the Evangelical Women’s Caucus. Later we added “and Ecumenical” to our name in order to include people who could not identify with evangelicalism. (Back in 1975 and into the ‘80s, evangelicals were getting ever-more-deeply involved in right-wing politics, including anti-abortion and anti-queer activism as two of its most energizing platforms.)

Because I was part of EEWC-CFT’s genesis, growth, and the 1986 split over civil rights for homosexuals, I can testify that Deborah Lee’s depiction is accurate. She points out that the split-off group, Christians for Biblical Equality, was able to retain credibility with evangelicals because they affirmed marriage for heterosexuals only. Meanwhile, EEWC was marginalized because of standing up in favor of liberty and justice for all.

Lee’s point here is that “in order to maintain a voice within the evangelical world and make progress on a single issue [such as male-female equality] one must toe the conservative line on every other issue” (p. 125). So the inconsistency of reading the Bible liberatingly on the issue that affirms oneself and reading it judgmentally on every other issue has not escaped Ms. Lee’s notice.

This is a part of my story too. And, in a sense, it’s the story of this blog and of how I came to be a blogger and no longer a magazine editor and a card-carrying member of the Evangelical Press Association.

I come into this story much later than Dr. Mollenkott, years after the “EEWC was marginalized” for affirming the equality of LGBT Christians within the church. And, in a sense, I participated in that marginalization and in their anathematizing. I had to, you see, it was the price of admission. 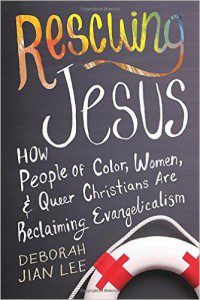 I spent the ’90s working for progressive causes within the white evangelical tribe. I was part of the small strange world sometimes described as the “evangelical left.” That little world — the world of Ron Sider and Tony Campolo and Jim Wallis, of the Christian Community Development Association, Jesus People, Christian Peacemaker Teams, and CBE — has been ably documented recently in a couple of well-received histories. First came David Swartz’s Moral Minority: The Evangelical Left in an Age of Conservatism, and then Brantley W. Gasaway’s Progressive Evangelicals and the Pursuit of Social Justice.

Both of those histories are haunted — implicitly and sometimes explicitly — by the dynamic that Deborah Jian Lee describes, by the ever-present Rule of the Gatekeepers that says “in order to maintain a voice within the evangelical world and make progress on a single issue … one must toe the conservative line on every other issue.”

This rule was the reason I first learned of the history Dr. Mollenkott summarizes. I was taught that history as a way of teaching me the rule. CBE, it was explained, was permitted to maintain a kind of probationary status within the tribe because it also maintained the required official “stance” condemning homosexuality and favoring the criminalization of abortion. The EEWC deviated from those official stances, and was thus erased. Their membership and credibility within the tribe was revoked. No one speaking for them — and no one speaking with them or listening to them — was going to be allowed to speak to any audience of members in the tribe, or to work for any of the tribal institutions, or to publish in any of the journals or popular magazines read by tribal members.

This wasn’t explained as an explicit threat, but it was explained — repeatedly — as The Way Things Are. These were the rules of our own probationary status. Sojourners would be allowed to talk about racial justice and to question militarism, and tribal members would be permitted to listen to them, but only for as long as they didn’t deviate from those other official required stances. Evangelicals for Social Action would be permitted to talk about poverty and “creation care,” and members of the tribe would be free to listen to us, but only for as long as we didn’t deviate from those other stances. In order to maintain our voice within the evangelical world and to make progress on those vitally important issues, we had to toe the conservative line on everything else.

The important thing to understand here is that this was not a hard bargain involving any kind of compromise for those “evangelical left” leaders back in the 1980s and 1990s. They had no problem toeing the conservative line and maintaining the required official stances on gays and baby-murdering because they genuinely believed in those official stances. They had no problem paying this price of admission because they were already paying it anyway.

We shouldn’t think of CBE distancing itself from the EEWC as some kind of cynical political “triangulation” maneuvering. These weren’t people who were secretly in agreement with what the EEWC was arguing about LGBT equality, who then betrayed their own principles in an attempt to preserve their influence in arguing for women’s ordination. They were people who wholeheartedly agreed with the tribal gatekeepers and with the tribal boundaries.

Nor did Jim Wallis or Ron Sider perceive themselves as making some kind of hypocritical deal with the devil in order to be permitted to make progress on the important issues of poverty and peacemaking. They agreed with the official stance, with the tribal boundaries and even with the need to enforce those boundaries. (I discussed all this history — with the example of The Other Side rather than of the EEWC — a couple of years ago in a post titled “Jim Wallis sounds an uncertain trumpet on marriage equality.”)

They were my mentors, and for a long time I agreed with them and agreed with what they agreed with. Until, eventually, I couldn’t anymore.

But that’s my story, and this isn’t some Hollywood movie where the main focus has to be on a white male protagonist who’s only really a minor character tangential to the main event. And the main event here, as the title to Deborah Jian Lee’s book suggests, is the work that “people of color, women & queer Christians” are doing to rescue Jesus from white evangelicalism and all the oppressive ideologies, boundaries and institutional barriers maintained by its vigilant gatekeepers.

Here’s more of Mollenkott’s review of that story:

Ms. Lee introduces the ray of hope that is basic to her thesis: although thus far Christian feminism has been baffled by the right wing’s complementarian movement and by labeling feminists as man-hating, strident and anti-family, nevertheless women are gradually gaining a greater voice in evangelicalism. And they are reaching out online to help other women. Lee urges Christian feminists to fight for every woman’s access to funded health care, education, contraception, prenatal care, and abortion with the same “theological rigor as they extend to efforts supporting egalitarian marriages and women’s ordination” (p. 264).

By contrast to the struggles of evangelical feminists, far more sudden success has come to the LGBTQ Christian movement. Lee provides detailed support for her statement that “it may only be a matter of time before opposition to LGBTQ equality becomes the minority opinion in the evangelical world” (p. 264).

As for communities of color, it is precisely the work of these “minority communities” that has “loosened the conservative grip on evangelicalism” (p. 266). Ms. Lee points out that “racial and sexual minorities, along with their allies, have intentionally focused on building robust national networks that drive collective mobilization, and their aim is systemic” (p. 211). And she suggests that this is the model Christian feminists must imitate in order to overcome the obstacles that have “very effectively defanged the evangelical feminist movement over the past decades” (p. 211). We must work together with racial reconciliation and queer activist groups to achieve justice for women, especially those caught in the traps of poverty and right-wing definitions that blame them for their own deprivations. …

Deborah Jian Lee writes engagingly and includes her own spiritual struggles along with the sweeping historical perspective she has provided. She calls herself an ex-evangelical, but one who has “witnessed profound grace and beauty and strength among marginalized believers who, in the face of hostile exclusion, have held on to their faith and changed their communities. They have reminded me that God is so much bigger than the limitations set by the far Right or by anyone else. In God’s house, there is room for everybody. There is room even for me.” (p. 268).

November 23, 2015 Say goodbye to the old street
Recent Comments
0 | Leave a Comment
Browse Our Archives
get the latest from
slacktivist
Sign up for our newsletter
POPULAR AT PATHEOS Progressive Christian
1