Wheaton College suspends its own credibility

Well, this was sadly predictable. After a brief flurry of news hinting that at least some folks at Wheaton College take its “For Christ and His Kingdom” motto seriously, administrators at the white evangelical school have stepped us to reassure us that this was an aberration: “Wheaton College says view of Islam, not hijab, got Christian teacher suspended.”

Larycia Hawkins, a political science professor at the private evangelical Christian college, announced last week that she would wear a traditional headscarf as part of her Advent devotion to show support for Muslims who have been under greater scrutiny since mass shootings in Paris and San Bernardino, Calif.

“I stand in religious solidarity with Muslims because they, like me, a Christian, are people of the book,” she posted on Facebook. “And as Pope Francis stated last week, we worship the same God.”

But it was that explanation of her gesture that concerned some evangelical Christians, who read her statement as a conflation of Christian and Muslim theology.

“While Islam and Christianity are both monotheistic, we believe there are fundamental differences between the two faiths, including what they teach about God’s revelation to humanity, the nature of God, the path to salvation and the life of prayer,” Wheaton College said in a statement.

The Wheaton administration’s explanation for its actions is not credible. Had the college been concerned about “conflation of Christian and Muslim theology,” they could simply have asked Prof. Hawkins to clarify that part of her statement. They didn’t ask her to do that — they just suspended her. Tenure schmenure.

Wheaton administrators are asking us to accept that this black woman’s suspension has nothing to do with her gesture being, in part, a rebuke to the viciously anti-Islamic rhetoric of political candidates (and a home-state governor) from the party they explicitly support as an article of faith. That’s not credible. 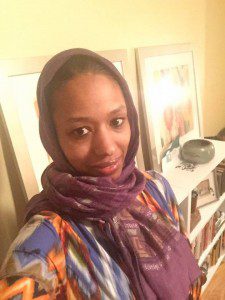 Wheaton administrators are asking us to accept that this black woman’s suspension has nothing to do with appeasing Rich White Christian donors who share that partisan militancy and anti-Islamic sentiment and were thus horrified when this picture of Hawkins wearing a hijab was splashed all over the media as representative of the institution they fund in the understanding that it continue to represent people who look and think just like them. That’s not credible.

Wheaton administrators are asking us to believe that this black woman’s suspension has nothing to do with those same Rich White Christian donors freaking out that a professor whose salary they imagine they pay just said publicly that she has friends at CAIR, an organization that their favorite news channel has convinced them is demonic. That’s not credible.

Wheaton administrators are asking us to accept that this black woman’s suspension has nothing to do with the matter-of-fact recognition of the truth of evolution in her viral Facebook post. That’s not credible.

Wheaton administrators are asking us to accept that this black woman’s suspension has nothing to do with her being black and a woman. That’s not credible.

Everything in Wheaton’s official statements about this suspension and everything they’ve said in response to Tribune reporters in the article above is an assertion that this is about defending Proper Theology from the unqualified.

This idea of Hawkins’ suspension as a defense of Proper Theology is thus not merely laughable nonsense. It’s also sin.

Lying about the obvious role that Rich White Republican Donors play in all of this is also a sin. That’s a particularly silly sin, since this lie isn’t fooling anybody.

This week has brought a flurry of positive press attention to Wheaton College — with scores of media reports praising first the students who wrote an open letter to Jerry Falwell Jr. and then praising Prof. Hawkins for sticking up for her neighbors. As a result, Wheaton administrators have released three press releases this week defending their reputation against these viciously positive reports and insisting that such glowing praise for the college is inappropriate. That’s weirdly inexplicable behavior — unless those administrators are more concerned with appeasing a small group of wealthy donors whose interests run opposite to those of the general public.

Here’s the conclusion of the first of those Please Stop Praising Us press releases — a mealy-mouthed word-stew titled “Statement Regarding Christian Engagement With Muslim Neighbors“:

Some recent faculty statements have generated confusion about complex theological matters, and could be interpreted as failing to reflect the distinctively Christian theological identity of Wheaton College. We will be in dialogue with our faculty, staff and students in the days ahead to ensure that we articulate our love for our Muslim neighbors in ways that are consistent with our distinctive theological convictions.

Mistakes were made. Confusion was generated. It’s all very “complex.”

This opaquely passive construction neatly avoids identifying just who it is that has been “confused” by these “recent faculty statements.” The “confusion” referred to there actually means the angry phone calls from the Rich White Guys who’ve been calling the president’s office threatening to stop writing checks because some biologist or some hippy students or some uppity black woman said something they regarded as insufficiently deferential to Rich White Guys.

And if you want to say that maybe this is too cynical a take on this Statement Regarding Christian Engagement With Neighbors (“regard engagement with neighbors,” just like Jesus said), then please consider the following sentence, in which the administrators offer assurances that “faculty, staff and students” will be forced back in line “in the days ahead.”

And in that context, it’s impossible to see Hawkins’ abrupt suspension as anything other than the punishment of a convenient scapegoat (one who looks nothing like the RWD donors who must be appeased) as a not-so-subtle threat to the rest of the “faculty, staff and students.”

Meanwhile, in Wheaton, students in the grip of finals gathered on the front steps of the college’s administration building to deliver a letter to President Philip Ryken and Provost Stan Jones, demanding Hawkins’ reinstatement.

Wyatt Harms, a senior, said supporting Hawkins, who is “unparalleled in her academics,” was a more urgent priority than studying.

“Dr. Hawkins is an essential part of the community here,” said Harms, a political science major who has taken several of Hawkins’ classes. “She’s a refuge for so many students on campus.”

“Dr. Hawkins has and continues to be an invaluable resource to the students of Wheaton College, particularly to those of color,” the letter said. “She is known for her sharp intelligence, her challenging intellect, and her ability to encourage those around her to live an incarnational faith.

“We believe there is nothing in Dr. Hawkins’ public statements that goes against the belief in the power and nature of God, Christ, or the Holy Spirit that the Statement of Faith deems as a necessary requirement for affiliation with Wheaton College,” the letter continued.

When they reached the second floor landing, the first 20 students crowded into the president’s office, while the rest spilled out into the hallway.

Good. This litigious puppet is wrecking those students’ school due to his obsequious pandering to Rich White Guys who sometimes write six-figure checks. Those students, meanwhile, are themselves writing checks to the tune of about $45,000 a year in the hopes of getting an education at a school where assuring the quality of that education seems to be an increasingly distant secondary concern.

Keep the pressure on, Wheaton students. Sit-in. Walk out. Publish and post and light up social media. You’ll get a better education doing that than Ryken and his overlords will ever allow you to get.