Please be impotently polite in responding to our uncivil abuse of power December 22, 2015 Fred Clark

I keep seeing talk about the need for “civility” and “charity” in discussion of Wheaton College’s recent knee-jerk suspension of its first-ever black woman tenured professor.

Yeah, it’s a little late for that.

Wheaton administrators set the tone. They had every opportunity to be civil or charitable and they emphatically decided not to do that. 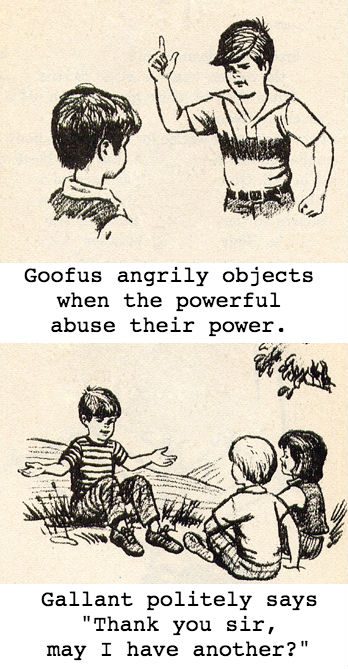 When Dr. Larycia Hawkins noted that Christians and Muslims “worship the same God,” those administrators, if genuinely “concerned” by that, might have asked Dr. Hawkins to explain what she meant. Did she mean that we share a common heritage as Abrahamic religions — as her post itself suggested? Or did she mean to say that Christianity and Islam have an identical understanding of God and that we should all reject the Trinity and the divinity of Christ, rip up our New Testaments, and start learning Arabic so we can study the Koran properly?

The latter interpretation of her remarks would, indeed, be a troubling violation of Wheaton’s Statement of Faith. It would also require a tortured, hostile, and weirdly twisted reading of her words. But the very first decision Wheaton administrators made here was to go with that implausible and hostile interpretation of what she was saying. That is the very definition of “uncharitable.”

Their next step was to summon Hawkins to the Provost’s office — not to ask her about the meaning of her statement, thereby potentially settling the matter, but to inform her that she was being suspended. Again, nothing about that step suggests Wheaton’s administration had any interest in being civil or charitable or even minimally decent.

Even though Wheaton’s provost didn’t want to hear it, Dr. Hawkins did, in fact, offer an explanation of what she meant — and it wasn’t anything at all like the Trinity-denying business that Wheaton’s bosses claimed to be concerned it might be. Her explanation, in fact, cited Miroslav Volf — the theologian that those same Wheaton administrators had invited to come to Wheaton in order to give a lecture about this very topic.

Here’s a video of Volf giving that very lecture at Wheaton:

This lecture was well-received and did not provoke any great controversy or “concern” at the time. No one got called into the provost’s office or suspended for arranging, attending, or applauding that lecture.

But quoting Volf and agreeing with him four years later is, suddenly, grounds for suspension.

Wheaton’s duplicity here is appalling, but I can almost admire the sheer chutzpah it takes for them to say this with a straight face.

One columnist wrote recently that he was heartened that the debate at Wheaton “has been polite.”

And appointing oneself as the adjudicator of what sorts of wholly optional acts of justice might be begrudgingly permitted as dangerous distractions from our paramount duty of verbally assenting to theologically correct white orthodoxy — that’s not polite either. (It’s also a miserably ass-backwards understanding of Jesus that, in itself, rules out the possibility of “correct” theology.)

Ah, but still — it was so terribly rude of some blogger to refer to the administration’s actions as “a total dick move.”

That’s a fair point — it’s certainly a rude phrase. But it’s wrong to say that using such a phrase entails “stooping to their level.” These things aren’t on the same level of rudeness at all. Employing the phrase “a total dick move” is nowhere near as uncivil or low-down and dirty as actually committing what can only be described as, in fact, a total dick move.

I’ll grant, though, that I might have chosen a more polite term. I’m afraid politeness wasn’t my main objective in settling on that phrase. I was simply striving for accuracy. Having found a term that offered such denotative precision and such perfect connotative aptness, it didn’t occur to me to continue searching for a less-precise and less-apt phrase that might be a bit less rude.

I’ve also been told that it was uncivil of me to call for Wheaton president Philip Ryken’s resignation/departure/dismissal. That’s odd. I can’t figure out how it’s not rude to suspend a professor and threaten to fire tenured faculty and yet it is rude to suggest that an administrator should go. Still, let me say this as politely as I possibly can: Considering the impoliteness and imprudence of his actions up until now, a dignified exit may be the only dignified option remaining for President Ryken.