Maybe this year will be better than the last

Maybe this year will be better than the last January 2, 2016 Fred Clark

• Our extended combined family had a strange and somber New Year’s Eve, shadowed by the death of the girls’ last-surviving grandparent. This has been a sad time and a rough week for them, for their dad and his sisters, and for all the various in-laws and ex-laws connected in one way or another to their sweet, tough Nana.

When I first met her many years ago, dementia still allowed her occasional moments of clarity and recognition, but those had slowly become fewer and farther between. Her loved ones had been losing her gradually, over time, but that didn’t make this final loss any easier for them.

• “Another Year That Shouldn’t Have Been: The 50 Most Embarrassing Stories From 2015.”

If my bosses’ bosses at the Big Box were either: A) intelligent self-interested economic actors, or, B) capable of basic human decency and empathy, they would view this as Good News. Tens of millions of their customers just got a raise. Tens of millions of Americans who certainly have deferred maintenance/home-improvement projects now have a bit more income. Some of that income will almost certainly be spent in the Big Box chain’s 2,000+ locations. Cha-ching!

But this is not how my bosses’ bosses view this news. Because neither A nor B. That’s also why those folks are stupidly and self-destructively lobbying to prevent any more of their customers from getting such raises in the future. 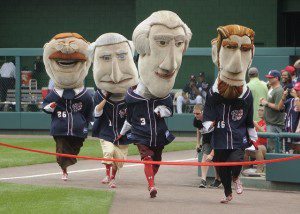 That’s how this works. It has to do with integrity, fidelity, and character. Sure, voters in the Bronx weren’t thrilled that their mayor had long rooted for the Yankees’ hated rival. Nor were Pittsburgh residents happy to have a governor who would always cheer for the Eagles against their beloved Steelers. But those voters recognized, and honored, those candidates’ loyalty to their teams — however misguided and misdirected such devotion may have seemed to them.

Voters, in other words, will respect a good fan of the wrong team. But they can never respect a fickle, faithless, pandering “fan” of the right team. A candidate who is willing to abandon their loyalty to their favorite team can’t be trusted to respect any other, more important, principles or promises.

Voters also respect being respected. They don’t tend to like candidates who treat them as shallow, thoughtless sheep who can be tricked into voting for anyone who cheers for the same sports teams they do.

Carly Fiorina would have earned credibility with Iowa voters if she had maintained her loyalty to her alma mater and cheered for Stanford in yesterday’s Rose Bowl. By abandoning that loyalty in a transparent bid for Iowa votes, she lost credibility with them and, as a bonus, insulted their intelligence.

• “Off-duty police officer accidentally shoots relative in North Las Vegas.” Not to be confused with the case from Florida last week in which the “Step-daughter of high-ranking Florida police official accidentally shot, killed by mother who mistook her for home intruder.”

Dear Trigger-Happy Police Officers: Please try to at least keep track of family members who live with you.

• The title for this post comes from this Counting Crows song which, like a lot of their songs, manages to be sad and hopeful at the same time. That seems apt around here just now. It’s still cold and dark, but we’re turning a page.

December 29, 2015
Such things will happen in time
Next Post