This was originally posted in 2011.

For an illustration of what we Christians celebrate on Epiphany, think of the movie Freaky Friday. Either one will do — the original with Jodie Foster and Barbara Harris or the remake with Lindsay Lohan and Jamie Lee Curtis. Neither is really a great movie, but they’re both memorable and entertaining. The story is one we seem to like a lot, since we retell it with slight variations every couple of years in movie after movie. 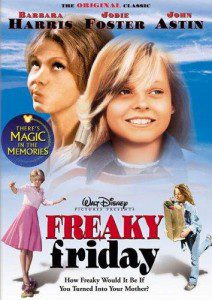 In Freaky Friday, a mother and daughter switch places — switch bodies, actually. How this happens isn’t really the point. The story isn’t about the dynamics of body-switching, it’s about the empathy and understanding that come from inhabiting another person’s life. That understanding is a kind of epiphany, but it doesn’t come instantaneously. Barbara Harris’ first thought is not “Ah, so now at last I understand my teenage daughter,” but rather, “Good grief, what am I doing here?”

That’s an epiphany. That’s the Epiphany we celebrate today.

Anyway, a belated Happy New Year to one and all. May your year be filled with epiphanies large and small, and may all your Fridays be freaky.

January 5, 2016
Stonehenge, Yucca Mountain, and the Bible
Next Post

January 6, 2016 A Ted Cruz win could further Bartonize 'mainstream' white evangelicalism
Recent Comments
0 | Leave a Comment
"It's not so much about modern Japanese, Korean and Vietnamese, those just illustrate how flawed ..."
Lsamaknight What do you see when you ..."
"In Britain, "disableism" is more common."
Marja Erwin Jan. 28 Flashback: The unpersecuted
"Ooh, I wonder where the kid learnt the word from?"
Iain Lovejoy Postcards from the class & culture ..."
"Pretty, pretty, pretty!"
Iain Lovejoy Postcards from the class & culture ..."
Browse Our Archives
get the latest updates from
slacktivist
and the Patheos
Progressive Christian
Channel
POPULAR AT PATHEOS Progressive Christian
1