Stonehenge, Yucca Mountain, and the Bible

Philip Jenkins offers a weird, wonderful, wandering rumination on historical memory and “The Ghosts of Stonehenge.”

We’ve learned a lot in recent years about the history of this ancient monument in southern England and Jenkins reviews some of the new theories about its origins:

There was apparently a gap of some centuries between the time when the stones were quarried, around 3,400 BC, and when they reached Wiltshire to form the basis of historic Stonehenge, around 2,900 BC. The archaeologists involved offer an explanation for this, namely that the stones originally stood as a stone circle in West Wales, in Pembrokeshire. They were then moved as a unit to southern England, possibly because they were of such unusual sanctity. Alternatively, perhaps a tribe of people moved and migrated, and they decided to bring their sacred remains with them. Or else, Tribe A defeated and conquered Tribe B, and annexed their sacred site as a war trophy.

From there, Jenkins takes a fascinating turn to “one of the most wholly bogus and discredited literary sources of the Middle Ages, the History of the Kings of Britain (c.1150) by Geoffrey of Monmouth.” Jenkins wants to be very, very clear that Geoffrey was an utterly unreliable peddler of invented stories. Even Geoffrey’s contemporaries, Jenkins stresses, “recognized he was making most of it up.”

And yet, Geoffrey’s fantastical “history” of Stonehenge (which involves Merlin and Irish giants, among other things) also includes these two elements: That the stones were originally quarried far to the west, and that they were first part of an earlier monument that was transported to the present location. And those two elements, long thought to have been fanciful, are now thought to be roughly accurate.

Never, please, ever accuse me of giving credence to Geoffrey of Monmouth on anything. The whole story might be a lucky guess by a great story-teller and historical novelist, which is what he was. … Also, Geoffrey is wrong on so much.

But the idea of that relocation, that second hand quality, does take me aback. Is it possible that local folklore in early medieval times remembered a story that was then reported by some writer, which Geoffrey is transmitting?

… It is tempting, but the timescale is daunting. We are after all talking about a move around 3,000 BC.

And thus we arrive at the very intriguing question he’s exploring here: How long can history and memory be preserved without any written record? And, even if we stipulate that some vestigial memory might linger after many centuries, is there any way to separate those legitimate memories and histories from all that has accumulated around them?

It’s a tantalizing problem. We want to know more than we do — maybe more than we can — about the ancient past, but the record of it just isn’t there. What we have, instead, are ciphers and puzzles, like Stonehenge itself. Here is a tangible message from the world of 5,000 years ago, but we have few clues as to how to understand it.

For his part, Jenkins is doubtful that older traditions and memories can long survive without a written account:

I am very skeptical when ancient or medieval authors claim to pass on older traditions, because they so clearly demonstrate how rapidly accurate information fades away. In eighth century England, the author who wrote the poem The Ruin describes the country’s ruined Roman cities in such a way that shows he has not a clue about their actual operation or function. That is over a gap of just four hundred years – and yes, these cities are likewise attributed to “giants of old.” The Biblical account of the conquest of Canaan several centuries previously describes the destruction of the city of Ai, a name that means simply “heap of ruins.” That was, likely, all the memory that had survived of the site and its fate, and a story was invented accordingly. Claims that accurate tradition can survive more than a century or two without written continuity need to be examined very carefully.

And yet, he says, he still wants to cling to some “ghosts” and to some “illusions about oral tradition extending across several millennia.”

I don’t think that’s entirely impossible, or wholly illusory. Clearly, some kinds of oral traditions did, in fact, survive for millennia — trades and crafts, agriculture, fishing, winemaking, masonry, etc. Those skills were remembered and retained out of necessity. But for less practical arts and lore — who built that temple? why is that mountain sacred? how did our people come to live here? — Jenkins is, alas, probably right to be very skeptical that any meaningful truth might have been preserved for very long.

This recalls the intriguing problem addressed by the Human Interference Task Force and its ongoing efforts to figure out some kind of warning sign for our nuclear waste that might endure for 10,000 years and still communicate its message millennia from now when we and our language and symbols are all long gone.

Whatever warning sign we might imagine, we can also imagine it being misinterpreted or misunderstood by whatever future visitors might stumble across our waste sites thousands of years from now. Slate’s design blog had a good summary of this dilemma a few years ago: 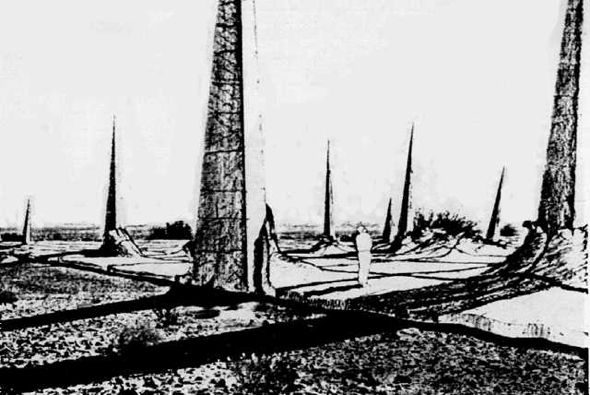 Ruling out language and symbols, the panelists thought about using some visual storytelling. A landscape artist and architect named Mike Brill envisioned huge needles jutting up from the ground — a “landscape of thorns” — to make people scared of being in this dangerous place. But there’s no way of knowing that this ominous landscape wouldn’t become an attraction in itself and actually invite people to explore it.

Even if this landscape of thorns still somehow signified “keep out: danger,” the visitors of 10,000 years from now might take that as an indication that it guarded some treasure, rather than still-deadly toxic waste. Or, like the archaeologists now studying Stonehenge, they might be drawn to the site to study it so as to try to learn more about us, the mysterious people of 10,000 years ago.

But there’s a more immediately relevant point in Jenkins’ ramble, too. He hints at it there in his reference to the biblical story of Ai — a story, he notes, that seems to have been “invented accordingly” to account for a heap of ruins.

That story was written down some 2,400 years ago, more or less. So already, with that written story, we’re dealing with a text written by people who lived in an almost incomprehensibly different world from our own. But that text purports to tell a much older story still, one that took place hundreds of years earlier and one that claims to have endured through all those centuries without any formal record or written account. As Jenkins says of Stonehenge, “the timescale is daunting.” For the Book of Joshua no less than for that ancient monument, “Claims that accurate tradition can survive more than a century or two without written continuity need to be examined very carefully.”

Jenkins is writing on Patheos’ evangelical channel, so he’s tip-toeing a bit here. But he’s not suggesting anything that would seem strange to any biblical scholar — not even to most evangelical biblical scholars. The “histories” of the Hebrew scriptures were written centuries after the events they describe, and, generally speaking, we regard the historical reliability of many of them as somewhere around that of Geoffrey of Monmouth.

We do not have any tangible history of the city of Ai, and the story we have in Joshua shouldn’t be thought of as giving us such a history. But what we do have is that story. That story was written down and preserved as a story, eventually entering the canon of the Hebrew scriptures and, much later, of the Christian Bible. Is that story “history”? No, but that story is scripture. It should be read as what it is and not as what it’s not. It’s always a good idea to read things that way.