• “An actor whose arch features and languid diction were recognisable across the generations …” Dammit. (I’m leaving that “s” there in “recognisable,” because when Alan Rickman spoke, you could almost hear the British spelling.)

And now I will never get my wish that he would one day be hired by Apple as the new voice of Siri.

• I do not like Ted Cruz. At all. I think he’s a bad person and a Very Bad senator and that he would make a Very, Very Bad president and that anyone who votes for him should feel bad. I also think he’s kind of a jerk and that he’s not nearly as smart as he thinks he is.

Having said that, I’m really perplexed and bothered by the arguments that he’s ineligible to serve as president of the United States because he’s not a “natural born citizen.” I get that this legal term — in the Constitution itself — is more complicated than it might seem. The technical objection, I gather, stems from the idea that Cruz is not a natural-born citizen, but a Canadian-born “alien” who was naturalized as a citizen due to his mother’s American citizenship. Maybe that’s technically arguable and maybe it needs to be clarified by the courts or even by constitutional amendment.

But in the larger picture, this whole realm is a cesspool of antiquated thinking that gets really ugly, really fast. It’s based on logic that’s, at best, adjacent to ideas of nationality, “blood” and “soil” that are neither admirable nor defensible. Nor do those ideas seem logically sustainable in an age when international travel isn’t a matter of wooden ships with sails.

Eight years ago at this time, there was a senator running for president en route to winning his party’s nomination. He supported closing Guantanamo, banning torture, passing comprehensive immigration reform, and creating a cap-and-trade system to address the climate crisis.

That candidate’s name was John McCain. His running mate endorsed the same platform. Her name was Sarah Palin.

The radicalization of Republican politics is not new, but it’s easy to forget sometimes the speed with which the GOP headed over the right-wing cliff. 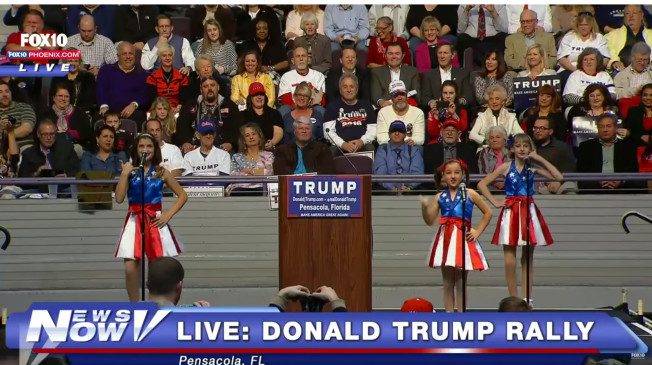 •  I probably should have some deeper analysis or more thoughtful response to the news that the Episcopal Church has been suspended by the Anglican Communion because of its support for marriage equality. But for now all I can think is good for the Episcopal Church! Well done, good and faithful servant.

Here’s a video re-enactment of the Anglican proceedings, with Tony Hale as the Archbishop and Joshua Gomez as the Episcopal Church:

January 13, 2016
'None can be called deformed but the unkind'
Next Post

January 15, 2016 Left Behind Classic Fridays, No. 64: 'The Blair Witch Video'
Recent Comments
0 | Leave a Comment
"Not all that surprising a reason. Heck, even if Trump was entirely reasonable, he might ..."
WingedBeast ‘A man turns his back on ..."
"Even without the context of the Cuomo affair (which I honestly hadn't heard of, being ..."
Theo Axner ‘I catch him when he’s straying, ..."
"Wow. That's gone straight onto my Christmas playlist."
Scurra ‘A man turns his back on ..."
"It turns out that there are contemporary songs about the Spanish fluhttps://www.pbs.org/newshou...The 1919 influenza blueshttps://www.youtube.com/wat...Jesus ..."
stewart ‘A man turns his back on ..."
Browse Our Archives
get the latest updates from
slacktivist
and the Patheos
Progressive Christian
Channel
POPULAR AT PATHEOS Progressive Christian
1