I do not live within walking distance to church — particularly not on a morning like this one, with the sidewalks here in Chester County buried under two feet of snow. Church services are cancelled today all over the area — with churches encouraging people not to risk driving on hazardous roads. Everybody is staying safe and staying home and taking a deep breath before starting the process of digging out.

And so this morning reminds me of a story about my friend Sherm, from back 25 years or so ago, a few years after we’d graduated college. He was working down in DC for some environmental group, living in a little apartment not far from the National Mall.

One day that winter they had a Sunday morning much like the one the East Coast is having today, with everyone waking up to the aftermath of a weekend blizzard. From Virginia up through New England, nobody was going anywhere unless they absolutely had to. 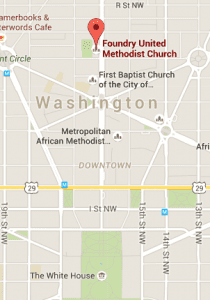 But Sherm didn’t have a car, so he didn’t have to dig out his driveway, and he didn’t have to worry about whether or not the streets were plowed. He’d just started attending Foundry United Methodist, and it was only a few short blocks from his apartment. So he figured, blizzard or no blizzard, it was Sunday morning and he could walk to church. He and his girlfriend laced up their boots and zipped up their parkas and trudged to church that Sunday morning.

When they arrived, the only person there was the church’s pastor. He welcomed them warmly to the empty church. He’d walked there that morning too, just in case anybody else turned out to be foolhardy enough to do the same. Services were cancelled due to the snow, he explained. But he invited them to come in and warm up a bit before heading back home.

And that’s what they were doing when a second little group arrived. It was a couple who lived just up the block, trudging to church along with their teenage daughter and a couple of Secret Service agents. The pastor greeted them just as he had Sherm and his girlfriend. And then he suggested that, since they’d all braved the snow to get there, they might as well do church.

So they pulled together a little circle of folding chairs, and the pastor, and Sherm, and his girlfriend, and the president, and the first lady, and their daughter, shared a little Bible study, and prayed together, and took communion. And then they all hung out for a bit afterward, drinking coffee and fellowshipping a bit before everybody bundled back up and headed back out into the snow to walk home.

The thing is, Sherm didn’t head to church that morning because he was worried about his public image, or because he wanted to pander to church-going voters, or for any other cynical or purely political reason. He bundled up and headed out in the snow that morning for the only reason anyone would — because it was Sunday and church was important to him.

I don’t mention that story to praise or endorse that particular president or first lady. But it’s a reminder, I think, that politicians and political leaders are people too, and their behavior, like that of other people, involves a whole host of reasons and motives that can’t be explained or accounted for as entirely cynical or political or conniving. Sometimes politicians go to church to stump for votes, or to be seen going to church. Sometimes they go for the same reasons anybody else might — even when it’s snowing.

January 25, 2016 'Do it to Julia!' is not a prayer of salvation
Recent Comments
0 | Leave a Comment
Browse Our Archives
get the latest from
slacktivist
Sign up for our newsletter
POPULAR AT PATHEOS Progressive Christian
1