‘Do it to Julia!’ is not a prayer of salvation

I was surfing about on LeftBehind.com because of course I was, when I came across a bit of promotional material for the series in which Tim LaHaye tells us a story. It is, he says, a true story:

One woman asked me to sign her dilapidated paperback of Left Behind. Turning it over, I said, “This book looks like it has a story behind it.” Through her tears she told how her atheist father, who loved reading fiction, bought it for just 25 cents at a garage sale. When he found out it was a Christian book he wanted to get rid of it and gave it to her. She read it and accepted Christ. Then she gave it to her brother and he did the same. He passed it on to their four siblings and all of them accepted Christ. Their lives were so changed over the ensuing nine months that the woman’s father said, “Do you still have that book I gave you? I’d like to read it.” He did and he too became a believer! Think of it — seven atheists won to Christ for 25 cents! Now that is what I call a bargain — and that’s the real reason we write these books. For writers it doesn’t get any better than that.

That’s an incredible story. I mean that story is literally not credible. Pics or it didn’t happen. 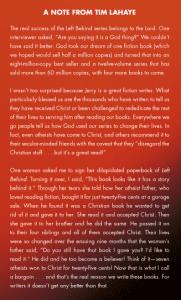 It’s not just that I doubt this story because of LaHaye’s lazy imitation of the template for every grifter’s vague testimonial for their vitamin supplements, or homeopathic cancer cure. And it’s not just because of the sketchy omission of the very details that he ought to be celebrating if this story were at all true.

I cannot believe this story because I have read Left Behind and I know that the figure of “Christ” it presents to readers is someone wholly unacceptable. If some reader comes to know of Jesus Christ solely through that book, that reader might choose to flee from this Christ, or to oppose him, but never to turn toward such a monstrous, capriciously vengeful, petty, bloody, lethal slaughterer of innocents and choose to “accept” him.

Left Behind borrows from (i.e., rips off) many earlier works of premillennial dispensationalist “Bible prophecy” fiction — from the novels of Salem Kirban, Sydney Watson, and O.R.B. Pattison to the Thief in the Night films of Donald W. Thompson. All of those were explicitly evangelistic — intending, or hoping, to scare the reader into salvation by painting a frightening picture of the fates that await the unsaved. That may be a lousy approach to evangelism, but you can’t read or watch those works without appreciating the earnest urgency those storytellers felt for the salvation of their audience.

None of that is true for Left Behind. It’s central message is not that readers can be “saved,” but that they can be right when others are wrong. It’s triumphalistic, not evangelistic. When the characters in this story get saved, they are not so much appealing to God’s grace as they are redirecting God’s wrath elsewhere — redirecting it toward anyone and everyone else. It’s not “Lord have mercy,” but “Do it to Julia!”

So, no, I don’t believe Tim LaHaye’s little story. I don’t believe that this nameless woman read Left Behind and therefore accepted Christ anymore than I would believe it if his story had her getting “saved” after reading a 25-cent garage-sale copy of 1984.

January 25, 2016 NRA: Third-hand excitement
Recent Comments
0 | Leave a Comment
Browse Our Archives
get the latest from
slacktivist
Sign up for our newsletter
POPULAR AT PATHEOS Progressive Christian
1