• When you’ve surrendered the moral high ground to PayPal, Bank of America and Charles Barkley, you’re not in a good place. Also, kudos to Bruce Springsteen for being The Boss, but our friends at Saturday Chores remind us that there are other ways to support those harmed by North Carolina’s bigot bill.

• Chris Williams and Josiah Hesse have come to different places in their spiritual lives, but they started in similar places — the pop-apocalyptic white evangelicalism of Tim LaHaye’s “Bible prophecy.” Williams writes about revising and retaining his still-mostly evangelical faith in “Leaving Rapture culture behind.” Hesse writes about his loss of faith — or his relocation of it, perhaps — in “Apocalyptic upbringing: how I recovered from my terrifying evangelical childhood.”

I sometimes focus more on the wider cultural and political effects of this nightmare theology and the way that LaHaye’s feverish vision influences American politics, the white evangelical church, and the way millions of Americans read and interpret the Bible. But these personal, individual stories are just as important. This stuff traumatizes the people who take it most seriously. It harms them. And that’s just plain wrong.

• On a related note, John Fea has been following historian Randall Stephens’ grimly hilarious Photoshop reimagining of the Library of America series if it were to reflect the work of some of our more influential literary figures. 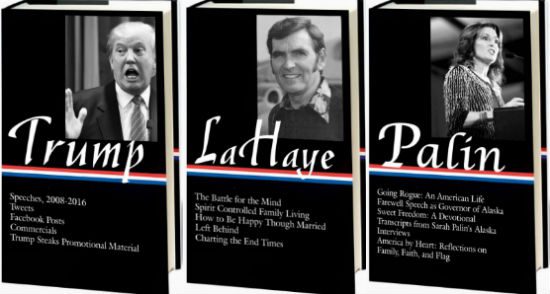 • The Marshall Project is an excellent resource for anyone interested in mass-incarceration and the American criminal justice system. Writing there today Marc Mauer offers a good one-stop summary of “Bill Clinton, ‘Black Lives’ and the Myths of the 1994 Crime Bill.”

The short version: That bill can’t be blamed as the primary cause of mass incarceration, which began years before, but parts of the law contributed to and exacerbated the problem. The law itself is less troublesome than Clinton’s general “tough on crime” approach in the 1990s, which was a common Democratic response to the Willie-Hortoning of Michael Dukakis in 1988. The idea, I suppose, was to avoid losing votes on “crime” by reducing the difference between the two parties on the issue. Here’s Mauer’s conclusion:

The crime bill did not inaugurate the era of mass incarceration, but it certainly escalated the scale of its impact. Two decades later we can see that the political environment on these issues is evolving. Many Americans understand that we incarcerate excessively, that the drug war has wreaked havoc on communities, and that racial disparities throughout the criminal justice system are intolerable. Pending legislation in Congress would ameliorate some of these problems at the federal level; many states are seeking similar reforms. Belatedly, we’ve learned the hard lessons of the “tough on crime” era.

Again, this is worth revisiting to learn from past mistakes, but it shouldn’t mean much for the Democratic primary campaign 22 years later. Both Hillary Clinton and Bernie Sanders supported that bill and that approach in 1994, and both have learned a lot, and changed a lot, since then.

Also too, VAWA still ain’t nothing.

• And since we’re back in 1994 again, here’s a better reason to remember that year: Freedy Johnston’s “Bad Reputation.”