The United States Justice Department sued Trump père et fils for violating the Fair Housing Act of 1968 in operating 39 buildings they owned. Testifying in his own defense, young Donald (who would soon be seen around town in a chauffeured limousine with a license plate reading “DJT”), testified that he was “unfamiliar” with the landmark law. As the evidence in the federal case against the Trump organization became close to incontrovertible, he told the press the suit was a conspiracy to force them “to rent to welfare recipients,” a form of “reverse discrimination.” This proud and open refusal to rent to welfare recipients — whom he said contribute to “the detriment of tenants who have, for many years, lived in these buildings, raised families in them, and who plan to live there” — was Donald Trump’s defense against racism.

Deborah Jian Lee, “Is There Hope for a Truly Progressive Evangelicalism?”

When I think about my departure from evangelicalism, I’m aware that it’s not unique. I’m part of a swarm of young people exiting the church and sleeping in on Sunday. But I can’t help but wonder: What if leaders like Lisa, Jennifer or the Biola Queer Underground had defined evangelicalism, instead of leaders like James Dobson, Jerry Falwell and Mike Huckabee? Would fewer of us be sleeping in on Sunday? Would more of us be engaged in faith communities, mobilizing around social justice issues and working in solidarity with society’s “least of these?”

In my opinion, it is more accurate to view American “evangelicalism” as something new, something that came into existence in and as the “religious right.” This is not to say, of course, that our evangelicals have no genealogical roots in the more pietistic and fundamentalist strands of American Christianity. But the idea that “evangelicals” were once all about proper theology and have since turned to politics is wrong. Evangelicalism in the contemporary American sense of the term has always and only been a political movement — a form of identity politics that has always tied together Jesus, America, and whiteness. 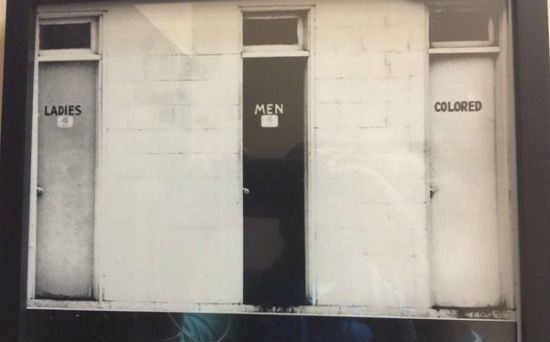 Andre E. Johnson, “When Black People Were Not ‘Ladies’ or ‘Men'”

Maybe one of the reasons why several members of the church see bathroom bills and religious freedom arguments as discriminatory was because some of them lived during the time when the bathrooms in the picture above was deemed okay. As the picture indicates, black people were not “ladies” or “men” just “colored.” “Ladies” and “men” were reserved only for white people. Also, there were no calls for concern about black women and men using the same bathroom —transgendered or otherwise. Additionally, there was no concern about men going into bathrooms with “little girls.” Just if you were “colored” you all had to share the same bathroom.

April 27, 2016 White evangelicals and 'the social upheaval of the '60s'
Recent Comments
0 | Leave a Comment
Browse Our Archives
get the latest from
slacktivist
Sign up for our newsletter
POPULAR AT PATHEOS Progressive Christian
1