White evangelicals and ‘the social upheaval of the ’60s’

“Civil Rights Protests Have Never Been Palatable to White People.” Mahroh Jarangiri points us to some dismaying charts from public opinion surveys in the early 1960s showing that a majority of (white) Americans disapproved of Freedom Riders, lunch-counter protests, and the historic March on Washington. 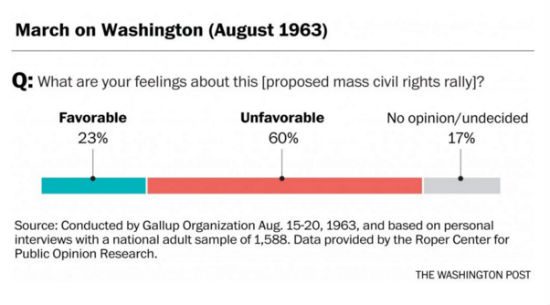 Nowadays, Gallup would break down these numbers to determine the religious and partisan make-up of that 60 percent who viewed the march unfavorably. They didn’t do that in 1963 the way they do now partly because the divisions and identities that exist today weren’t yet a thing. This was pre-Southern Strategy and pre-Reagan, before the great sorting that eventually made white opposition to black civil rights a partisan matter. The Dixiecrats were still Democrats back then — and so were many white evangelicals.

Over the following two decades, that 60 percent rebranded itself as the “silent majority,” or “Reagan Democrats,” or “pro-lifers,” or “values voters.” This is how and when they became white evangelicals — the new name and new religion for people who were discomfited by Freedom Riders and the March on Washington, by the Civil Rights Act and the Voting Rights Act, by Brown v. the Board of Education, by the Fair Housing Act, by Engel v. Vitale* and Loving v. Virginia, and by the rise of feminism.

Usually, this is stated with a polite euphemism. We don’t name all of those things specifically but, instead, we just say that white evangelicalism arose in response to “the social upheavals of the 1960s.” That allows us to pretend that this is about something else — about sex, drugs and rock ‘n’ roll, rather than about the backlash to increased legal equality for people of color and for women. It blurs the March on Washington with Woodstock, allowing the white folks who were horrified by Martin Luther King Jr. to pretend they were instead horrified only by the sight of stoned hippies blissing out in the mud.

But that won’t do. Woodstock was a sideshow. Wavy Gravy was an amusing fellow, but he was not an epoch-defining figure who transformed America. “The social upheavals of the 1960s” that prompted white evangelicals to transform themselves and their religion into the partisan voting bloc they constitute today doesn’t refer to Woodstock or to Sgt. Pepper’s any more than it refers to the Apollo program. That’s never been what this is about. It’s about feminism and the Civil Rights Movement and the desire of that 60 percent to stand athwart history and yell stop.

“The social upheavals of the 1960s” — or, simply, “the ’60s” — means Civil Rights and feminism. Full stop. White evangelicals were the people who opposed those things back then. And who oppose those things today.

* The school prayer decision in Engel might not seem like it fits with the rest of that, but the reaction against that decision isn’t really about piety or “keeping God in schools” as much as it is about the maintenance of sectarian, tribal hegemony. So it’s of a piece with the opposition to Freedom Riders, the March on Washington, and all the rest. And I say “is” rather than “was” because, even though that ruling is now more than 50 years old, the backlash against it remains a present-tense present tension.

April 28, 2016 Seems like a thousand years to go
Recent Comments
0 | Leave a Comment
"Darkonese Language/Culture Post #281 (Sexuality-22): culibonia (pronounced "koo-lih-BOH-nee-ah"), a female ‮etutιtsorp‬‎ who specializes in ‮lana‬‎ ..."
Professor Rudolf Laschenkohl Backwards and forwards
"It's a very stressful time for them. Apparently, murder is no longer legal for some ..."
T&P Backwards and forwards
"The last half of the post gave me visceral flashbacks to the Isabel Fall affair- ..."
DC Kurtz Backwards and forwards
"The pharmacy at the grocery store had an open slot to schedule a vaccination appointment. ..."
Marja Erwin Backwards and forwards
Browse Our Archives
get the latest from
slacktivist
Sign up for our newsletter
POPULAR AT PATHEOS Progressive Christian
1