The Fall of the House of Graham (ongoing)

Billy Graham was an evangelist who believed that proclaiming the gospel should be the top priority for Christians. Hell, after all, is worse than hunger, because Hell is forever. And Hell is a more urgent problem than any earthly, temporal injustice, because eternal, endless torment in Hell is the greatest injustice imaginable.

Wait — we mustn’t allow ourselves to admit or acknowledge that. Let’s just say that sparing the unsaved from eternal torment in Hell should be a greater priority than trying to end any of the earthly injustices that will eventually, like all things of this world, end anyway.

Good works can be dangerous, then, because they can distract Christians from the priority of preaching the gospel and proclaiming the word. Or they can tempt us to think that we’re earning our salvation by good works, instead of by grace. (Avoiding good works is thus a good way to ensure our theology remains steadfastly Lutheran.) And good works can muddy the call to salvation, producing “rice Christians” who join the church because they see Christians feeding the hungry and standing for justice and want to experience those benefits and to be aligned with these loving people instead of joining the church because they recognize that they’re no-good wretched sinners who deserve such miseries.

But still though, Billy Graham was a Very Nice Man and he recognized that charity and some forms of good works were also Very Nice as a commendable, tertiary option for Christians to participate in after they had fulfilled their primary duty of proclamation evangelism. So around 40 years ago, Billy took over a charity called Samaritan’s Purse, a relief and development agency started by Bob Pierce, the same guy who had previously founded World Vision.

Since Billy Graham led a huge network with millions of supporters, Samaritan’s Purse became a very large charity that has, over the years, done a great deal of very impressive work. They’ve fed the hungry, dug wells, tended the sick, and brought emergency aid to the victims of natural disasters. The organization is probably best known for less front-line projects — things like Operation Christmas Child, which is also nice and lovely (even if it’s a bit like Ebenezer Scrooge buying that Christmas goose for the Cratchit family but then not turning around to give Cratchit his necessary and well-deserved raise). 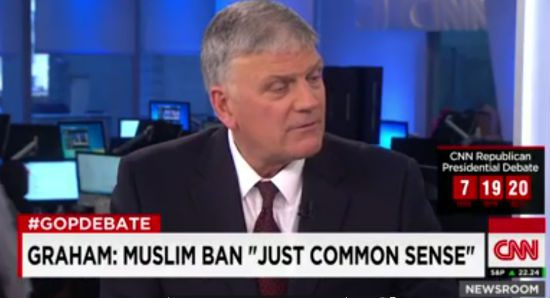 It hasn’t always been pleasant for Billy Graham either. White evangelical institutions tend to be dynastic, so Graham’s son was the heir apparent to his ministry. But the kid was troublesome, not displaying the sort of temperament, character or responsibility that marked him as a worthy successor to his widely respected father. So, to keep the kid out of trouble and to provide a bit of training in the family business, Franklin Graham was named the president of Samaritan’s Purse.

For a while that worked. A big nonprofit functions kind of like an embassy. Yes, technically, the ambassador is the one person “in charge,” but the institution and its bureaucracy can operate without any ambassador in place, and they can keep doing what they do, effectively, even during the tenure of a clueless and incompetent ambassador who doesn’t even speak the native language. As long as the guy technically “in charge” doesn’t try to interfere with that operation, the embassy can withstand even the most feckless political appointee. (See also: university presidents.)

But in recent years — particularly since the election of a black president caused Franklin to completely lose his mind — the heir apparent has asserted a greater control over the charitable organization his father charged him with not destroying. Like his father, Franklin Graham has always understood the charitable work of Samaritan’s Purse as secondary to the primary calling of Christian ministry. But, unlike his father, Franklin doesn’t believe that this primary duty is one of proclaiming the gospel. For Franklin, the primary duty of Christians is the fundraising freak show of the “culture war.”

And Franklin Graham is not a subtle culture warrior. All of the appalling things Donald Trump has ever had to say about Muslims? Franklin Graham said them first. When his hateful speech calling for religious war led some UK moms to question their support for the otherwise Very Nice holiday gesture of Operation Christmas Child, Graham sicced his lawyers on them — threatening lawsuits to anyone who criticized Samaritan’s Purse on the online forum Mumsnet. That kind of takes the whole feel-good Christmas spirit out of the equation, doesn’t it?

Jeff Adams, a spokesman for Samaritan’s Purse Canada, confirmed leaders who represent the group must sign a statement of faith recently changed to explicitly reject gay marriage and abortion.

“The amendments include a specific mention that ‘human sexuality is to be expressed only within the context of marriage,’ that a marriage by Biblical definition is between ‘a genetic male and genetic female,’ and that ‘human life is sacred from conception to its natural end,’” he said in an emailed response.

Sure, Operation Christmas Child is also about spreading Christmas cheer to needy kids around the world. But, more importantly, it’s about kicking same-sex couples and criminalizing abortion.

So, if you think denying civil rights to same-sex couples and criminalizing abortion are of paramount importance, and you’d also, secondarily, like to brighten up the holidays for some (heterosexual, non-Muslim, anti-feminist) children, then Franklin Graham has just the thing for you.

Otherwise, as now-former volunteer coordinator Kay Cossar put it, “If you are a supporter of this group, you may want to reconsider.”

It is no coincidence that this parallels a similar devolution in the Republican Party — made manifest and official by the tea party and the nomination of Donald Trump. That is what the transition from Billy Graham to Franklin Graham is all about — the merger of white evangelicalism and the Republican Party. And, as mirror-image twins Franklin and Donald demonstrate, that has been a disastrous merger for both sides.