I want to commend Jennifer Shutt of Roll Call for her report — “Homosexuals ‘Worthy of Death’ Bible Verse Read Before Key Vote.” Shutt includes a detail not included in reports on the same procedural vote by congressional reporters for The Hill, or for Politico, or for Talking Points Memo.

In one sense, this detail is only tangentially important. The news here is basically what TPM’s Caitlin MacNeal describes in her summary of all these reports:

Ahead of a Thursday vote on an energy and water spending bill that included an LGBT amendment, one Republican member of Congress began reading from the Bible during a Republican caucus meeting, prompting several members to leave.

Rep. Rick Allen (R-GA) read a passage from the Bible denouncing homosexuality, suggesting that members who supported the LGBT amendment would violate their faith. …

Allen’s comments upset some members, who walked out of the Republican policy meeting in protest.

“It was f—ing ridiculous,” one Republican member in the room told The Hill.

“A good number of members were furious,” a Republican told Politico about Allen’s remarks. “There was some Scripture that was read and the like.”

And really, that covers the basic news here. Rep. Allen quoted “some scripture,” suggesting that LGBT people were condemned according to the rules of his sect, and argued that this sectarian belief should determine his vote and the votes of his colleagues.

Rep. Allen’s understanding of the First Amendment, of the Constitution as a whole, and of religious liberty in general, seems to be just as his GOP colleague describes: “F—-king ridiculous.” (This nameless representative, I believe, is actually paraphrasing Roger Williams. Or maybe Mary Dyer. Or the Flushing Remonstrance. It’s one of those — I’ll have to look that up.) 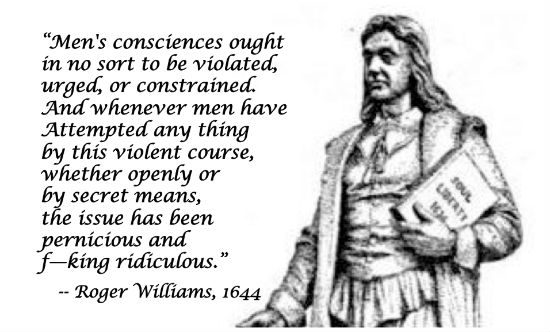 That’s the top-line news story here. Rep. Rick Allen, R-Georgia, does not understand the First Amendment. This man who swore an oath to uphold the Constitution doesn’t seem to agree with the Constitution. And he believes that the sectarian tenets of his sect should be sufficient and binding for secular law and for members of every other sect or of no sect at all.

Rep. Allen is so utterly dim, in fact, that even his fellow Republicans were compelled to walk out on him in disgust. That’s the news. (Well, that and also more generally the fact that this House of Representatives continues to fail in its most basic duty of passing a budget on time. Again. Because these boys can’t even argue about an energy and water appropriations bill without veering off into a culture-war cul-de-sac about gays or feminists or evolution.)

The list of potential clobber-texts is notoriously short. There’s a dirty half-dozen biblical passages that the congressman might have invoked. Did he cite Leviticus? Because that kind of levitical cherry-picking tends to align with a particularly entrenched form of cognitive dissonance that’s particularly resistant to facts and reason. Did he cite Genesis 19? Because that suggests a level of biblical ignorance commensurate with his ignorance of the Bill of Rights. Or did he cite one of the litanies of vice in the Pauline epistles? That, at least, invites the opportunity for a more promising discussion of whether he, as a freaking Gentile, really wants to die on the hill of attempting a Pauline argument for exclusion. (Good luck with that.)

This is where Jennifer Shutt comes through for me, citing the specific chapter-and-verse invoked by Rep. Allen as the basis for his votes: “Georgia Rep. Rick W. Allen led the opening prayer by reading from Romans 1:18-32, and Revelations 22:18-19.”

Ah, OK, so Rep. Allen is a Romans 1 guy. That’s usually a slightly different creature than a Leviticus guy.

“This book” there refers to John’s Apocalypse — to Revelation and only to Revelation. Rep. Allen, like generations of white fundies before him, wants to change the meaning of “this book” there to mean the entire Protestant canon. He wants it to mean something that neither John nor John’s original readers could possibly have understood it to mean. He wants it to refer to something that did not exist in their lifetime and that did not come to exist until centuries after they died.

What this means for Rep. Allen is that clobber-texting from Romans is no different than clobber-texting from Leviticus. It means that any sentence excerpted from anywhere in the 66 books of the Protestant canon has the same meaning and authority (and genre) as anything purportedly carved on a stone tablet on Sinai. It means he reads Romans the same way he reads Leviticus, and that he’s reading both of them badly.

(General principle: Whenever you hear anyone invoke Revelation 22:18-19 in this way, understand that you’re not going to learn anything about the meaning of the Bible from this person. But you will learn a great deal about the inner-workings of their unfiltered id.)

As for Rep. Allen’s citation of Romans 1:18-32, I would normally award some bonus points for at least quoting the whole chunk of that argument from the chapter (an argument that continues through the first 16 verses of chapter 2). That’s arguably better than just taking an X-Acto knife to carve out the anti-gay clobber text. But my sense here is that Allen read the whole half of the thing just to get to this bit from verse 32: “Those who practice such things deserve to die.”

And due to Rep. Allen’s over-arching conviction that the state has a duty to enforce sectarian beliefs, one gets the sense that he thinks this has something to do with civil penalties and executions, rather than with the universal human need for redemption that Paul is arguing there.

Allen, like many others, seems to regard chapter divisions in the English translations of the Bible as impenetrable firewalls between unrelated ideas. So he doesn’t ever seem to have read Romans 1:32 and the very next verse on the same occasion, or to have ever considered that they might be inseparably related. He certainly doesn’t want anyone else to read those consecutive verses consecutively:

They know God’s decree, that those who practice such things deserve to die — yet they not only do them but even applaud others who practice them. Therefore you have no excuse, whoever you are, when you judge others; for in passing judgment on another you condemn yourself, because you, the judge, are doing the very same things.

The argument there in Romans 2:1-16 goes on to say that anyone judging others for a whole host of things — including, but in no way limited to “unnatural intercourse” of women with women or men with men — is thereby “despising the riches of [God’s] kindness and forbearance and patience” and displaying a “hard and impenitent heart.” Condemning those “unnatural” others, Paul says, will only mean that you are “storing up wrath for yourself on the day of wrath.”*

Everything in Romans 1 is prologue to this: “You have no excuse, whoever you are, when you judge others.” And to this: “God shows no partiality.”

I appreciate that Rep. Allen and I have very different perspectives on our first-century brother’s apparent discomfort with what he describes as “unnatural intercourse.” But set that aside for the moment. The key factor here is this: If you choose, as Allen does, to invoke Romans 1 as the basis for partiality and for judging others, then you are not just badly misreading this passage, you are — if Paul was right about anything — putting your very soul in jeopardy.

* Part of the reason that folks like Allen tend to balk at reading past the firewall and on into chapter 2 of Romans is this bit: “For [God] will repay according to each one’s deeds: to those who by patiently doing good seek for glory and honor and immortality, [God] will give eternal life; while for those who are self-seeking and who obey not the truth but wickedness, there will be wrath and fury.”

This is also why these folks have to tiptoe carefully around in the book of Revelation, where it’s a tricky business to steer around bits like this: “My reward is with me, to repay according to everyone’s work” or “And the dead were judged according to their works.”

Stuff like that — stubbornly, impossibly un-Lutheran stuff like that — is all over the place in the Bible, and most white evangelicals don’t know what to make of it other than to realize that saying stuff like that is forbidden and will get you in a world of trouble. So mostly we just pretend it isn’t there.

May 30, 2016 'Game of Thrones' and the Bible
Recent Comments
0 | Leave a Comment
Browse Our Archives
get the latest from
slacktivist
Sign up for our newsletter
POPULAR AT PATHEOS Progressive Christian
1