In 1973, 32 people were killed when an arsonist set fire to the Upstairs Lounge, a gay bar in New Orleans’ French Quarter.

It was a Sunday evening and the members of a new Metropolitan Community Church congregation had gathered there for services, followed by a $1 draft special and a piano-bar sing-along. It was a church fellowship hour, New Orleans-style, and the Upstairs Lounge that night was serving as a sanctuary in all the senses of that word that Broderick Greer writes about here.

Then the front door and the stairway into the bar were firebombed and the flames quickly spread. The church’s pastor, Bill Larson, was trapped in the fire. Assistant pastor George Mitchell escaped, but ran back in and died attempting to rescue others. His body was found alongside that of his boyfriend, Louis Broussard. Before the fire could be contained, 29 people were burned alive, another three died from their injuries, and 15 more were injured.

The picture below is from artist Skylar Fein’s installation “Remember the Upstairs Lounge,” originally at the Jonathan Ferrara Gallery in New Orleans and now at the New Orleans Museum of Art. 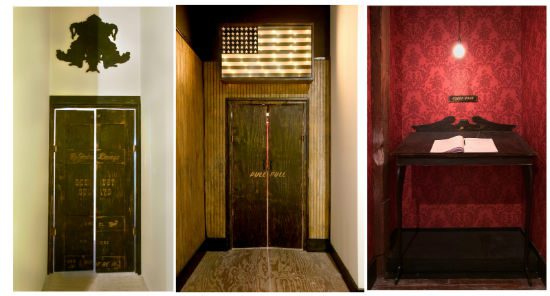 Liam Stack identifies a kind of grim progress in the markedly different public reactions between that 1973 tragedy and the massacre this weekend at the Pulse nightclub in Orlando.

The terrorist attack in Orlando that killed 49 and wounded 53 was the largest mass killing of gay people in American history, but before Sunday that grim distinction was held by a largely forgotten arson at a New Orleans bar in 1973 that killed 32 people at a time of pernicious anti-gay stigma.

Churches refused to bury the victims’ remains. Their deaths were mostly ignored and sometimes mocked by politicians and the media. No one was ever charged. A joke made the rounds in workplaces and was repeated on the radio: “Where will they bury the queers? In fruit jars!”

Outpourings of grief from politicians and everyday people have followed the Orlando shooting, but for those who remember the fire in the New Orleans bar, the UpStairs Lounge, its lonely memory has loomed large over conversations about the carnage this week at the Pulse nightclub.

The enormous change in public response might be more encouraging if the unit of measurement weren’t so horrifying. It is, undeniably, evidence of progress that our communities, our media, our politicians and churches have gotten better at publicly mourning the mass-slaughter of gay men. It is damnably indefensible that violence against LGBT people remains such a constant that it can serve as such a measurement of cultural attitudes over time. Our culture has gotten better at honoring the dignity of the victims of such slaughter, but our culture still produces and fosters the hate that produces such violence, targeting those same people for those same reasons and thereby denying their dignity in the most fundamental way.

I want to focus here on the response of churches. Many of the victims of the Upstairs Lounge fire, after all, were Christians who died in the sacred space where they met together to worship and to pray. The Rev. Troy Perry had founded the MCC just a few years earlier to provide such spaces for LGBT Christians turned away by the rest of the American church. He flew to New Orleans after the Upstairs Lounge fire, which had claimed the leaders, most of the congregation, and the meeting space for the MCC’s congregation in that city. As that Time article summarizes:

When Perry tried to find a site to hold the memorial, churches closed their doors. New Orleans was then 47 percent Catholic, but the archdiocese refused to help. Baptist churches hung up on him. An Episcopal church led by a friend of Larson’s held a prayer service but declined to host the memorial after the presiding bishop received dozens of angry phone calls and letters of protest.

… A week passed before Perry finally found a church willing to hold the memorial – St. Mark’s United Methodist Church. It was a brave move; the year before the Methodist denomination had decreed that homosexuality was “incompatible with Christian teaching.”

St. Mark’s was angrily criticized for hosting that memorial. That Episcopal priest who was a friend of Larson’s, William P. Richardson, was rebuked by his bishop and deluged with angry mail condemning him for mourning the victims of the fire.

As Stack reports, the public response from churches after the Pulse massacre has been very different. Religious leaders from most churches and denominations have expressed grief and sympathy for the victims (or, at the least, attempted to perform such grief and sympathy publicly). The condemnation directed toward St. Mark’s and the Rev. Richardson in 1973 are now more likely to be directed toward those who are now, like most churches then, silent — or toward the sick bastards at a handful of attention-hungry fundamentalist churches whose comments echo the vile sneering of radio hosts after the Upstairs Lounge fire.

But again, whatever progress that suggests is vastly outweighed by the fact that we are, today, just as in 1973, confronted by horrific lethal violence targeting LGBT people simply for the fact of their existence. And most of our churches are, today, just as in 1973, decreeing that their very existence is somehow “incompatible with Christian teaching.” Such decrees create a different kind of sanctuary and safe space, providing room for hate to flourish, unchallenged. Our churches have gotten somewhat better at grieving and mourning the victims, but they remain complicit in the culture that ensures there will always be more such victims.

Perhaps those churches didn’t fully understand that complicity in 1973. It seems impossible that they do not understand it now. And knowing the role they have played, it’s a wonder that all of these steadfastly anti-gay church leaders didn’t choke on their own words as they all, in turn, offered their lovely, duplicitous statements of grief and sorrow. You don’t get to spend months generating funds and fears based on where transgender people are allowed to use a bathroom and then turn around and act surprised when the people you have been demonizing are treated as less than human.

But let me end on a more hopeful note. This is from another 40th anniversary piece on the Upstairs Lounge fire, by Lisa Fullam, who describes what happened at that memorial service at St. Mark’s.

Troy Perry had assured those gathering for the memorial that no cameras would be allowed and that their privacy would be ensured. Understand that this was necessary, as Liam Stack writes: “Survivors had to deny any connection to the fire, including the loss of loved ones, because they could lose their jobs or apartments if bosses and landlords suspected they were gay.” The Time article recalls: “One victim, a teacher, was fired while in critical care at Charity Hospital after his school learned that he had been at the bar. He died days later from burns.” Protecting their privacy was, for these mourners, a matter of survival.

Remember that as you read this from Fullam:

At St. Mark’s United Methodist, something remarkable happened: during a memorial service led by MCC founder Rev. Troy Perry, and attended by some 250 mourners, word was spread that there was a press contingent outside, and they were assured that they could leave by a rear door. None did. The Times-Picayune reported: “the mourners sang the last verse of the hymn over again and, with the existence of press cameras outside the church still in doubt, they all filed out. None was seen leaving through the rear.” We can read the story of the UpStairs Lounge fire through many lenses, but one vision that sticks with me is this — 250 courageous mourners walking out of the church, despite the real risk of reprisals ranging from ridicule to much much worse. This was an important point in the history of gay civil rights, and in its way is a parallel to Stonewall, but with hymns.

June 16, 2016 The crops are all in and the peaches are rott'ning
Recent Comments
0 | Leave a Comment
"I would think that in terms of determining whether or not a fetus is a ..."
Christopher Bacon ‘Claiming the moral high ground’
"Saruman absolutely is. If "The Cleansing of the Shire" doesn't convince you of that, nothing ..."
Christopher Bacon ‘Claiming the moral high ground’
"The previous one isn't over yet."
Hawker40 ‘Our American Cousin’
"I don't care about changing hearts; changing behavior will suffice."
SororAyin ‘Our American Cousin’
Browse Our Archives
get the latest from
slacktivist
Sign up for our newsletter
POPULAR AT PATHEOS Progressive Christian
1