The crops are all in and the peaches are rott’ning

The crops are all in and the peaches are rott’ning June 16, 2016 Fred Clark

• Truth is stranger than forgery. Ariel Sabar attempts to trace the provenance of the allegedly ancient Coptic papyrus fragment that made headlines as the so-called Gospel of Jesus’ Wife. It reads like The Da Vinci Code re-written as an episode of Leverage.

This is a terrific example of what investigative journalism involves — painstaking grunt-work, phone calls, spelunking in libraries — but it’s also just a dazzlingly strange story. There’s a Berlin steam room like something out of le Carre and a Florida niche-porn outfit like something out of Carl Hiassen. Erich von Daniken has a cameo. Go read the whole thing.

• Perhaps I’ve missed it, but are the fundraising leaders of the “pro-life movement” paying any attention to the Zika virus? It seems like it ought to be a priority for folks who regard themselves as in the baby-saving business. A political movement genuinely dedicated to preserving the health of the unborn would seem like an asset during a public health emergency like Zika, but that doesn’t appear to be how this is playing out. It’s almost as if …

• “Sadly it is religion, including our own, that targets, mostly verbally, and often breeds contempt for gays, lesbians and transgender people. Attacks today on LGBT men and women often plant the seed of contempt, then hatred, which can ultimately lead to violence.” That’s from a Washington Post op-ed by Robert Lynch, the Roman Catholic bishop of St. Petersburg.

One gets the sense that Lynch might have liked to say more, but that this is as much as he felt he might be allowed to say. I’m grateful to hear this much, but I wish he had continued this line of thought — with or without permission. 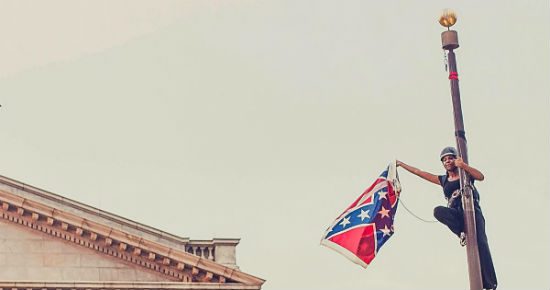 • “We call our brothers and sisters in Christ to discontinue the display of the Confederate battle flag as a sign of solidarity of the whole Body of Christ.” That’s a resolution passed by the Southern Baptist Convention.

Again, considering the source, I’m grateful for this baby step in the right direction. A year later, Southern Baptists have managed to claim for themselves a tiny, tiny fraction of the moral leadership demonstrated by Bree Newsome. For the SBC, that’s a huge improvement.

(Metaxas was also involved in the “Manhattan Declaration” — a staggeringly pompous document declaring its signatories to be the moral heirs and moral superiors of William Wilberforce, Rosa Parks, Martin Luther King Jr., John Wesley and, but of course, Dietrich Bonhoeffer.)

• The New Yorker reached into its archives and resurrected this February 1996 piece from Henry Louis Gates: “Hating Hillary.” It is dismayingly timely.

Since 2008, I’ve dreaded that the 2016 campaign would see all this noxious stew resurrected and recirculated by those credulous or ignorant enough to think that Whitewater was a political scandal rather than a journalistic one. Remembering all the sleaze that Scaife et. al. were capable of fabricating pre-Citizens United, I wasn’t looking forward to what they could do with unlimited dark money at their disposal. The surprising — and deeply disappointing — thing turned out to be seeing so much of that sleaze recirculated by self-proclaimed “progressives” only a few years older themselves than that essay by Skip Gates. Rule-of-thumb: If you’re parroting 20-year-old lies from the Scaife Foundation, you’re probably not being “revolutionary.”