OK, so, Rayford Steele is in church.

Right at 10 o’clock, Bruce began, but he asked Loretta to stand by the door and make sure any latecomers were welcomed.

We met Loretta about 20 pages ago, shuffling about the church office “sunken-eyed and disheveled, as if she’d come through a war.” She was in no condition to be greeting latecomers. Then again, maybe she was. Childless Loretta is still the only person we’ve met in the childless post-Rapture world who acts like an actual grieving parent.

The Rev. Bruce Barnes has put on his Sunday-best hairshirt and begins the service:

Despite the crowd, he did not use the platform spotlights, nor did he stand in the pulpit. He had placed a single microphone stand in front of the first pew, and he simply talked to the people.

Bruce introduced himself and said, “I’m not in the pulpit because that is a place for people who are trained and called to it. I am in a place of leadership and teaching today by default …”

Bruce continues in this vein for, oh, the rest of the book. He is extravagantly, luxuriously, insufferably humble. Every time we see him he’s flinching and cringing like a dog that was beaten by its previous owner and is now scared to be touched.

I get that Bruce is, like all the others present, a new believer. But even though he may have missed “the most important point,” as he puts it later, he has been “trained and called.” He has been to seminary and has spent years listening to Rev. Billings and learning all this stuff. And now he’s got a job to do and he really needs to stop pretending that he’s starting from scratch.

Bruce is like someone who just watched The Sixth Sense or The Usual Suspects for the first time. He should be like Chazz Palminteri at the end of the latter story, when he has that Kobayashi-coffee-cup shattering epiphany. In the context of Left Behind, Bruce has had just such an epiphany — the sudden realization not that he knows nothing, but rather that everything he knows means something other than what he thought it did. 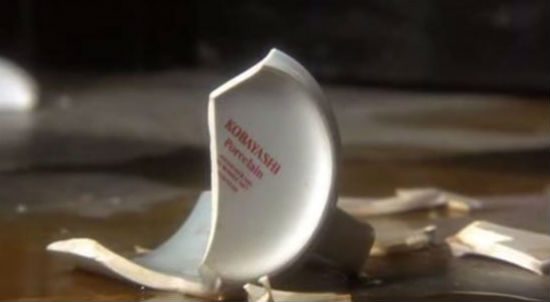 He shouldn’t be standing up there reeling in the faux humility of his prior ignorance. He should, instead, be empowered by his newfound revelation. He’s known the story all along, but he’s only just now realized what it means. He should be preaching like St. Stephen before his execution, or like St. Paul after his blinding, transforming epiphany on the Road to Damascus..

Instead, Bruce spends much of the book stumbling around Straight Street, caressing the scales on his eyes and wallowing in remorse. After a few pages of this exorbitant, indulgent self pity, I just want to dope-slap him and remind him that he’s got a church full of people and a job to do.

Note that this reaction is a kind of accomplishment for LaHaye and Jenkins. They have created, in Bruce, a character human-seeming enough to register as annoying. Progress, of a sort.

“I know you’re here seeking to know what happened to your children and loved ones, and I believe I have the answer. Obviously, I didn’t have it before, or I too would be gone. … We will not be singing or making any announcements, except to tell you we have a Bible study scheduled for Wednesday night at seven. We will not be taking any offering, though we will have to start doing that next week to meet our expenses. The church has some money in the bank, but we do have a mortgage and I have living expenses.”

Bruce considers himself unworthy to stand in the pulpit, yet worthy enough to take up a collection for his living expenses. The fact that the church’s mortgage and other financial obligations persist during the apocalypse raises some interesting questions about how the mortgage companies, utilities, credit card banks, credit scoring agencies and various other debt collectors would be functioning. Just because a third of the world’s population has vanished without a trace doesn’t mean these folks will hesitate in trying to collect. I imagine the credit-card lobbyists have already arrived in congressional offices with briefcases full of money to quickly amend the bankruptcy bill to clarify that the outstanding debt of the disappeared must be repaid by their closest unraptured relative.

And for someone who knows what’s coming in the Tribulation to follow, Bruce is oddly confident about the value of the church’s bank account. It’s not too soon for him to be withdrawing that money and stockpiling canned goods.

The decision to forgo the church’s usual announcements was wise. It would have been painfully awkward for poor Bruce to stand up there for 20 minutes saying things like: “The church nursery is closed today since all of your children have been ripped from their homes. Children’s Sunday school classes will be canceled, indefinitely. Vacation Bible School: canceled. Pioneer Girls: canceled. Boys’ Brigade: canceled. Children’s choir: canceled …”

But the key to this whole gathering is the first sentence of that paragraph above: “You’re here seeking to know what happened to your children and loved ones, and I believe I have the answer.” This isn’t really a Sunday morning worship service — it’s a mass funeral. As such, it’s remarkable how little Bruce says of the consolation of heaven. Remarkable, but not surprising. For most Christians, the promise of heaven is the source of eschatological hope that life makes more sense that it appears to in the finite context of this life. But in the world of Left Behind, eschatological hope has more to do with the schadenfreude of seeing evildoers punished — of seeing others proven wrong and the authors proven right.

Bruce again tells the story of his wife and children’s disappearance, then: “He showed the videotape, and more than a hundred people prayed along with the pastor at the end.” L&J then set up a scene that I’m eager to read:

[Bruce] added, “I know many of you may still be skeptical. You may believe what happened was of God, but you still don’t like it and you resent him for it. If you would like to come back and vent and ask questions this evening, I will be here. … Rest assured we will be open to any honest question.”

Kudos to Bruce for recognizing that this is an important function of the church: to be there for people who want to come and vent or ask questions (and to discern which is which and respond appropriately). I am, as I said, very much looking forward to this scene in the book. It will provide our didactic authors a perfect platform to address the many questions and objections readers may have, particularly to respond to Chloe’s still-unanswered question about how the events of the book can be reconciled with the idea of a loving God. I can’t wait to get to this part.

Following the massively successful altar call at the end of the video, Bruce next invites the newly converted to make a public confession. “Feel free to come to the microphone,” he says.

Rayford was the first to move, but as he came down the aisle he sensed many falling in behind him. Dozens waited to tell their stories, to say where they’d been on their spiritual journey. Most were just like he was, having been on the edges of the truth through a loved one or friend, but never fully accepting the truth about Christ.

L&J, as usual, never provide any specific examples. We never hear or see any particular person step up to the microphone and tell her particular story. But apart from the usual appalling writing, what’s deeply weird about this whole scene is that L&J describe the wrong event. They offer a dull, but passable description of a successful revival meeting, and it sounds very much like actual revival meetings I have actually witnessed. And therein lies the problem: This gathering should be nothing like the actual revival meetings I have actually witnessed.

I have never been to a revival meeting where everyone in attendance had just lost their children — lost every child they knew. For this traumatized group of people to respond exactly like a group that had not been through such trauma is just bizarrely inhuman. What on earth is going on? Why are these narcissists coming forward to talk about “where they’d been on their spiritual journey”? Spiritual journey? Your daughter is gone.

Their stories were moving and hardly anyone left, even when the clock swept past noon and forty or fifty more still stood in line. All seemed to need to tell of the ones who had left them.

So maybe this is just Bad Writing.

At two o’clock, when everyone was hungry and tired, Bruce said, “I’m going to have bring this to a close. One thing I wasn’t going to do today was anything traditionally churchy, including singing. But I feel we need to praise the Lord for what has happened here today. Let me teach you a simple chorus of adoration.”

Bruce teaches them a praise chorus and:

When the people joined in, quietly and reverently and heartfelt, Rayford was too choked up to sing. One by one people stopped singing and mouthed the words or hummed, they were so overcome. Rayford believed it was the most moving moment of his life.

That’s not how this is done.

As Bruce steps forward to say, “I’m going to have to bring this to a close,” the organist should have already started to play “It Is Well With My Soul.” Then Bruce should say something like, “So I’m going to ask Sister Loretta to come offer us a benediction” and Loretta should tap into all that loss she and everyone around her has just suffered and sing it in such a way that Horatio Spafford and Mahalia Jackson will turn to one another in heaven and say, “Yes, now she understands.”

(NOTE: This post was supposed to end with the phrase “That’s how this is done” as a link to an .mp3 of Mahalia singing “It Is Well With My Soul,” but alas, Typepad is not cooperating. So here’s a YouTube link instead.)

June 16, 2016
The crops are all in and the peaches are rott'ning
Next Post