Perpetually baby-faced Ralph Reed was once a rockstar of the religious right. He was known as the brains behind Pat Robertson, leveraging the influence — and the mailing list — compiled in Robertson’s 1988 presidential bid to make the Christian Coalition a major player in Republican politics and white evangelical spirituality in the early 1990s. He was a master of barbarians-at-the-gate fearmongering and fundraising, and of the sleazy “voter guide” push-polling that every religious right group has since tried to imitate.

And he did it all with a smile and an Eddie-Haskell-ish look of feigned innocence, giving his ambitious power plays a sweet aftertaste, like a cup of coffee laced with antifreeze.

Reed wasn’t the first religious right figure to mobilize “pro-life” evangelical voters in an attempt to prevent universal health care, but he was better at it than most, convincing millions of Christians in the early ’90s that denying health care to their uninsured neighbors was the best way to stop the Satanic baby-killers. Preventing the (Bill) Clinton administration from reforming health care became his greatest achievement — something he remains shamefully proud of.

In the mid-1990s, the Christian Coalition got bogged down in an FEC investigation and Reed jumped the sinking ship to pursue a solo career, vanishing from the national spotlight. (For a while I thought he’d become an actor, with a recurring role as Agent Alex Krycek on The X-Files, but it turns out that wasn’t him. Actor Nicholas Lea is actually better-looking than Reed, and Krycek was merely a murderous, backstabbing double-agent, and so not quite as awful as a Christian Coalition activist. But still, the resemblance was unnerving.) 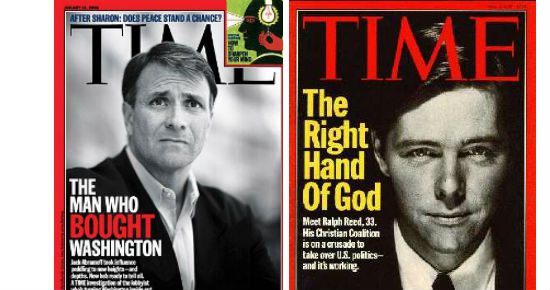 Reed kicked around for a bit as a Republican consultant and lobbyist. He served as the GOP’s state party chief in Georgia and flopped miserably in a bid to win his party’s nomination for lieutenant governor there. So for a decade or so he was occasionally in the news, but never on the front page.

That changed when multiple state and federal grand juries started handing out indictments against powerhouse Washington lobbyist Jack Abramoff. Abramoff eventually pleaded guilty to three felonies and went to prison for a complicated stew of crimes that involved money laundering and something like extortion — and that wound up fleecing Indian tribes of more than $80 million.

Basically, Abramoff was running a scam against tribes seeking to build or expand casinos on tribal lands. He’d get hired to lobby on the tribes’ behalf, then he’d get his partners to launch a noisy counter-lobbying effort to oppose Indian casinos, then turn around and force the tribe to pay him ever-larger sums to lobby against this opposition.

Abramoff’s partner was none other than Ralph Reed, whose history as a religious right activist put him in a perfect position to rile up white evangelical church groups to oppose immoral casino gambling. He was savvy enough to make a big splash, attracting lots of headlines, while still not doing anything so politically effective that it would damage Abramoff’s ability to eventually come through for his clients/marks — for an ever-growing, very large price.

In some accounts of this operation — for which Reed never faced any criminal charges — the level of extortion was far more explicit, with tribal groups asked to pay big bucks to make Reed’s “Christian” opposition to their planned casinos go away. It wasn’t too far removed from a blunt: “Nice casino you got planned here. Be a shame if anything happened to it.” But with the twist that instead of threatening to send goons with baseball bats and gasoline-soaked rags, the threat was that Reed would destroy the tribe’s plans by channeling the manufactured outrage of thousands of easily manipulated white Christians.

Again, Reed was never charged or convicted of anything. He was an unindicted co-conspirator. But it’s hard not to be repulsed by his sleazy, duplicitous behavior, or by his transparent willingness to strike a pose of righteous indignation right up until the moment when someone paid him to stop doing so.

Even Abramoff himself was skeeved out by his dealings with Ralph Reed. In an email exchange with his buddy Mike Scanlon, Abramoff described Reed as “a bad version of us.” They suspected Reed may have been skimming from their skim, and that he wasn’t doing all the lobbying they were paying him to do as part of their scheme to not do all the lobbying they were charging their clients to do. No honor among, etc.

The clear conclusion about Reed’s role in this is that his pious pose as a defender of “traditional morality” is a fraud. Here’s Alex Gibney in 2010, writing about “The Deceptions of Ralph Reed” for The Atlantic:

Let’s say it plain: Ralph Reed is a fraud.

… To recap, Ralph Reed worked for team Abramoff by mobilizing Christians opposed to gambling to shutter casinos. The only hitch: Reed was usually paid by other casinos who had a financial interest in eliminating their competitors. Therefore, Abramoff needed to find a way to make Reed comfortable, and to protect him against critics and the likely fury of his own Christian followers–who might have been upset if they had discovered that Reed was being paid by gamblers to do their bidding. The solution: Abramoff laundered the Indian casino payoffs to Reed by routing them through other organizations, including Grover Norquist’s Americans for Tax Reform and a phony “think tank” in Rehoboth Beach, MD, run by a life guard and a yoga instructor who were friends of Abramoff’s pal, Mike Scanlon.

… [Reed] was engaged in a kind of spiritual fraud: telling his supporters that he was opposed to gambling when, in fact, gambling was making him rich.

These days, Reed seems to be itching to get back into the spotlight and to re-establish his former role as a major player in Republican politics. For several years he’s been treading water for a bush-league outfit called the “Faith & Freedom Coalition” — one of those alleged “think tanks” that releases occasional press releases but doesn’t do much else besides give its staff enough of an appearance of institutional support to justify their occasional cable news appearances.

But yesterday, Reed made a bid for a return to credibility by signing on as a member of presumptive Republican nominee Donald Trump’s “Evangelical Executive Advisory Board.” Not just a plain, old advisory board, mind you, but an executive advisory board. Ooooh — executive!

Like his fellow Trump advisors — excuse me, I mean executive advisors — James Dobson and Richard Land, Reed seems to be hoping that basking in the cantaloupe-hued reflected glow of Donald Trump’s media spotlight will restore him to the prominence of his long-ago glory days. Just look at how the words “evangelical executive” and “Ralph Reed” appear together in all those news stories about Trump’s little panel. Doesn’t that confirm that Reed must be, officially, a leader in the evangelical community?

That strange logic apparently convinced some producer at National Public Radio, where Reed was invited as a guest today on Morning Edition to serve as a spokesman for evangelical Christianity. He’s back, baby!

But that may be the wrong way to look at this. This may just be a reprise of the same impulse that drove Reed to work with Jack Abramoff in the early 2000s. It seemed then, at first, that Reed was a wanna-be power-player who sought out Abramoff because the lobbyist was just the kind of Beltway kingmaker Reed aspired to be. But it turned out that Abramoff was running a scam and Reed teamed up with him because he wanted a piece of that action. Maybe that’s what’s drawing Reed to get involved with the Donald Trump campaign as well.

Like Reed, Trump has a history of enriching himself by shutting down casinos. Now he’s running for president — sort of. The structure and finances of his campaign operation don’t look like those of any legitimate national campaign that anyone has ever seen. A big chunk of his campaign funds are going to his own businesses, his family members, and even himself. The rest, apparently, is being spent on hats — and on shadowy, no-one-can-figure-out-what-they-do operations like Draper Sterling (a fake agency named after a fictional agency). So maybe Ralph Reed, yet again, has sniffed out a lucrative new scam, figured out a role he could play in its operation, and signed up for his cut of the take.

He made millions the last time around, while avoiding prison, so why shouldn’t he try it again?

In any case, Ralph Reed’s enthusiastic support for Donald Trump proves that his former claims of moral opposition to casino gambling were a dishonest sham. But then we already knew that.