It didn’t help that Trump yet again attempted to use evangelicalese — sounding, as Laura Turner put it, like he’d just bought a Rosetta Stone CD for learning to talk Christian. “We’ve gotta spiritize this country,” he told the crowd.

It’s not clear what “spiritize” means, exactly, but apparently it involves some kind of federal mandate requiring department-store employees to say “Merry Christmas” rather than “Happy holidays.” (When will they be required to say this? At the start of Advent? Or is that too high-church for non-liturgical evangelicals? So on Black Friday, then — letting Mammon spiritize the season? Would an Episcopalian retail clerk be punished/fined/fired/imprisoned for refusing to say “Merry Christmas” on December 23? What about if they said “Merry Christmas” on January 4? The details of Trump’s mandate haven’t yet been explained.)

• Kendra Weddle Irons: “If evangelicals cannot see this clear distinction between someone pandering for support from a faith community and someone whose lifetime of faith is reflected in her work, then they are simply not paying attention.”

She links to this video of Hillary Clinton’s 2014 address at the United Methodist Women’s Assembly. That’s not the first or the last time Clinton has spoken at Methodist women’s gatherings and conferences — she’s been doing that for decades, in public. (Transcripts of all those speeches are easily available, if widely ignored.) 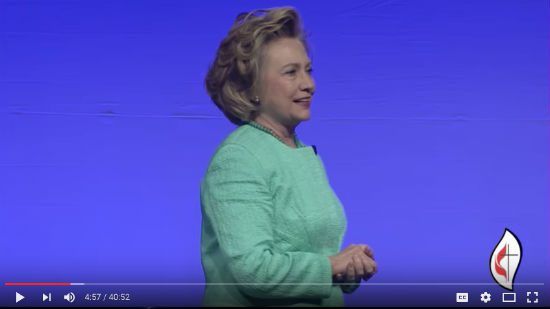 Does Clinton’s long-time habit of speaking at United Methodist women’s gatherings suggest that she is beholden to that group and its special interests? Yes. It suggests exactly that. So if you’re wondering what a Hillary Clinton administration might really be like, you’ll need to dive into the shadowy underworld of Methodist women’s groups — the hiding-in-plain-sight conspiracy of UMC women pulling the strings of their handmaiden puppet.

This is the menace — Church Women United and all it stands for — that Eric Metaxas describes as “an existential struggle” for America rivaled only by the Civil War.

• Leap year means 29 days in February and also a steady stream of articles fretting that Democrats need to do more explicit “religious outreach.” In the case of a long-time mainline Protestant like Hillary Clinton, that may seem odd until you remember that for cable news, mainline Protestants don’t count. (Their denominations are shrinking, after all, and have been for decades — so much so that these days they barely outnumber white evangelicals.) “Religious outreach” also doesn’t include Jews, Muslims, “nones,” Sikhs, atheists, or any other religious minorities. What it means, apparently, is obsequious gestures specifically intended to mollify white evangelical Christians.

With that in mind, I have a suggestion for Clinton. Earlier this week, she said this: “As we Methodists like to say: do all the good you can for all the people you can in all the ways you can.” That popular Methodist phrase is often mistakenly attributed to John Wesley, but there’s no evidence he ever actually said it (even if it’s congruent with many things he did say). That’s why Clinton, correctly, cites the statement only as something “we Methodists like to say.”

That’s the kind of pointy-headed intellectualism that infuriates the kind of evangelical Christians all the articles say she should be reaching out to. Hair-splitting distinctions about the proper citations of inspirational quotes take all the fun out of it. Plus, refusing to (improperly) credit evangelical hero Wesley with this quote is likely to strike white evangelical audiences as yet another example of Clinton trying to take something away from a white male.

• The SPLC notes that Donald Trump’s evangelical advisory board — oops, his evangelical executive advisory board — is “stacked with anti-LGBT activists.” We’re not talking about people who speak of “defending traditional marriage” or who say their faith requires them to advocate a “biblical model of the family” or people who tie themselves in knots trying to make “love the sinner, hate the sin” actually mean something coherent. We’re talking about people who routinely accuse LGBT people of being pawns of Satan bent on destroying America and preying on children.

This isn’t accidental, but I don’t think it’s primarily because Trump shares these folks’ aggressive animus toward LGBT people. What Trump wanted and needed from his executive advisory board was the support of evangelicals whose standing as evangelicals was beyond question in the evangelical community. That means these folks have to have a “firm stance against homosexuality,” because in the evangelical community, any question about the firmness of one’s stance against homosexuality raises questions about the firmness of one’s standing as a real, true member of the tribe. Rich Cizik’s undeniable evangelical identity and pedigree couldn’t save his job after he publicly endorsed some kind of marriage-like civil union for same-sex couples. But while hate-pastor Ken Swanson’s routine calls for the execution of LGBT people may draw criticism due to his “tone,” no one within the evangelical tribe will ever suggest that his extreme hatred toward LGBT people makes him less of an evangelical. (1 John might say that, but tribal gatekeepers never will.)

That’s something else “centrist evangelicals” might want to consider as they repeat their pleas for more “religious outreach” from Democratic politicians.

June 24, 2016 Good morning Britain
Recent Comments
0 | Leave a Comment
Browse Our Archives
get the latest from
slacktivist
Sign up for our newsletter
POPULAR AT PATHEOS Progressive Christian
1

'The atrocities that can be justified ... are...
"Many have asked how evangelicals could brush aside lying, bullying, adultery, and...
view all Progressive Christian blogs
What Are Your Thoughts?leave a comment
Copyright 2008-2020, Patheos. All rights reserved.