NPR’s Renee Montagne spoke with Republican strategist Mac Stipanovich today on Morning Edition. There’s a transcript of the story at that link, but you should click on the audio to hear Stipanovich’s weary tone and gallows humor. Here is a man who recognizes the basket-of-deplorables problem afflicting his party and who seems to realize that it may be a long road to recovery for the GOP.

Donald Trump’s second debate performance — which seemed entirely focused on rallying and riling up that conspiracy-addled base — is the backdrop for what Stipanovich says here:

MONTAGNE: And we do know that Donald Trump has really fortified his supporters. And I would say they’re even hardening as top Republicans flee from endorsing him.

STIPANOVICH: Yes, they’ve absolutely lost touch with reality. I mean, they’re literally face down in the Kool-Aid. I don’t think anything that could possibly happen would change that 35 to 40 percent of the electorate’s mind. They’re just locked in and will not give up.

MONTAGNE: So though, what then does this mean for the party after this election? If Donald Trump doesn’t win, it’s not as if they’re going away.

STIPANOVICH: Well, I think what you’ll see over the next couple of cycles, ’18 and ’20, is this thing is going to shake out one way or the other — either real conservative Republicans, you know, men and women of conscience and enough sense to come in out of the rain, will regain control of the party or they will leave the party. In many ways, I think that the election process itself will take care of this.

One of the things we’re going to learn here is that you can’t be crazy and win a large constituency general election. A couple of more of those lessons in statewide Senate races in ’18, governors races in ’18, where people who embrace Trump go down to defeat because of it, and I think you’ll start seeing that Republican candidates in primaries will be more moderate and get closer to the center right. So they have some chance of winning. What will be the cure for this is the actual outcomes on Election Day, not all the b.s. on social media.

MONTAGNE: But you’re still talking here — when you’re talking Trump supporters — a sizable number of voters. Can the Republican Party afford to lose them?

STIPANOVICH: Well, I’ll tell you what – I don’t know that we’ll lose them. Hopefully there’ll be some re-education. But if we have to lose them, then lose them we must. What Trump stands for is wrong. It’s bad for America. It’s bad for the party. And if we have to wander in the wilderness for a decade until we can get a party that stands for the right things and can make a contribution to the future of America, then we need to wander.

This is blunt talk: “absolutely lost touch with reality … face-down in the Kool-Aid. … [not] enough sense to come in out of the rain … crazy … all the b.s. on social media.” What he’s talking about is all the stuff Trump rattled off in the last debate that wasn’t so much false as pure fantasy — the Benghazi conspiracy theories, the San Bernardino slurs, the “giving $150 billion to Iran” stuff, the idea of crime spiraling out of control, immigrants “pouring into our country,” the Hillary-started-birtherism lie, all the Sidney Blumenthal business, the deep-in-the-weeds fever dreams about the damn emails. This isn’t so much a misrepresentation of the facts or the record as it is a trip through the looking glass. It’s not a set of lies intended to deceive ordinary members of the public, but an appeal to a subset of the public that prefers the fantasy to the reality. In the world of their choosing, these things are all true and they are all that matters.

Yes, I think the Fox News Republicans bear much of the blame for the rise of the movement that has now eclipsed them and sent them into exile. People like Stipanovich, Mitt Romney, John McCain, et. al., are to a large extent reaping what they’ve sown as the little lies and distortions they’ve winked at on Fox and talk radio have now grown into the Fib From Outer Space. Eight years of unwavering obstruction of President Obama wouldn’t have been possible without all those little lies, and without letting them grow every step of the way — all the while appealing to the more deplorable roots of anti-Obama sentiment that has now flowered into explicit white nationalism on the campaign trail.

Now their party has a nominee who is less a candidate for president than he is the dungeon master of a national fantasy role-playing game. That’s the appeal of Breitbart and Alex Jones for their readers and listeners. It’s a big fantasy game.

All the conspiracy theories about Benghazi, or San Bernardino, or Agenda 21, or Planned Parenthood, or Syria, or Blumenthal/Soros/The Jews aren’t lies intended to deceive the enthusiastic players of Trump’s base. They’re just part of the game. 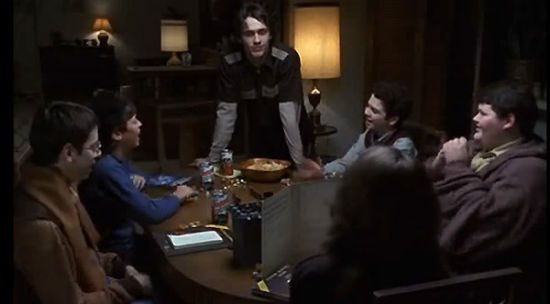 “You are standing at the opening of a large cavern lit by torches,” your friend says. “You can just make out a large chest in the shadows along the far wall.”

That’s not true. You’re not standing in a large cavern, you’re sitting in your friend’s basement looking at a folding table covered with dice and graph paper. But he’s not lying to you, he’s just playing the role of DM — setting up the parameters for the fantasy of the epic, heroic quest you’re imagining. The last thing either of you wants is for some spoilsport to wander in to “fact-check” what your friend is saying. That would ruin the game.

Trump’s followers have not been led astray, they have been invited to play along. And, for many of them so far, Trump’s national/nationalist fantasy role-playing game has been fun. They like this game. They like the grand adventure their DM is describing for them. They’re enjoying themselves.

But I don’t think all, or even most, of those supporting Trump really confuse the fantasies he spins with the real world. They aren’t as far gone as Tom Hanks in Mazes and Monsters — or as even farther gone as the panicking parents who imagined that movie was an accurate depiction of role-playing games. As and Trump dives ever deeper into his fantasy realm — egged on by his hard-core base of alt-right racists, MRAs, gamer-gaters and the like — he’s ruining the game for many of the folks who’d been willing to play along up until now.

So I think — I hope — that the “re-education” that Stipanovich talks about will be possible for many of the folks now eagerly following their DM Trump. (Not just “re-education,” though, but also repentance.) And I think, or hope, that Stipanovich is also right when he says that getting trounced on election day could contribute to their openness toward unlearning the fantasies Trump, Breitbart, et. al., have been teaching them. And it may help teach them to be a bit more skeptical of future DMs and demagogues.

That’s why the size of Trump’s defeat next month matters. He can’t just be edged out, he has to be swept away — utterly repudiated. This is especially true now that Trump himself seems to have pivoted from trying to win toward merely establishing the stab-in-the-back legend he’ll attempt to use to delegitimize his defeat.