“What were white evangelicals thinking?” Adam Laats asks at History News Network. Laats is a historian who’s writing a book on evangelical colleges and universities. That’s the universe of research he’s been immersed in for several years, so that’s the lens he uses to examine white evangelical support for Trump and Trumpism.

We need to grasp the true contours of the evangelical intellectual tradition.  That tradition has always made room for Trump’s brand of flag-waving, chest-thumping, America-First populism.  On the campuses of evangelical colleges and universities — the intellectual citadels of American evangelicalism — Trump-like attitudes have always found congenial homes.

He cites some older examples of nationalist boosterism from several Christian schools, then argues that this isn’t just a relic of the past:

Into the twenty-first century, too, evangelical colleges and universities have harped on an in-your-face patriotism.  Last year, for example, administrator Randy Beckum at Mid-America Nazarene University was demoted and embarrassed.  His crime?  In a chapel talk, Beckum reminded his evangelical audience that their religious values should come before their Trumpish ones.

As Beckum put it, “We have to be very careful about equating patriotism with Christianity.”  Even more careful than Beckum imagined, apparently.  For questioning the knee-jerk Americanism so prevalent among his students, Beckum found himself the target of evangelical attack and ridicule.

Donald Trump did just the opposite.  He may not have personally represented evangelical values, but he did speak directly to the ferocious love-it-or-leave-it patriotism that has always been an inextricable part of the white evangelical tradition.

John Fea, a historian who teaches at an evangelical school, Messiah College, respects Laats’ argument and is looking forward to his book. But Fea thinks Laats makes a mistake by seeing that business at Mid-America Nazarene as typical of evangelical colleges. He writes:

I would venture to guess that the overwhelming majority of the faculty and administrators at evangelical colleges and universities in the United States DID NOT vote for Donald Trump.

Fea has a follow-up post here, and he’s invited Laats to write a response for his blog as well (which I’m looking forward to reading).

I don’t think these two history professors are really in complete disagreement. What we have here, I think, is two folks discussing the relationship between evangelical colleges and Christian nationalism who are coming to the problem without quite the same understanding of either evangelical colleges or of Christian nationalism. On the latter point, I think Laats is addressing something broader than the specific, Barton-esque “America is a Christian nation” stuff that Fea dissects so well on his blog and in his book Was America Founded as a Christian Nation? (Spoiler alert: No.) 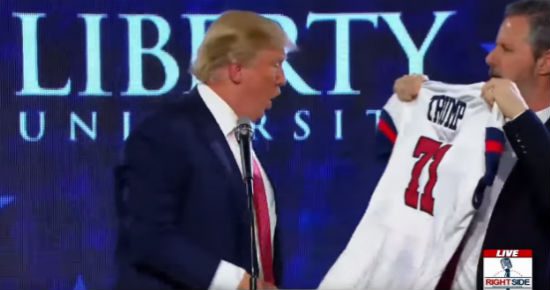 We’ll get back to this broader idea of Christian nationalism in a Part 2 post tomorrow. Today I want to focus on the two different understandings of evangelical colleges we find here. I don’t think Laats and Fea are in great disagreement about the character, identity and culture of most evangelical colleges. Their larger disagreement, rather, seems to be the location of those schools’ character, identity and culture. Laats is looking at administrators and officials, and thus also at trustees, directors, donors and parents. Fea is looking at faculty and students.

I suspect Laats would agree with what Fea has to say about the views of most faculty. But I’m afraid it wouldn’t be fair to ask Fea if he suspects Laats might be right about college presidents and donors. (If Laats is right about that, agreeing with him would be a dangerous thing for a professor to do.)

My sense is that Fea is correct about faculty and students. I wouldn’t bet against his guess that “the overwhelming majority of the faculty … at evangelical colleges” did not support Trump.* I’m not so sure about the administrators — particularly at the top levels. And I’m definitely not convinced that’s true of trustees, directors, donors and parents. Looking at that side of things, I’d guess that Laats is correct.

The gap here is something I’ve often described as the “faculty lounge” of white evangelicalism. In this case, that metaphor is on-the-nose — a literal faculty lounge as well as a figurative one. But it’s not just the faculty of evangelical colleges, universities and seminaries. It’s also a segment of seminary-trained clergy. Plus the editors of the larger respectable evangelical publications and publishing houses (Baker, Zondervan, Eerdmans, IVP, CT, etc., but not ThomasNelson, Word, Charisma, etc.).They’re a big part of institutional white evangelicalism, but not of popular white evangelicalism. And these folks are not culture warriors or Christian nationalists or young-Earth creationists.

I used to describe this sub-set of the subculture as the Books & Culture crowd, but, alas, I’ll have to come up with a new name now that that fine publication is no longer being produced (the faculty lounge has never been large enough to sustain such efforts for long). One could read reviews and essays in Books & Culture that matter-of-factly acknowledged the truth of evolution without any need for qualification or defensiveness, or for regarding doing so as in any way remarkable. For the writers and the readers, this reality is simply part of reality, and B&C was a safe space where such realities could be discussed thoughtfully, free from the need to defend them at every step as though one were taking a “controversial” stand on a “controversial issue.”

Evangelical colleges and universities tend to be another safe space for such thoughtful discussion — spared from the constant roiling witch-hunts and accusations and “controversies” of the tribal gatekeepers. Go to almost any accredited evangelical college or university and you will find professors of biology and geology and astronomy who teach evolution and acknowledge the reality of deep time without needing to debate the proposition at every turn. Freshmen, many of whom come from evangelical homes and churches where such scientific truth was regarded as anti-Christian, are sometimes unsettled by such material, but these professors are usually quite good at helping them to understand that the age of the universe is not an attack on their faith.

At the same time, though, those biology classes become something like a shared secret. Here in this classroom, we all agree that the Earth is 4.5 billion years old. But don’t go home and talk about this with your parents or the church you grew up in. That might get us all in trouble.

And it does, quite regularly, get those professors in trouble. Some Dolores Umbridge-ish parent or donor gets wind of what students are learning there in biology class and riles up a mob of Good Christian People to express their shock and extravagantly pious lamentation over such a shameful thing. College administrators — whose role is to keep those parents and donors smiling — admonish, censure, or force out these troublesome professors. Their replacements will continue teaching actual science, but they’ll learn from this example and do so with the door shut, and never in public.

The same thing happens in biblical studies classes and in every class at an evangelical seminary. These are also safe spaces for learning, but spaces that require that learning to be, and to remain, a shared secret. Shhh, don’t tell anybody back home, but Paul didn’t write the pastoral epistles. Keep this quiet, but Daniel isn’t a memoir. Get the right answer on the exam, but be careful about giving that same answer to anybody outside of the faculty lounge.

Alas, faculty and students are not in charge of those colleges. They’re run by administrators and trustees, and thus by donors. And those donors tend to have a very different view — of evolution, of biblical studies, of politics — than the faculty do. They tend, in fact, to view the faculties’ positions on all those things as a danger to godandamerica.

* It’s possible that both John Fea and I are wrong about this due to our having connections with evangelical-ish colleges that may not be typical of such institutions. I’m a graduate of Eastern University — “liberal” bastion of drinking, dancing and pernicious Campoloism. Messiah, where Fea teaches, has its roots in Brethren traditions that don’t fit neatly with the increasingly political nature of the culture-warrior white evangelicalism of the past generation. (I mean this as a great compliment.) It may be, in other words, that Mid-America Nazarene is more typical of most evangelical colleges — and Messiah less typical — than either Fea or I would like to think.