The conversation between historians Adam Laats and John Fea on the relationship between evangelical colleges and Christian nationalism is interesting on its own, but it’s also a terrific model of how to have such a conversation here in the realm of “social media” where the mutual respect and candor they’re showing isn’t always the rule.* Laats responded to Fea today, clarifying his own argument, where the two agree, and where they may still disagree.

I wrote yesterday that it seemed to me that Laats and Fea were working with different ideas of what constitutes “Christian nationalism.” Fea, who literally wrote a book on the subject, seems to be addressing a more defined ideology — the sort of explicit “America was founded as a Christian nation with Christian principles for Christians” business championed by David Barton. (He’s really good at analyzing and rebutting that stuff in general, and Barton in particular.) Laats, it seemed, was addressing a broader idea of “Christian nationalism.” He confirms that in his response today:

However the boundaries of evangelicalism are defined, whether in 1935, 1963, or 2016, schools need to remain squarely within them. More relevant, they need to be seen by the evangelical public as remaining squarely within those boundaries. If school administrators fail, students and alumni will vote with their wallets, taking their tuition dollars and donations elsewhere. …

Every school has certain poorly defined lines that no one is allowed to cross. Or, to be more precise, it means that the evangelical public needs to feel confident that the school as a whole is not crossing those lines, even if some students and teachers are. Or are rumored to be. …

This is just as true in 2016 as it was in 1935, and it’s true at more liberal schools as well as at more conservative ones. It is the reason why the intellectual tradition of evangelical schools, almost all evangelical schools, still plays a big role in creating an environment in which support for Trump flourishes.

I am not assuming that evangelical colleges are trapped in some sort of cultural meat locker, where attitudes from the 1950s have remained frozen in time. Rather, I am arguing that the ideas that fueled Trump’s success — including ideas of American exceptionalism, vague racial nostalgia, a sense that America was once “our” country — have always been and continue to be part and parcel of the self-understanding of white evangelicalism. And because of that, evangelical institutions of higher education have an existential need to maintain the perception that they remain congenial homes to families who hold those beliefs dear. 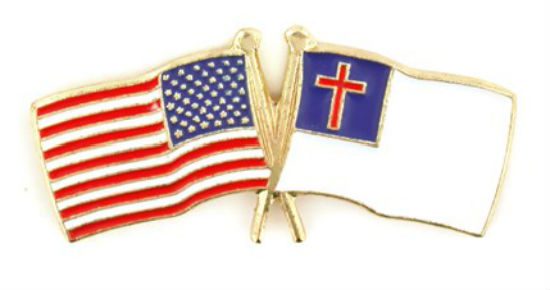 In between the first paragraphs I quote above and that concluding one, Laats discusses several examples to illustrate his point. We’ll get back to that in a bit, but first I want to redirect your attention to a piece I highlighted earlier this week as a “smart thing.” Jarvis Williams of the Reformed African American Network wrote about “5 Ways Christian Institutions of Higher Education Can Avoid White Supremacy.”

Williams offers a helpful parallel discussion that approaches similar concerns with a different framework — “white supremacy” rather than “Christian nationalism.” Or, perhaps, it’s the same framework with a different label. Here in America, after all, white supremacy and Christian nationalism have never been wholly distinct and cannot be wholly distinguished from one another. There’s maybe the thinnest old-moon crescent on either side of the Venn diagram of these two things, but for the most part they overlap as two different ways of describing the same ideology.**

It can be a fruitful exercise to go back and re-read the exchanges between Laats and Fea, substituting Williams’ term of “white supremacy” where they discuss “Christian nationalism.” Nothing else about their arguments would need to be changed and the dynamics of evangelical colleges they both describe would still be spot-on. Fea’s contention about the majority of faculty at [white] evangelical colleges would still stand. Laats’ argument that a total rejection of this ideology would jeopardize the perception of those schools as “safe [white] evangelical environments” is just as true.

This parallel is vital to understanding the most prominent example Laats cites of the gatekeeping role that “Christian nationalism” broadly retains at mainstream white evangelical colleges and universities: the DocHawk fiasco at Wheaton.

Laats’ summary of this is worth quoting at length (click through for Laats’ many links to articles providing more documentation and background):

If you didn’t follow the case, here it is in a nutshell: Professor Hawkins was the first tenured female African American professor at Wheaton.  She was fired for wearing a hijab in solidarity with Muslim women and for declaring that Muslims, Jews, and Christians all worship the “same God.”

Professor Hawkins was defended by Wheaton students.  She was defended by Wheaton faculty.  Yet she was fired.  She and the administration went back and forth several times, eventually agreeing that she would leave without being fired.  Why?  It wasn’t because faculty members actively demanded her ouster.  It wasn’t because students gave her a Randy-Beckum-esque heave-ho.  Rather, it was because her widely publicized thoughts made influential members of the evangelical public wonder if Wheaton had crossed a line.

Does this have anything to do with race?  With a Trumpish anxiety about Islam?  With a sense that the country used to be a better place but progressive changes have ruined it?

Let’s look at the fact of the case again:  She was an African American woman, wearing a hijab, proclaiming the essential one-ness of Islam and Christianity.  And she was fired for it.  I have a difficult time imagining that Trumpish anxieties did not play a leading role.

The administration insisted that the issue was purely theological.  And no doubt it was for many members of the wider Wheaton community.  But we cannot escape the overwhelmingly obvious connection to questions of race, gender, and Trumpish nationalism.  It is not that Wheaton professors were teaching that evangelicalism was the province of white males.  It is not that Wheaton students were prejudiced against women professors or African American ones.  Rather, the anxious leadership of the school, including trustees and influential alumni, could not risk the perception among the wider white evangelical public that Wheaton had somehow crossed a line, had somehow touched that institutional third rail.  They had to act decisively to quash any rumors that Wheaton had turned its back once and for all on the sorts of make-America-great-again notions that have powered Wheaton since the 1920s.

We don’t need to speculate about a “Trumpish” connection in this case. Dr. Hawkins explicitly chose to demonstrate her support and solidarity with Muslim-American women in reaction to a specific threat against them — a threat made, repeated, and embodied by then-candidate Donald Trump. Hawkins wasn’t just raising supposed theological concerns — that was always disingenuous spin, as Wheaton’s provost admitted when he called her allegedly firing-worthy remarks “innocuous.” She was standing up for the specific victims of Donald Trump specifically.

And doing so, in the view of Wheaton’s president, donors, and perhaps parents, cast doubt on the school’s reputation as a “safe [white] evangelical environment.”

The issue here is not that Wheaton’s administrators made a bad decision. The issue was that they imagined there was any decision at all that needed to be made. Nothing Hawkins said or did could be construed as “controversial” or troubling unless one was viewing it from within a pre-existing ideological framework of Christian nationalism and/or white supremacy. Those are what shaped not just Wheaton’s actions, but the bizarre idea that Wheaton needed to act at all. (The school never took any such actions when white male professors said and did similar things.)

Wheaton College (Illinois) is considered a top-tier evangelical school — perhaps the flagship of the fleet. But it’s not just the place that forced out a black female professor for criticizing Donald Trump. It’s also the place that forced out a celibate lesbian chaplain. And it’s the place that sued the government arguing that a fake-science lie about how birth control works was an essential component of its religious doctrine. No, they’re not requiring history students to read David Barton’s horrific books, but that doesn’t change the fact that the school is shaped and governed by something an awful lot like Christian nationalism. (And, thus, by something an awful lot like white supremacy.)

* That’s not primarily a function of these two guys being “nice” — although they are, in fact, nice. It’s a consequence of both of them arguing in good faith. Without that, disagreement itself isn’t possible, let alone honesty, mutual respect, or anything like what we misleadingly call “civility.”

Good faith is a prerequisite for civility. In its absence, GFY is not only an acceptable response, it is the only appropriate response and, really, the only possible response. Social media isn’t characterized by rampant incivility because people have bad manners. It looks like that because epidemic bad faith makes nicer manners impossible.

December 9, 2016 LBCF, No. 111: 'The Longest Day'
Recent Comments
0 | Leave a Comment
"Maybe trans people will become as powerful as millennials, destroying entire industries with a thought."
Amtep Enhanced clobber-texting methods
"I've played entirely too much FGO, because all I could think was "she would get ..."
Daniel McLellan The other way around (More on ..."
"And Fred Rogers.No, literally, Fox & Friends tried dragging on the late Mister Rogers about ..."
Daniel McLellan The other way around (More on ..."
"Darkonese Language/Culture Post #560 (Monsters-90): neurospastum (pronounced “nehoo*-ros-PAHS-tuhm”), carrionetteThis small construct resembles a common puppet ..."
Professor Rudolf Laschenkohl Enhanced clobber-texting methods
Browse Our Archives
Related posts from slacktivist