Are there 10 righteous sneetches in Sodom?

Young points to the terrific recent histories of the supposed “evangelical left” by David Swartz and Brantley Gasaway as further evidence of how marginal and inconsequential that tiny fragment of non-right-wing white evangelicalism actually is. Also true! But I think he misses what Mouw is attempting there. (And what the Jim/Ron/Tony orbit of “Moral Minority” evangelical progressives was attempting.)

The “#notALL” claim comes in different forms. The first of those — the one infamously popular on Twitter — is odious. It’s a dismissive reply of knee-jerk defensive indignation — a plea for exemption from a general truth and thus a kind of plea for special recognition and commendation for basic decency. It reacts to a general truth as a personal insult and thus demands that the individual be praised for not fitting this pattern — and that he (almost always “he”) be apologized to by anyone who offended his feelings by citing the general description without specifically mentioning his exceptional status, by name.

“Jersey drivers are so aggressive.”

“I’m from New Jersey and I’m not an aggressive driver! How dare you impugn my driving? I demand satisfaction! I demand vindication!”

But #notALL “#notALLs” come in that form or serve that purpose. 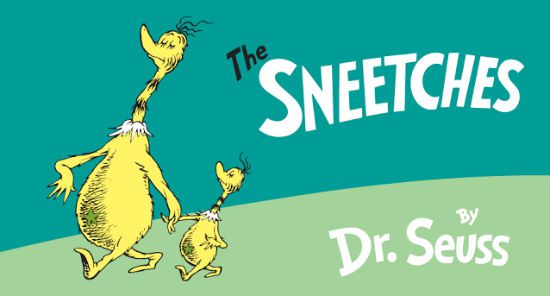 It can also be a statement of solidarity or consolation. (“All of my friends have deserted me.” “Not all of your friends.”) And it can be a way of showing that there are other possibilities — alternative ways of being that can and do exist.

“Sneetches hate star-bellied sneetches,” is the general rule. But #notALLsneetches. The exceptions matter. Pointing them out matters.

“Sneetches hate star-bellied sneetches,” says a young sneetch, troubled that they are fated and required to live bound by the strictures of this general rule. “Not all sneetches,” is an important thing for that young sneetch to learn. It reminds them that they have a choice — that something different is possible, that something better is possible. An exception may sometimes prove the rule, but an exception can also challenge its rule.

I think what Mouw is trying to do with his “I’m not quitting evangelicalism” piece is more akin to the latter forms of #notALL arguments. He isn’t trying to defend his tribe, but to remind those within it — particularly students and younger people — that different ways of being are possible even for those within that tribe. He’s not defending white evangelicalism, just attempting to redeem it.

And that, I think, brings us to the real focal point of disagreement between Young and Mouw — between the historian who studies white evangelicalism and the pastor/professor who is a part of it. Young, standing back and viewing the thing as it is, does not believe that white evangelicalism can be redeemed or that it is worth redeeming. Mouw believes that it is and that it can be. (And of course he does — he’s an evangelical, after all, so he believes redemption and salvation are always possible.)

This exchange thus reminds me, in a way, of the weird story in Genesis 18. God shows up at Abraham’s tent and they all sit down for a nice lunch of non-kosher cheesesteaks before getting down to the business at hand. The city of Sodom is intolerably wicked, God says, so I’m going to destroy it. Abraham pleads on behalf of the wicked city:

And the Lord said, “If I find at Sodom 50 righteous in the city, I will forgive the whole place for their sake.”

Abraham answered, “Let me take it upon myself to speak to the Lord, I who am but dust and ashes. Suppose five of the 50 righteous are lacking? Will you destroy the whole city for lack of five?”

Again he spoke to him, “Suppose 40 are found there?”

Abraham eventually succeeds in haggling God down to 10. If they find just 10 righteous people in all of Sodom, the city will be spared.

Alas, that turns out to be 10 more than can be found in the wicked city, which enjoyed “pride, excess of food, and prosperous ease, but did not aid the poor and needy. They were haughty and did abominable things.” And so you know how that story ends — fire and brimstone and pillars of salt and drunken incest (this is why the Flannelgraph Bible stories collections skip these chapters).

Young and Mouw seem to agree that the majority of white evangelicalism just demonstrated something haughty and abominable by rallying behind a demagogue whose election will mean very real harm to the poor and needy. But they disagree on how many righteous Sodomites might still be found despite all that. They disagree on whether or not this proud, prosperous enterprise has enough good in it to make it worth saving.

That question, ultimately, rests on the same criteria as in that story in Genesis: “I must go down and see.”

Mouw is hopeful that we will find a still-burning remnant of justice that can be nurtured into a larger flame. Young thinks this is wishful thinking:

Understandably, many evangelicals — perhaps even some who voted for Trump — want to distance their faith from its association with the president-elect. Trump is a tyrant and a demagogue who demonstrates no Christian principles, evangelical or otherwise. Evangelical critics of Trump are right to worry about how their fellow believers’ strong support for him will damage their faith’s reputation and public witness.

But advancing historically indefensible claims and naïve predictions that white American evangelicalism has ever been or will ever be anything other than steadfastly conservative in its politics and public influence is no way to handle the fallout from its linkage to Trump. That relationship represents neither a historical anomaly nor a minority position. To suggest otherwise only magnifies the lie.

December 19, 2016
Within weeks they'll be re-opening the shipyards
Next Post

December 21, 2016 The clarity of a dead end
Recent Comments
0 | Leave a Comment
Browse Our Archives
Related posts from slacktivist