The culture wars and the class war have merged

The culture wars and the class war have merged February 6, 2017 Fred Clark

“In a sign of what’s to come for the US Food and Drug Administration (FDA), President Donald Trump told pharmaceutical company CEOs Tuesday that his administration will be ‘cutting regulations at a level no one has ever seen before.'”

“George W. Plunkitt. He Seen His Opportunities, and He Took ‘Em.”

“Ryan claims that Obamacare has put Medicare under deeper financial stress. Precisely the opposite is true.”

“I love this new world, I no longer have to be politically correct.”

“Spencer and Miller first came to know each other in the late 2000s as students at Duke University, where they both belonged to the Duke Conservative Union.”

“Anything we can do to keep from having abortions, or to keep them from not knowing what is available, I will support.”

“The State of Oklahoma strongly urges you to contact them if you are pregnant.”

“Repealing the Affordable Care Act would result in 32 million Americans losing their health insurance by 2026, according to an analysis published [Jan. 17] by the Congressional Budget Office (CBO) and the Joint Committee on Taxation. … The CBO also calculated that in the first new plan year after enactment, premiums for those in the individual market would have risen by 20-25 percent, and then would almost double by 2026.”

“Brandi’s could be the story of thousands of LGBTQ men and women born to evangelical families.”

“Jewish community centers in 17 states were evacuated [Jan. 18] following a wave of bomb threats, which echoed a similar grouping of threats on Jan. 9.”

“Maybe the media should take a hard look at how it covers a predictable, lightly attended act of agitprop which claims to represent hundreds of thousands of people who never show up.”

“Most Trump evangelicals I talk with love his recent executive order banning refugees from Muslim countries.” 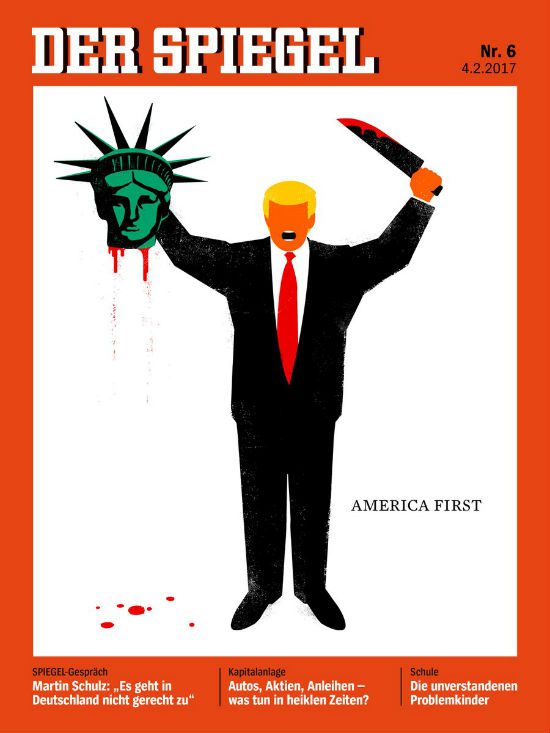 “While the White House scrambled to contain the widening furor over his ban on refugees and immigrants from seven Muslim-majority countries, the administration was laying the groundwork for a vast expansion of the nation’s deportation system.”

“This action benefits no one, except facilities who have harmed animals and don’t want anyone to know.”

“Quite simply, Trump is trying to bully federal judges out of ruling against him and suggesting those that do are not ‘legitimate’ members of the federal courts.”

“So every policy move Trump makes can be used to enrich himself and his family personally with no legal obligation for anyone outside the family to know about it.”

“The resolution to erase the prepaid rules are just the beginning of the new administration and legislature’s action to weaken the CFPB’s ability to protect consumers and financial regulations.”

“I have a very hard time believing that the net effect of pumping $40 billion worth of weapons into the world in a single year can possibly be to reduce the level of global violence and or avoid increasing the lethality of conflict.”

“Where alt-facts prove more devilish than old-school lies, even the cleverly concealed ones, is in their abandonment of reality altogether, their leap from the verifiable to the realm of pure belief.”

“Historical studies suggest that it takes 3.5 percent of a population engaged in sustained nonviolent resistance to topple brutal dictatorships.”

February 6, 2017
Ezra isn't the Good Guy in this story
Next Post

February 7, 2017 I'm just weary to my bones
Recent Comments
0 | Leave a Comment
Browse Our Archives
get the latest from
slacktivist
Sign up for our newsletter
POPULAR AT PATHEOS Progressive Christian
1