We would have taken part with them

We would have taken part with them February 9, 2017 Fred Clark

“Ever wonder what it’d be like to go back in time and help fight nazis? Support Civil Rights Era? Resist Native genocide? Now’s your chance.”

Variations of the above have been making the rounds on social media. And they are, alas, correct. The sentiment there gets at two things that are true: One true thing about the current moment in history, and one true thing about ourselves.

Most of us learned about the previous great struggles and moral crises of history and we imagined what we would have done if we had been there. We read about those who behaved heroically, bravely standing up for what was right, and we want to think that we might have done the same. And we read about those who behaved wickedly and want to think that we would have known better and done better and been better.

Sometimes we even remember the larger majority of people back then — the ones who were neither heroes nor active villains, but who just went along with their lives. By-standers. We like to think we wouldn’t have been like them, either.

This is human nature. We humans have always reflected on the past and wondered what we would have done if we had been around back then. And we’ve always been tempted to reassure ourselves that we would’ve been on the right side.

The Gospel of Matthew was written nearly 2,000 years ago, but it presents Jesus talking about people back then doing the very same thing.

Woe to you, scholars and pastors, hypocrites! For you build the tombs of the prophets and decorate the graves of the just, and you say, “If we had lived in the days of our ancestors, we would not have taken part with them in shedding the blood of the prophets.” … Fill up, then, the measure of your ancestors. … I send you prophets, sages, and scribes, some of whom you will kill and crucify, and some you will flog in your churches and pursue from town to town, so that upon you may come all the righteous blood shed on earth, from the blood of righteous Abel to the blood of Zechariah son of Barachiah, whom you murdered between the sanctuary and the altar. Truly I tell you, all this will come upon this generation.

The Abel-to-Zechariah bit there works nicely as an A-to-Z span in our English translations. For the original readers, that span entailed something else, ranging from Abel, the first righteous martyr named in the Hebrew scriptures, to Zechariah, the last such martyr. Matthew’s Gospel muddies that a bit by (probably) getting its Zechariahs mixed up, which you can read all about in most commentaries on this passage.

But that’s not the point. And so that’s why I don’t recommend turning to those commentaries to better understand this passage in Matthew.

What you should read, instead, is this piece on The Toast last year, by Mallory Ortberg: “Reasons I Would Not Have Been Burned as a Witch in the Early Modern Era No Matter What I Would Like to Believe About Myself and Would Have in Fact Been Among the Witch-Burners.”

That’s a brilliant, very funny bit. It’s also, I think, the beginning of wisdom. The joke here — the surprising, startling thing — is the way she exposes and rejects one of the most pervasive, enduring, and morally toxic bits of bullshit we all usually accept and preserve without thinking. 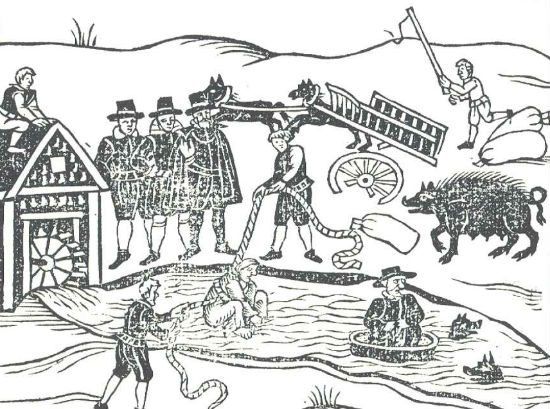 When we first learn about the hanging of witches in Salem or wherever else, we hear and absorb this story the same way we do the story of Cain and Abel. We’re Abel. If that had been us, we’d have been Abel. Or, if we stretch a bit more, we can just barely imagine that we might be Cain, except that if we had been Cain, then we would not have killed Abel.

This is what we always say, what we always need to tell ourselves about ourselves: “If we had lived in the days of our ancestors, we would not have taken part with them in shedding the blood of the prophets.”

This is something we’ve been telling ourselves for thousands of years.

But I don’t think Jesus is simply calling out their hypocrisy. I think he’s getting at something deeper — something causal.

And as soon as we let ourselves start to think that, we wind up doing exactly what we tell ourselves we would never have done back in the day.

Liane Carlson echoes Jesus’ warning in a thoughtful, insightful essay for The Revealer, “Moral Luck and the Fantasy of Fascism.” She takes great care to explain that the threat of fascism is not a mere fantasy — it is a real, and growing, thing. But that this very real moral struggle presents us with the dangerous temptation to think of ourselves in terms of “if we had lived in the days of our ancestors …”

The invocation of fascism fulfills a fantasy, even if the parallels between now and the Third Reich are true. Not a fantasy of finally knowing what to do, but a fantasy of finally knowing who to be. It’s a fantasy of a moral universe where our characters are no longer judged by the thousand tiny ways we fall short of the common good — driving a car, sending our children to private schools, guiltily choosing which charity with bloated overhead to contribute not-quite-enough money to — but by where we stand on the most important issue of our time. If we can just sign the right petition, attend the right march, we will no longer be the moral mediocrities we have always feared we are; we will be counted among the righteous. In the final analysis, it’s a fantasy of being on the right side of history.

This is the danger of falling into the trap of all witch-hunters and pro-lifers — the soul-killing poison of coming to imagine ourselves as heroic champions in battle against Satanic baby-killers and superlative evils that make us, by contrast, superlatively good. It’s the danger of needing to see ourselves as living in the days of our ancestors and being better than they were — a need that leads us to see others as devils but to see ourselves as uniquely not. And that is, as Lewis said, “the first step in a process which, if followed to the end, will make us into devils.”

There’s a lot to chew on in Carlson’s essay, including this kicker at the end:

It may well be that the fantasy of being on the right side of history is a necessary one in times like this. It might be the dream of redemption in a moment of historical crisis is what gives weight and motivation and meaning and beauty to resistance. But if I am right and comparisons to Hitler’s Germany do promise a sort of redemption, then let’s be clear on what that redemption is from — a reading of systemic violence that makes everyone complicit. If Trump’s America really is the new Third Reich, violence is finally localized and manifest in a malevolent government that a heroic individual can stand clearly against. It’s a dream of moral absolutes that academic analysis has spent thirty years trying to problematize. And if that’s the case, the Women’s March on January 21st was a warning shot to Trump but also, I think, to us. The idea that violence is systemic, societal and structural might well be a casualty of a fight between the Trump administration and a newly mobilized populace that needs the dream of clear moral battle lines for the movement to survive.

But all of this is difficult to ponder and a bit too abstract to put to practical use. Plus it’s not as funny as Mallory’s piece.

This seems to be necessary if we are to ever hope to do anything beyond simply filling up the measure of our ancestors. If we want to break the cycle and end the killing of the prophets, then we need to let go of the need to imagine we’re already intrinsically capable of the courage and love that will require.

That’s important, because the tweet quoted at the top of this post isn’t wrong. History is never settled, and it seems to be coming more unsettled day by day. The great strides toward justice of the Civil Rights era are, indeed, in jeopardy of being dismantled piece by piece. We are, yet again, living in the days of our ancestors. And if we hope to become the heroes of this story then we need to start by reminding ourselves that we aren’t those heroes yet.

February 8, 2017
But you can't expect to be bright and bon vivant
Next Post