Reading this section of the book is painful and disorienting. It has the unreal, detached sensation of a hangover after a lost weekend.

The last thing we knew, we were at the Plaza, talking to Nicolae, but now, suddenly, we’re back at Buck’s apartment. How did we get here? The authors fill in the blanks with a flashback of the end of the conversation at the hotel, but the pieces don’t seem to fit. Something shameful happened there, but their groggy retelling of what that was blurs that part of the story. Neither Buck nor the authors seems willing to admit what really just happened.

Buck Williams had returned to his apartment after midnight, assured by Nicolae Carpathia that his worries were over.

It is “after midnight” — several hours after midnight. At midnight, Buck was back on Marge Potter’s couch, watching the end of Nightline. It was already after midnight when he got into a cab, rode to the Plaza, eluded the police, wrestled with a rival reporter, conducted a lengthy, but weirdly off-the-record, interview with the president of Romania, and then took another cab home.

The fuzzy timeline here is inconsequential, though, compared to the authors’ fuzzy apprehension of why Carpathia has assured Buck that “his worries were over.” Buck literally just made a deal with the devil.

Carpathia had phoned Jonathan Stonagal, put him on speakerphone, and Stonagal had done the same as he made the middle-of-the-night [i.e., 6 or 7 a.m. GMT] phone call to London that cleared Williams. Buck heard Todd-Cothran’s husky-voiced agreement to call off the Yard and Interpol.

The problem with a speakerphone when someone is promising that they’ll stop trying to have you killed is that you can’t see whether or not they’re crossing their fingers. Here are some demonstrably ruthless men. Just yesterday, they incinerated a police officer. They have entire police agencies working for them. Before this phone call, they were trying to have Buck arrested and extradited — if they even let him live long enough to get on the plane (“We haven’t quite decided yet whether he committed suicide or died trying to escape”). Yet after this phone call Buck is perfectly satisfied that everything is hunky-dory between him and the Global Conspiracy of Evil. 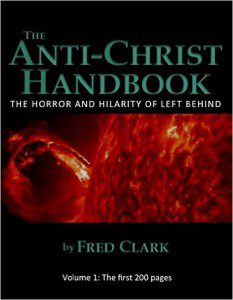 Let me just interject a bit of advice here: If you should ever find yourself marked for execution by an international conspiracy willing to stop at nothing until you are dead, and then, the day after they planted a bomb in your car, you talk to the conspirators on the phone and they abruptly inform you that you no longer have anything to worry about and you’re perfectly safe now — don’t trust them. Change your name, dye your hair and start over again in a faraway city where no one knows who you are.

Buck assumes he’s safe because the preternaturally charismatic Nicolae has told him so, and he seems to have used his Antichrist mojo on Buck’s behalf. Nicolae has also reframed the situation for the conspirators — let Buck live and they’ll keep their names out of the paper, avoiding any controversy that could interfere with their plans at the U.N.

Why should they accept this rather than making sure Buck stays quiet the same way they made sure Alan Tompkins and Dirk Burton stayed quiet? Because Buck has joined the team. He has promised not to report on what he knows, effectively making himself a part of their conspiracy.

“But my package is secure?” Todd-Cothran asked.

Most alarming to Buck was that Stonagal did his own dirty work, at least in this instance. Buck had looked accusingly at Carpathia, despite his relief and gratitude.

“Mr. Williams,” Carpathia said, “I was confident Jonathan could handle this, but I am just as ignorant of the details as you are.”

“But this just proves Dirk was right! Stonagal is conspiring with Todd-Cothran, and you knew it! And Stonagal promised him his package was secure, whatever that means.”

“I assure you I knew nothing until you told me, Buck. I had no prior knowledge.”

“But now you know. Can you still in good conscience allow Stonagal to help promote you in international politics?”

On Buck’s behalf and at Buck’s request, Carpathia cuts a deal with Stonagal after which, “despite his relief and gratitude,” Buck lectures him for dealing with Stonagal. Seconds after Buck himself promises never to report what he knows about the conspiracy, he wags a finger in Nicolae’s face, condemning him for not immediately exposing it.

Faced with such astounding duplicity and hypocrisy, with Buck’s fervent condemnation of the very thing he himself is flagrantly guilty of, Nicolae has an epiphany: Buck would make a great press secretary.

Buck, alas, declines the job offer. He’s a busy man, after all. He’s got people to see, stories to bury, international conspiracies to cover up. Frankly, he’s swamped.

Buck jokingly recommends that Nicolae instead hire Eric Miller, the reporter he’d been wrestling with in the hallway:

He told Carpathia what had happened in the lobby, on the elevator, and in the hall before Miller introduced himself. Nicolae was not amused.

So, after realizing that Carpathia is buddies with the conspirators who killed Dirk and Alan because they were Getting Too Close, Buck mentions that his rival, Miller, might be Getting Too Close too. Later, Buck will seem genuinely surprised when Miller doesn’t show up for work the next day.

Through all of this, Buck seems convinced that Nicolae is innocent. Deadly, ruthless criminals are conspiring to install the Romanian as head of the United Nations, but Buck doesn’t think that Nicolae’s political benefit from their machinations entails any complicity on his part. He doesn’t even blink when Nicolae goes on to explain how he plans to transform the impotent diplomatic bureaucracy into a world-dominating military power.

The Antichrist explains his plan:

“Israel is particularly vulnerable, as they were before Russia tried to invade them. They were lucky that time, but the rest of the world resents their prosperity. They need protection. The U.N. can give it to them. …

You might think that the destruction of the entire Russo-Ethiopian Armada without a single Israeli casualty would have demonstrated, definitively, that Israel has all the protection it needs. But Nicolae, like the authors, has a checklist and the checklist says a peace treaty with Israel is the next thing to happen. An Antichrist has gotta do what an Antichrist has gotta do, even if it doesn’t make any sense at the time.

“… In exchange for the chemical formula that makes the desert bloom, the world will be content to grant them peace. If the other nations disarm and surrender a tenth of their weapons to the U.N., only the U.N. will have to sign a peace accord with Israel.”

As far as plans for world domination go, I don’t find this one particularly impressive. Nicolae’s plan is to ask every nation on earth to surrender their weapons voluntarily, destroying 9/10 of their arsenals and giving the rest to him. Why wouldn’t they? The authors can’t imagine any objections to such a scheme, and neither can Buck:

Buck sat shaking his head. “You’re going to get the Nobel Peace prize, TIME’s Man of the Year, and our Newsmaker of the Year.”

“Those certainly are not my goals.”

Buck left Carpathia believing that as deeply as he had ever believed anything. Here was a man unaffected by the money that could buy lesser men.

A man untainted by greed or the lust for fame and prestige. All he humbly wants is to create his only military superpower and to ensure that it’s the only fighting force on earth.

And so, finally, 80+ pages and 20+ hours after it began, the Longest Day comes to an end. Buck, who hasn’t slept or eaten since he got off the plane from Germany, is so tired he can’t even manage one more phone call:

At his apartment Buck discovered yet another phone message from Hattie Durham. He had to call that girl.

February 9, 2017
We would have taken part with them
Next Post