Don’t know a soul who’s not been battered

• Elizabeth Drew offers a first draft of history reviewing Donald Trump’s first three weeks in office. It is, by turns, horrifying, tragic, frightening, and utterly bonkers. And it’s all true.

This is not going well and it will not end well. I don’t expect Trump to survive the Trump administration. Whether or not the rest of us do, or our democracy does, or our Constitution, remains a coin on its edge.

1) Failed to offer a coherent explanation of the firing of Mike Flynn, raising more troubling questions about his own links to Putin.

2) Asked a black journalist to “set up a meeting” for him with the Congressional Black Caucus, suggesting the president does not understand how Congress works, and that he thinks all black people are friends or, possibly, relatives. He also, again, went on about “inner cities.”

3) Offered a softball question providing the chance to provide a simple, pro forma condemnation of anti-Semitism in the wake of bomb threats at dozens of Jewish community centers across America, Trump freaked out, weirdly twisting the question into a personal insult, accusing the reporter of “lying,” and saying, “Number one, I am the least anti-Semitic person you’ve ever seen in your entire life. Number two, racism, the least racist person.”

5) Mused about how great it would be to shoot at a Russian ship, but then explained that he had learned from his security briefings that nuclear war would be pretty bad, and that “nuclear holocaust would be like no other.”

6) Creepily praised his wife by saying “She was always the highest quality that you’ll ever find.”

6) “He mentioned Hillary Clinton 11 times.” Assured the public that “we had a very smooth rollout of the travel ban” (which he still insists should not be called a “ban”). And concluded by repeatedly insisting that he was not “ranting and raving,” a statement that belongs in the category of denials that generally go without saying unless the thing being denied appears self-evidently true, as it was. (See also Trump’s insistence that “I’m not a bad person.”) 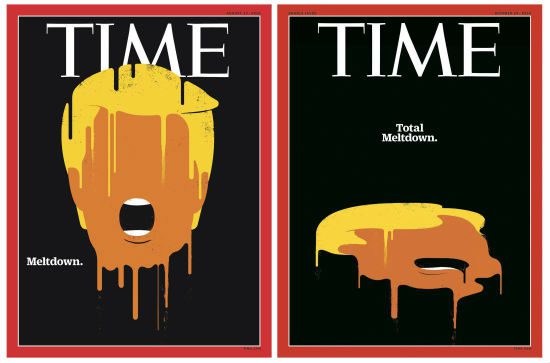 • I’m grateful for Robert Darnton’s “True History of Fake News” for teaching me the meaning and delightful etymology of the word “pasquinade.” And also for sharing the story of two 18th-century chaplains who laid the groundwork for contemporary church leaders like The Liar Tony Perkins and David Barton:

In 1772 the Reverend Henry Bate (he was chaplain to Lord Lyttleton) founded The Morning Post, a newspaper that piled paragraph upon paragraph, each one a separate snippet of news, much of it fake. … Bate, who came to be known as “Reverend Bruiser,” went on to found a rival scandal sheet, The Morning Herald, while The Morning Post hired a still nastier editor, also a chaplain, Reverend William Jackson, known as “Dr. Viper” for “the extreme and unexampled virulence of his invectives…in that species of writing known as paragraphs.” The two men of the cloth, Reverend Bruiser and Dr. Viper, slugged it out in their newspapers, setting a standard for scandal that makes the Murdoch press look mild.

• Speaking of the bruising, venomous Barton, it seems that one of his biggest fans — Pennsylvania state Rep. Rick Saccone — has announced he’s running for the U.S. Senate seat currently held by Bob Casey. Warren Throckmorton informs us that Saccone’s legislative “achievements” in Harrisburg include a proclamation declaring 2012 as “The Year of the Bible” and a push to have the slogan “In God We Trust” hung in all public schools in the commonwealth (as a stop-gap measure, one assumes, as Saccone is also part of the contingent pushing to have all public schools replaced by private and home schools). John Fea has more on Saccone.

• The titles of these round-up posts lately all come from this song. But you already knew that.

How Evangelicals Were Deceived Into Caring So Much...
Evangelicals have been deceived but do they know that? For many...
view all Progressive Christian blogs
What Are Your Thoughts?leave a comment