It is, at last, Tuesday. The previous Tuesday was the morning after The Event and Rayford Steele has had a very busy week since then, getting saved, pestering his daughter, creeping out Hattie, shopping for electronics, reading up on Romanian politics, flying to and from Atlanta, and calling poor Bruce Barnes at all hours of the night.

And now it’s Tuesday again. Rayford could never get the hang of Tuesdays.

Bruce Barnes called the core group together for an emergency meeting at New Hope Village Church [on] Tuesday afternoon. Rayford drove over, hoping it would be worth his time …

Bruce gathered everyone around his desk in the office … and then had everyone turn to the book of Revelation.

Well it’s about time, isn’t it? Bruce spent years at this church, listening to Pastor Billings preach sermon after sermon from the book of Revelation. Time and again he would have heard his boss say that this is the most important section of the Bible, the culmination of all that precedes it. He would have heard Billings stress that the meaning of every other section of the Scriptures — the histories, the prophets, the psalms and philosophers, the epistles and even the Gospels themselves — could only be understood properly through the prism of this strange final book which, he claimed, foretold a precise sequence of events. Now Billings is gone and the events he predicted have begun occurring in precisely the fashion that he predicted them — so why did it take Barnes a whole week to finally have everyone turn to the book of Revelation?

It makes sense for Bruce and his new congregation to dive into this study of prophecy with an obsessive urgency. They find themselves suddenly living in an apocalyptic world, so studying the Apocalypse seems like a logical step.

What I don’t understand, though, is why the Rev. Billings, who knew he would never live in such a world himself, spent so much of his time studying all of this. Billings’ belief that Revelation is the most important passage in the Bible turns out to have been true only for the few members of his congregation who were otherwise unaffected by his preaching — for Bruce and Loretta and the handful of other non-RTCs who were left behind. But for himself and the majority of his flock — for Irene and all the others who were taken — all those years spent preaching about Tribulation timelines, beasts, judgments and all the rest were just a waste of time.

Drilling your followers with the details of events that, by definition, neither you nor they will ever see seems like an odd understanding of Christian ministry. Even if Billings were right, such preaching would be bound to be fruitless.

In the religion of Tim LaHaye and Jerry Jenkins, of course, “rightness” is all that matters, i.e., that the propositions to which one attests are correct. The Rev. Billings is the embodiment of their idea of rightness, which is why the authors seem to take Billings’ fictional vindication — in a story they imagined and wrote themselves — as proof of their own actual vindication. But that earlier word, “fruitless,” also carries a theological meaning. If L&J had not, like Billings, wasted so much of their lives with an exclusive focus on supposed “prophecy,” they might have realized that the rest of the Bible teaches that to be “right” without bearing fruit is just another way of being wrong.

Anyway, back to Bruce Barnes:

“As you know, I’ve been studying Revelation and several commentaries about end-times events. Well, today in the pastor’s files I ran across one of his sermons on the subject. I’ve been reading the Bible and the books on the subject, and here’s what I’ve found.”

Bruce pulled up the first blank sheet on a flip chart and showed a time line he had drawn. …

I’ve included a rough sketch of this timeline here: 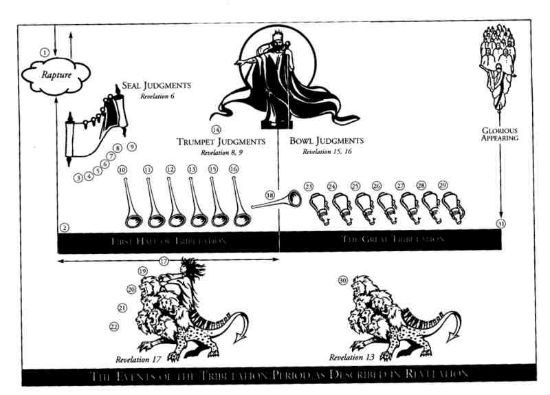 That’s actually one of Tim LaHaye’s own Tribulation timelines, one of many such attempts to represent the events described in Revelation as a straightforward, linear narrative progressing from Point A to Point B over the course of seven years.

Why seven years? Because, as everyone knows, that’s how long this Great Tribulation will last. If you’re wondering where in Revelation it says this, the answer is it doesn’t. The seven-year span comes from the ninth chapter of Daniel — which is also where the idea of Nicolae’s peace treaty with Israel comes from — in which we read of “70 sevens.” (Silly Daniel thought he was addressing the exiled Jews in Babylon, but LaHaye knows that he was really speaking to the enlightened American PMDs of the mid 20th late 20th early 21st century.)

The enthusiasm for these timelines arises partly from the challenge such a task presents. John’s kaleidoscopic visions don’t easily allow for such a straightforward, linear progression. This accounts for the wide variety of such timelines, most of which include something like Ptolemaic epicycles in their attempts to force John’s narrative into line.

One delightfully strange thing about PMDs is the way they earnestly insist that all they’re doing is providing a straightforward, linear reading of a straightforward, linear account. All the while they insist this they’re jumping to and fro — from Revelation to Daniel, to Thessalonians, back to an (earlier) chapter of Revelation, then to Ezekiel. Even as they tie themselves into knots flipping around, back and forth, to and fro, unable to work their way through John’s apocalypse from beginning to end without recursive loops back to earlier chapters, even as they themselves get lost in the convoluted mess of it all and they are forced back to the drawing board to try again to force this narrative into a tidy timeline — through all of that they seem utterly sincere in insisting that this impossible-to-follow-the-same-way-twice approach is really nothing more than a straightforward, linear and “literal” reading. It would be laughable if it weren’t so heartfelt.

No, scratch that. It’s still laughable.

Bruce Barnes displays this same naive approach here. He starts by having everyone open their Bibles to the book of Revelation but then he never once reads from it. For the next six pages of blatant exposition, Barnes works his way through his end-times timeline, implying that this is nothing more than what they all could simply read for themselves in the book of Revelation, yet he never has them read it for themselves because simply reading that book wouldn’t obviously result in anything like his timeline.

For the purposes of this story, of course, it doesn’t much matter what the actual book of Revelation says or means. On one level, quibbling about whether or not Bruce’s interpretation is legitimate makes no more sense than pointing out that “Gerald Fitzhugh” isn’t really the president of the United States, or that, in the real world, Ban Ki-moon’s service as secretary-general of the United Nations does not actually make him the supreme overlord of every nation.

Left Behind is a fictional world, and as such its creators are free to invent a fictional president, a fictional Manhattan that’s 50 miles long and a fictional U.N. with fictional powers. They are even free to invent a fictional Bible full of fictional prophecies. This is exactly what L&J have done. Their problem — and it’s a big problem — is that neither they nor most of their millions of devoted readers realize that this is what they have done. They recognize that “Fitz” is a piece of fantasy and imagination, but they think the equally unreal Bible in their story is the same one we have here in reality. They present an inhuman planet inhabited by alien creatures who hardly seem to care that all of their children have vanished and yet they imagine that this imaginary world is a realistic portrayal of realistic people. The main differences between the world of Left Behind and the real world are not the products of the authors’ invention, but the products of the authors’ mistakes.

In any case, Bruce is in too much of a hurry to bog down his emergency meeting with Bible-reading. He’s got to get through a thumbnail sketch of the entire Left Behind series in only six pages.

This is a rather unconventional form of exposition. Usually, exposition serves the purpose of bringing readers up to speed on what has already happened in a story. Not here. Bruce’s six-page expository suppository tells readers what is going to happen later in this series. This isn’t foreshadowing, it’s foreclipsing. His timeline may not have much to do with the actual book of Revelation, but it’s eerily prescient in foretelling what comes next in the outline L&J used for writing this book. I can imagine that form of prophetic knowledge providing the basis for an intriguing, Pirandello-ish bit of metafiction, but here it serves mainly as an embedded spoiler, eliminating whatever potential for suspense the series might otherwise have had. Foreshadowing can enhance suspense, fore-telling — which is what L&J believe they are doing here — just ruins the surprise.

Why would the authors do this? Why spoil their own story arc by summarizing it here in the middle of Book 1? I think this arises again from their confusion of fictional vindication and actual vindication. By writing a novel in which prophecies are foretold and then fulfilled, they believe they have not just illustrated but proven that the prophecies they claim to believe will also be fulfilled.

The difference between fact and fiction ought to be easier to discern if you’re the one writing the fiction, but for L&J that doesn’t seem to be the case.

February 19, 2017 Sunday favorites
Recent Comments
0 | Leave a Comment
Browse Our Archives
get the latest from
slacktivist
Sign up for our newsletter
POPULAR AT PATHEOS Progressive Christian
1

QAnon is a hoax designed for...
slacktivist
Related posts from slacktivist

We're born again, there's new grass on the...
Put me in, coach. I'm ready to play.
view all Progressive Christian blogs
What Are Your Thoughts?leave a comment
Copyright 2008-2020, Patheos. All rights reserved.