How did a ‘heart for missions’ lead to contempt?

The “10/40 Window” used to be a big deal in mission conferences at white evangelical churches. The numbers there are degrees of latitude, referring to the region between 10 and 40 degrees north of the equator — an area identified by American missionary agencies as most unreached by the message of the [white] evangelical [colonial, neoliberal, imperialist] gospel. 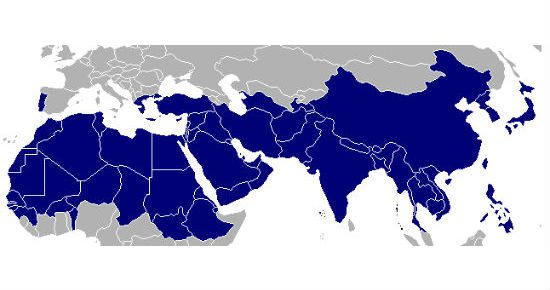 President Donald Trump is attempting to enforce a “temporary” ban on the U.S. granting asylum to refugees — with a particular focus on refugees fleeing war and persecution from countries within the 10/40 window. Trump is also seeking what he has repeatedly called a “Muslim ban,” attempting to forbid immigration from seven Muslim-majority countries which are all, again, located within this “window.”

Trump’s bans on refugees and immigrants have never had the support of a majority of the American people. When he first proposed these ideas in 2016, the Public Religion Research Institute found that only 40 percent of Americans approved of the idea. And the more that Americans have learned about these plans, the less they’ve liked the idea — with support dropping to about 35 percent today.

PRRI has found that support dropping across the board — among almost all Americans from almost every religious persuasion. Except one. In one, and only one, religious constituency, Trump’s blanket denial of asylum and “Muslim ban” enjoys majority support, and that support has grown over the past year. Can you guess which group that is?

Yep, it’s white evangelicals — the same folks who have spent the the past two decades praying for and “loving on” God’s children from all those countries within the “10/40 window.”

This tells us something about the efficacy of prayer. The most modest claim about the effect of prayer usually says something like prayer may not change God’s mind, but it changes us. It teaches us that praying for others is a good way to train ourselves to love those neighbors as we love ourselves.

That seems reasonable. It makes sense that years of prayer on behalf of other people would, if nothing else, form habits of concern and care on the part of those doing the praying. But here we have a powerful counter-example. The very same people who have spent years praying for those within the 10/40 window now seem to regard those people with exceptional contempt.

That suggests either that prayer doesn’t work the way we thought it did, or else that all those people have somehow been praying wrong. (Or, perhaps, both.)